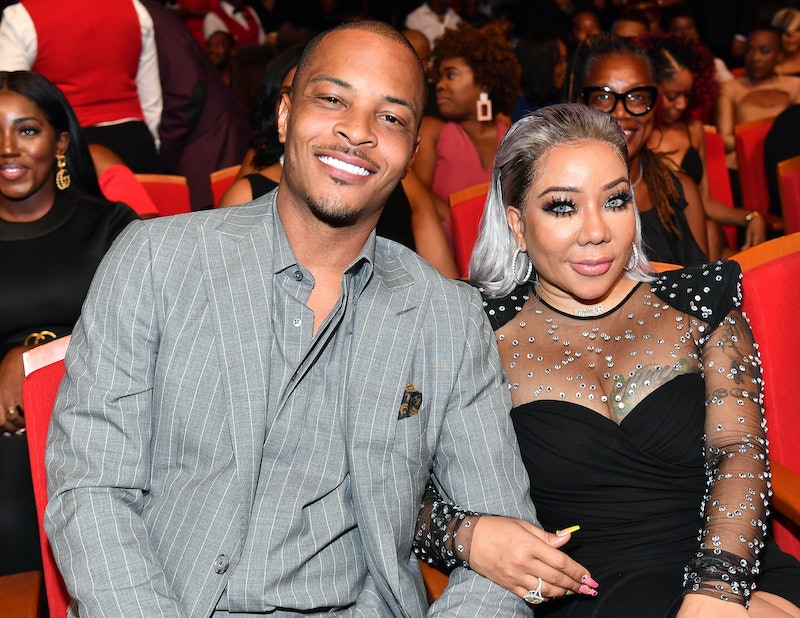 A week ago, T.I. revealed that he takes his daughter Deyjah Harris to the gynecologist to make sure her hymen is "still intact." And on Wednesday, T.I.'s wife Tiny responded to concerns about Deyjah after an Instagram user asked how she's doing. Turns out, Tameka "Tiny" Harris didn't need words to share her feelings. Her reaction to the Instagram comment included an emoji that makes her opinion crystal clear.

Following his controversial comments on the Ladies Like Us podcast— his episode has since been removed — T.I. ( née Clifford Harris Jr.) has kept surprisingly mum. So has his wife Tiny, that is, until now. On Wednesday, Tiny posted an Instagram of her and her hubby wearing ponchos. "Mi amor por siempre…" she captioned the photo. But, in the comments, one follower was more interested in talking about her daughter. "Is Deyjah okay? We care," they posted.

Tiny responded to the question with four rolling eyes emojis — a reaction that sparked about 300 more comments on the thread. When it came down to it, lots of Tiny's followers sided with her. "Tell them to mind they biz," Instagram user @shayluver3 commented, adding a crying eyes laughing emoji. Still, others expected her to give a more in-depth response to T.I.'s recent comments. Don't roll your eyes, one user named @destiny.leenyah wrote, "Your husband literally embarrassed her in front of millions."

Another follower defended Tiny's choice not to speak about her daughter. "Maybe her husband shouldn’t of put their business out on a podcast," @__aribarbie wrote.

This back and forth on Tiny's Instagram came two days after E! first reported that Deyjah had unfollowed both her parents and stepsister Zonnique Pullins on Instagram. While that may shine some light on how she feels about her dad right now, Deyjah has yet to publicly comment on what T.I. said last week.

During a recording of Ladies Like Us, T.I. revealed that he had been going to the gynecologist with his daughter since her sixteenth birthday. "I will say, as of her 18th birthday, her hymen is still intact," T.I. said. Following those comments, Deyjah liked tweets calling her dad "disgusting," "possessive" and "controlling." Later, she tweeted, "I loveeeeeee yalllllll." That tweet got 11.6k likes.

While T.I. and his family haven't spoken out publicly about the podcast episode, the hosts of Ladies Like Us, Nazanin Mandi and Nadia Moham, have apologized for how they handled the interview. "We were completely caught off guard/shocked and looking back," they wrote on Instagram. "We should have reacted much differently in the moment."

Since T.I.'s comments went viral, medical experts have spoken out against asking a gyno to confirm someone's virginity. “A virginity exam does not exist,” Dr. Maura Quinlan, an associate professor of obstetrics and gynecology at Northwestern University in Chicago, told The New York Times. “If someone brought me a girl for a virginity exam, I would tell them, ‘I can’t say either way.’”

More like this
Adam Levine Denies Having An Affair — But Admits He “Crossed The Line”
By Jake Viswanath and Radhika Menon
Everything To Know About Taylor Swift’s 10th Studio Album, 'Midnights'
By Grace Wehniainen and Jake Viswanath
What Demi Lovato Really Thinks About Child Stardom, Depression, & Sobriety
By Radhika Menon
Kanye West Apologizes To Kim K "For Any Stress I Have Caused" In Rare Interview
By Jake Viswanath
Get Even More From Bustle — Sign Up For The Newsletter