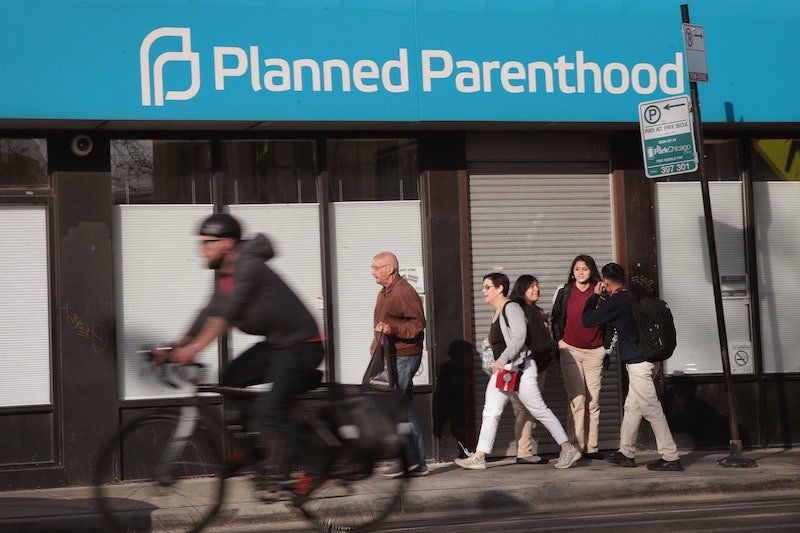 Planned Parenthood announced Monday that it would officially withdraw from the Title X family planning program due to an anti-abortion rule issued by the Trump administration earlier this year. In addition to Planned Parenthood, seven states and many family planning organizations nationwide have announced that they will be withdrawing from Title X so they don't have to compromise the comprehensive care they provide patients. The withdrawals leave a void for low-income patients, some of whom could turn to a network of crisis pregnancy centers that received Title X funds for the first time this year.

The Title X program is the only federal grant program that helps low-income people access family planning services. The use of any federal money to fund abortions was already barred, but the administration's new "gag rule," as reproductive justice advocates call it, also prevents any Title X grantee from providing abortions, referring patients for abortions, or discussing abortion as a family planning service option.

Planned Parenthood previously announced it would refuse Title X funds but not withdraw from the program, according to NPR. In a letter to the U.S. Court of Appeals for the 9th Circuit last week, the organization asked for a stay on the Trump administration's new rule.

But Diane Foley, deputy assistant secretary for population affairs at the U.S. Department of Health and Human Services (HHS), told Planned Parenthood last week that providers "must demonstrate good-faith efforts to comply with the final rule by August 19, 2019," according to The Hill. "Your proposal to remain in the Title X program without complying with the final rule, even in the absence of drawing down or using Title X grant funds, is inconsistent with that guidance," she wrote, according to Planned Parenthood. Prior to joining the Trump administration, Foley was the president and CEO of Life Network, which operates two anti-abortion crisis pregnancy centers in Colorado Springs, Colorado, according to Rewire.News.

Given that the court has not issued a stay, Planned Parenthood officially withdrew from the Title X program on Monday. Though Planned Parenthood CEO Alexis McGill Johnson wouldn't say during a press call Monday how much money the organization will lose, Business Insider reported that officials have officially said it will forego $60 million in federal funding.

Obria is a network of 30 anti-abortion clinics in five states. It received a $1.7 million Title X grant this year in California, with the possibility to renew for another two years for a total of $5.1 million.

The American College of Obstetricians and Gynecologists wrote in a 2017 fact sheet that abortion pill "reversal" procedures are not based in medical science and are "unethical."

McGill Johnson said on the press call that the clinics cannot provide the same level of care that Planned Parenthood does.

"Do you know what Obria does not provide? Contraception," she said. "That means patients who go to Obria seeking birth control will not be able to access methods like the pill, the IUD, and emergency contraception."

In California, those providers are more traditional health clinics Share Our Selves (SOS), located in Orange County, and Hurtt Family clinics, in Southern California, according to the Washington Post. The partnerships "allow Obria to fulfill a federal checklist of services," the Post reported; however, its Title X funding won't ever go toward providing hormonal birth control, and it's unclear if the organization will ever actually refer anyone for birth control given past statements from its CEO.

A May report from Rewire.News noted that Obria told HHS in one of its Title X applications that it would provide access to birth control. But Obria's founder and CEO, Kathleen Bravo, wrote to supporters in a January email that the clinics' "model is committed to never provide hormonal contraception nor abortions," according to a report by the Campaign for Accountability. "Obria promotes abstinence-based sexual risk avoidance education — the most effective public health model for promoting healthy behaviors," Bravo's email reportedly continued. Bustle has reached out to Obria for comment.

Additionally, the Guardian reported that Obria's application for federal funding referenced the Femm app, created and led by the Femm Foundation, whose board is against abortion access. The app allows users to “avoid or achieve” pregnancy by tracking menstruation and other details, while also doubting the efficacy of birth control. Obria reportedly wrote in its application for funding that the Femm Foundation's app and methods were central to its abstinence-only teachings, despite the fact that Title X grantees are supposed “to offer a broad range of acceptable and effective medically [FDA] approved contraceptive methods and related services," according to HHS. Bustle has reached out to HHS for comment.

A number of other anti-abortion clinics across the country receive state funding for family planning services that promote abstinence or "fertility-awareness" methods to prevent pregnancy.

What the new Trump rule will actually do, according to clinic workers and advocates who spoke to Bustle last month, is increase rates of unintended pregnancies and lead to people delaying their health care.

Amy Hagstrom Miller, founder and CEO of Whole Woman's Health, told Bustle in July that her clinics will be affected even though they aren't Title X grantees themselves. Many patients come to Whole Woman's Health centers for abortions "because they weren't able to access the care that they needed" elsewhere, Hagstrom Miller said, adding "40% of the people we see in Texas weren't able to get the contraceptives that they needed to prevent the pregnancy they came to us to help them take care of."

Planned Parenthood's Johnson said during the Monday press call that the ultimate effect of the Trump administration's new rule will be to block people from accessing care including birth control, cancer screenings, and STD testing at their nearby clinic, which may no longer be a Title X grantee.

"For too many people struggling to make ends meet, including those in rural areas and in communities of color, this gag rule may mean that they delay or go without care," she said.