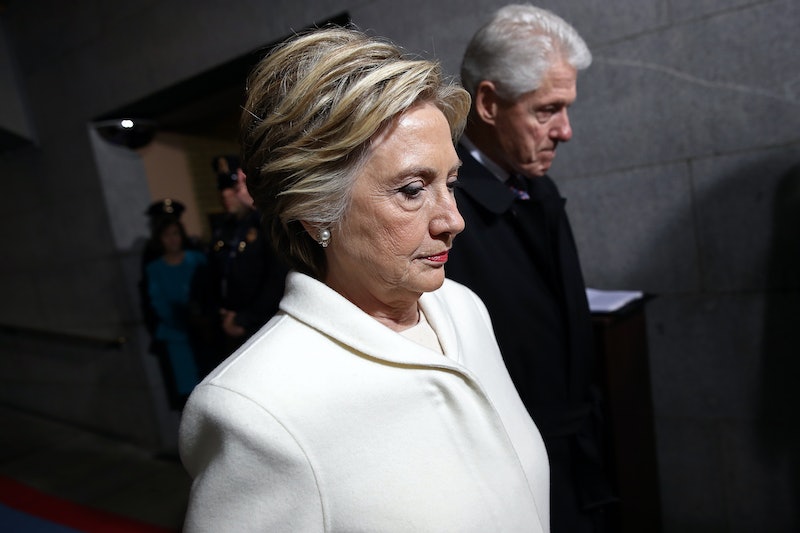 The Democratic Party — and most Americans who didn't want to see Donald Trump elected president — pinned their hopes on presidential candidate Hillary Clinton. But when she was defeated in the election by now-President Trump, Clinton seemed to retreat from politics, as well as from the eyes of the public. Amid the flurry of executive orders this week, she's remained silent. And people are asking: Where is Clinton when we need her most?

Look: America didn't elect Clinton. She won the popular vote, despite what Trump is claiming, but ultimately, the United States is responsible for the outcome of the election. Clinton doesn't have the responsibility to lead us and support us through Trump's extremely concerning executive actions, because she doesn't hold an elected office.

I'm reminded of the famous John F. Kennedy quote from his 1961 inaugural address: "Ask not what your country can do for you; ask what you can do for your country." Many of us may have seen Clinton as representative of the fight against threats to everything from our reproductive rights to environmental protection. But instead of asking what Clinton could do for the country, Americans should really be asking what they can do for each other.

In the months since the election, hundreds of thousands of Americans have shown that they are able to stand up for feminist values without the support or presence of Hillary Clinton. Members of traditionally marginalized groups have been out there protesting with allies, lobbying, advocating for causes, donating, and volunteering.

If you need an example of people showing solidarity, just look at how many people attended the Women's March on Washington and its various sister marches. More than 4.8 million people marched worldwide, according to the Women's March website. But when America's women take matters into their own hands, there are some things they must keep in mind. Like why it doesn't matter so much that Clinton, a white woman, wasn't present at the march. Being a privileged white woman, Clinton does not and can never represent us all — and we don't need her to.

In 2017, we don't have Clinton to lean on, but we still have work to do. While the success of the Women's March, with its revised principles of unity, is to be celebrated, it's also important to remember that not all public demonstrations are met with the same level of enthusiasm from others. Ijeoma Oluo, editor-at-large for The Establishment, wrote a powerful piece about this issue entitled "When You Brag That The Women's Marches Were Nonviolent."

Sure, it's great that barely anyone got arrested during the Women's Marches, but it's also important to consider the reason for that. At the end of the day, white people who marched went home and generally didn't have to worry about getting in trouble with the police. The same isn't the case for, say, Black Lives Matter protests.

Many intersectional feminists made this point — that the presence of white women at the Women's March resulted in decreased police violence. White women turned up in droves for the March, but they don't turn up at nearly that rate to BLM demonstrations. (And before anyone comes at me for singling out white women, let me just remind you that 53 percent of white women voted for Trump over Clinton, as FiveThirtyEight states.) Jenae Holloway's Glamour piece about why she didn't attend the march pointedly asks marchers the question, "See you at the next Black Lives Matter rally, right?"

Still, the March showed that women are ready to make a stand for their rights and hopefully for the rights of others, with or without Hillary Clinton. The Women's March originally included no people of color in its leadership, but after some backlash, its organizers added people of color to their leadership board.

This example of white women listening to their brown and black peers and making changes gives me hope. I wouldn't say the execution of the March was perfect by any means, but it showed that we can indeed look to ourselves to make change, even if initial efforts aren't perfect. We do not need to look towards Hillary Clinton to lead us; we can strive to lead and support one another.

So rather than asking where Clinton is, we need to ask ourselves where we want to be. Will we make sure to advocate for all marginalized people, both within our communities and from communities other than our own? I think we will.