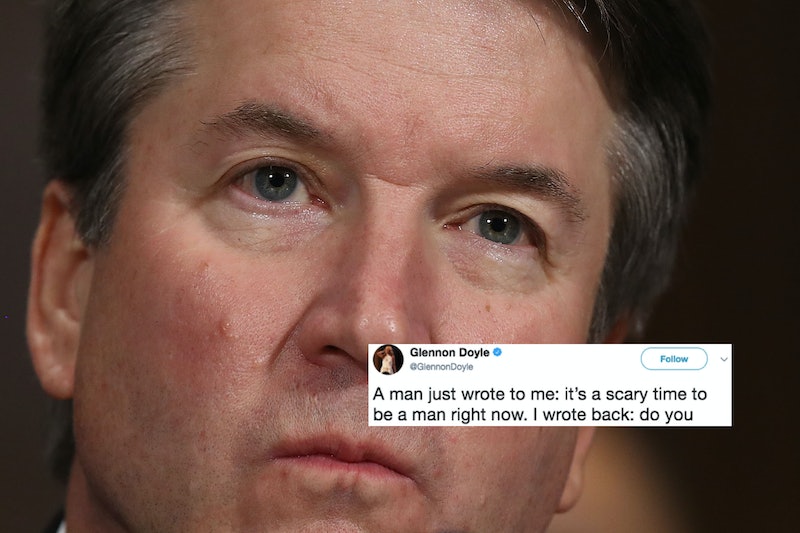 As sexual harassment allegations continue to be made public against powerful men, there has been a theme appearing among male commentators: discomfort. The argument being made — online and IRL — is that it's "hard to be a man right now," that men are being forced to reconsider every interaction they've had with co-workers, friends, ex-partners, and every other woman they know to see if how they acted could be construed as harassment or inappropriate. Some men are arguing that they now need to approach every interaction with a woman with trepidation; see the "Mike Pence rule" or the "The Rock test."

I myself have had several conversations like this with men over the past two weeks, both men who identify as feminist allies and ones who don't. And there's one aspect that seems to be pretty absent from their consideration: that if you're feeling vigilant and wary of the opposite sex, and are constantly monitoring your relationships with them in the workplace, on public transport, on the street — you're getting an insight into what women feel like. All the time. Every day. Yes, the stakes are wildly different — because as worried about their reputations as they may be, men don't have to worry about their physical safety around women, as women so often do with men — but it's a badly needed dose of reality.

The atmosphere is indeed a peculiar one. (Though if one more person calls it a "witch hunt" I will scream, because co-opting a historical occurrence that disproportionately, gruesomely punished single women with death as a metaphor for uncovering abuses by powerful men is not acceptable.) The air seems to vibrate with powerful (and abusive) men's fear as more allegations are brought into the public eye, and that's essentially unprecedented. And as new stories come out again and again, I fully encourage men to re-examine themselves and their past behavior. Just like not being racist in a deeply racist world takes work, not being sexist in an environment that normalizes sexist attitudes requires conscious commitment and awareness.

But what you don't get to do is complain about it — because, congratulations, you are now getting a free sample of how women have to act around men all the time.

In case the flood of experiences shared by the #metoo hashtag didn't make it clear, women encounter behavior that violates our sexual and personal boundaries constantly. From street harassment to people touching us to unwanted comments to physical violence, women are socialized to constantly be on our guard against these threats. And even if we aren't experiencing that right now, we're often, on some level, making plans to counter it if we do. Women in the modern world have trained, to the point of unconscious reflex, for encounters with potential male threat, discomfort, or annoyance. We carry our keys between our fingers on late nights. We wear headphones with the sound off to hear if we're being followed. We get into another train car if the closest one is full of drunk men. We monitor our smiles, arm positions, bodies and words: I don't want to give him the wrong idea. Please don't come near me. Please don't get offended. Please don't assume that my politeness means I'm flirting. Please regard me professionally. Please leave me alone.

Among men we don't know or trust (and even among the ones we do), we maintain a watchfulness, embedded in our everyday thoughts. And men who have never had to think about their maleness being a potential live wire in a room might now have a little bit more empathy for women who have to consider it every single day.

More like this
Beyoncé & Madonna’s “Break My Soul” Remix Honors A Group Of Black Icons
By Stephanie Topacio Long
Hinge's New NFAQ Feature Is Demystifying Queer Dating
By Emma Carey
The Best Time To Date After A Breakup, According To Experts
By Bustle Editors
12 Ways You're Sabotaging Your Love Life
By Teresa Newsome and Lexi Inks
Get Even More From Bustle — Sign Up For The Newsletter