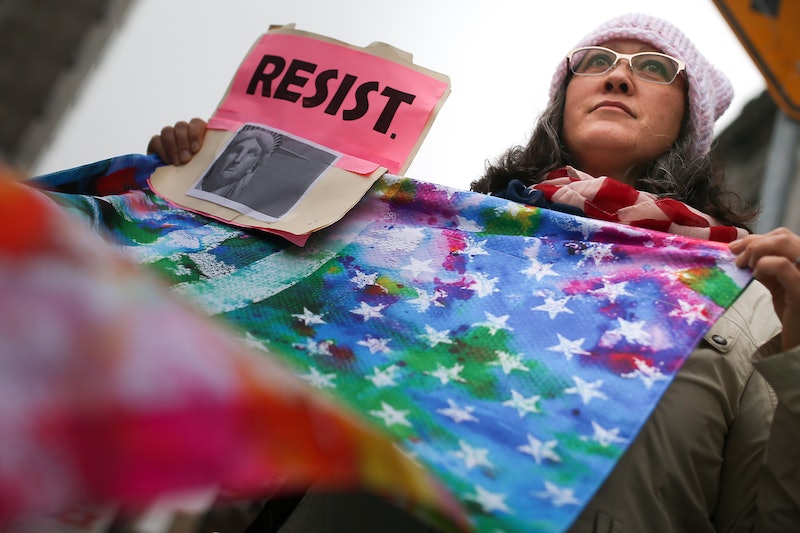 I was born and raised in a small town in East Texas, a deeply red area of a deeply red state. From a young age, I realized that my parents' liberal ideology was not the norm in this part of the country, and as I grew older and developed my own political beliefs, I experienced the feeling of a liberal woman surrounded by conservatives firsthand. It's a tough feeling of isolation, but not just from the people around you, but from progressive movements across the country.

I decamped from Huntsville, Texas to Austin—often referred to as the blue oasis in a sea of red—for college. I spent my post college career hopping around other liberal cities around the country, but returned to Austin two years ago for good. Despite its surroundings, it isn't hard to be a liberal in Texas' capital, nor was I faced with much derision in the small progressive city of Columbia, Missouri, where I attended graduate school. And my political views certainly didn't make waves when I moved to Washington, D.C., where Hillary Clinton captured a stunning 93 percent of the vote in the 2016 election. Things were easier. I felt safe.

My time outside of my hometown has made me acutely aware of the challenges that liberals, particularly liberal women, face when they live in conservative areas of the country. But I don't pity them. I respect the hell out of them.

I could write a "How to be a Liberal Woman in a Conservative State," but I won't do that. I can assure you that the target audience doesn't need that how-to. To be a liberal woman surrounded by conservatives means a near constant personal affront, particularly from mansplaining conservatives who think you just don't know any better. These liberals have heard time and time again — often with no one taking their side — why they are wrong, why this policy they believe in is evil, how they are the people who are ruining America. Imagine a team of Fox News talking heads dropping into all of your political conversations — that's the closest approximation I have. These women know that to make any impact whatsoever they have to be better informed and thicker-skinned than their liberal counterparts on the coasts and in big city enclaves. They fight with facts and they fight fearlessly.

But it isn't just the people in their immediate surroundings who are constantly looking for an explanation for their liberal political views — progressives are sometimes just as bad. Nothing infuriates me more than when a conservative state law is passed and the liberal internet begins its poo-poos. Inevitably, when a liberal person from that state pipes up, there is a coastal chorus of "Why don't you just move?" Or, even better, "Why would you live there?"

That is liberal elitism at its height. Despite the fact that many of these women don't have the means to move out of state — a process that I can personally attest can suck up thousands of dollars — it's insulting for people to believe that the only way to avoid these kinds of restrictions is to bail from the place where, either by choice or circumstance, established your home.

By virtue of where they live, then, many progressive women are completely edged out of wider movements. It might be because it's easier to organize in liberal pockets of the U.S., or, a darker, cynical take, maybe these movements won't reach out to the liberals in conservative strongholds because they believe that they aren't a useful part of a bigger mission.

If you have, in the past month, felt that a certain elected official in the White House doesn't represent your interests, all I have to say is welcome to the reality of being a liberal in a conservative state. The anger that has spurred many to civic action has been happening for years among progressives whose only representation in the White House are Republicans. Do you feel like a lost cause?

So to those liberal women surrounded by conservatives, I have this to say: You matter. Teach the people who suddenly feel lost in their own country how to channel that disillusionment into something bigger. Teach them about resistance, because you have been doing it for years.

And to the suddenly disrupted liberals who have long felt safe in their own silos — you'd do well to seek out and learn from the red state liberals, because they might be some of the hardest working progressives in the country.