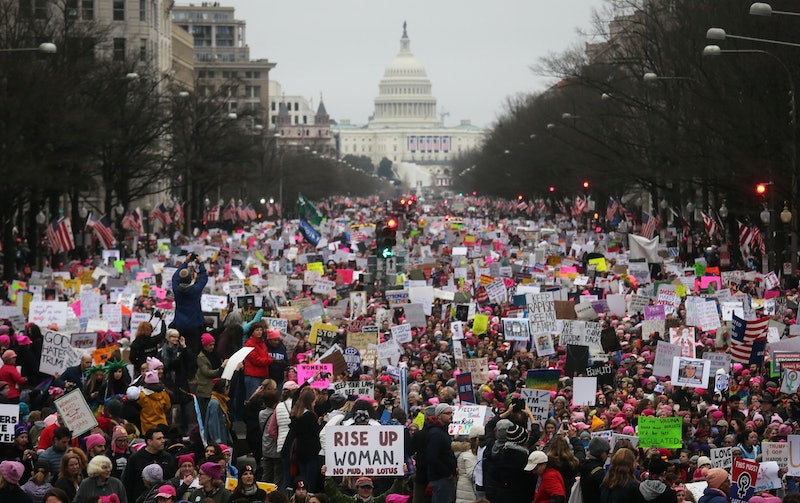 The story of the Women’s March is a story of legacy and learning. One reason to bear witness, to preserve its history — as I have in my interviews with 30 people central to its creation and through the voices of others who attended and observed all over the world — is that the lessons in this document can help us continue to show up to work for a better future.

I’m an experienced organizer, but I engaged with the Women’s March as both a participant and, frankly, a student. Over the weeks it was being planned, its social media and digital organizing, led by Alyssa Klein and Sophie Ellman-Golan, gave all of us a front-row seat to the step-by-step formation of a mass demonstration. Like millions of others, I watched, listened, and participated in spirited debates about inclusion, grieving the state of affairs and celebrating triumphs with the Women’s March community through Instagram, Facebook Live, and Twitter chats. The living archive expanded day and night, building excitement, creating intrigue, and teaching us that something as simple as showing up is as beautifully messy as any other human endeavor—especially in the decentralized, fluid model the march organizers chose to follow. I may not have agreed with every decision that was made, but I supported the women who were making them and their courageous attempts at working together across differences to figure things out at breakneck speed—with backlash almost always guaranteed.

Together We March by The Women's March Organizers and Condé Nast, $19, Amazon

Over the years, I’ve attended more marches than I can count, but I knew this one was different when I encountered droves of pink-hatted women standing in line at fast-food restaurants and rest areas on the ride down from New York City to Washington, D.C. As I listened to Trump’s swearing-in on the radio, my tension was eased by the sight of an endless stream of buses speeding by on the Beltway, decorated with signs calling for everything from labor rights to environmental justice.

"I knew this one was different when I encountered droves of pink-hatted women standing in line at fast-food restaurants and rest areas on the ride down from New York City to Washington, D.C."

On that unseasonably sunny Saturday morning in Washington, D.C., we came together under banners devoted to the protection and uplift of our communities and on behalf of voices that too often remain unheard.

While I marched, I learned that back in New York the bells at St. Thomas Church on Fifth Avenue played “We Shall Overcome” as marchers passed its doors. I imagined my mother back in the sixties, lifting her voice in song alongside Dr. Martin Luther King Jr., Bayard Rustin, Ella Baker, and other marchers, and I wondered if she had felt the same flood of emotions back then that I was feeling that day in Washington. As I marched, I imagined telling my future children, “I was there! Not just for me, but for you, and for your grandchildren too.” I knew I would be proud to say to them, “I was not silent. I was not complicit. We stood, together.” And when my eyes met the gaze of an elderly white woman who was wearing a vintage yellow Jackie O–style suit, sitting in a wheelchair and holding a “Black Lives Matter” sign, I was reminded of the importance of radical solidarity being passed down from generation to generation.

As I marched, I imagined telling my future children, "I was there! Not just for me, but for you, and for your grandchildren too."

The grim reality in our current world of the rise of authoritarianism and the emboldening of hate groups is chilling. Yet despite the terrain being the toughest that many of us have seen in our lifetime, we can look to our activist ancestors as a compass and a road map. And now we can also look to the march organizers, who, in the spirit of MLK before them, showed us that leadership is defined by being of service, seeking solutions, and working for the greater good. Together, the millions of souls who marched proved to the world that liberation comes not from a gilded tower, bombastic tweets, or a reality-TV empire, but instead from the energetic hope of true patriots (both documented and undocumented) who understand that we are all, as our sister marcher Gloria Steinem says, “linked, not ranked.”

On January 21, the revolution was televised, tweeted, and livestreamed, but flashed by in what felt like a second. Although the march was one of the biggest mass demonstrations in recorded history, each of us experienced our own limited corner of the bigger picture, and the sum is so much more inspiring, insightful, and instructive than the parts we saw in our own individual cities and on our feeds—which is why a deep, behind-the-scenes look is critical to our understanding of what really happened.

"....each of us experienced our own limited corner of the bigger picture, and the sum is so much more inspiring, insightful, and instructive than the parts we saw in our own individual cities and on our feeds...."

It is too soon to know the full impact of the movement and of the Women’s March organization, which is still forming its identity even as it continues to fight for equality, freedom of expression, and justice for all. This book, like the march itself, is only the beginning of a story. But we will feel the effects of millions of movement builders, artists, and former armchair revolutionaries who showed up and marched to resist oppression and defend human rights, and we will see the impact of the record-breaking number of women now running for office for years to come. We can find solace in the fact that women have proved time and time again, from the first interracial Anti-Slavery Convention of American Women in 1837 to the Women’s Convention held by Women’s March in Detroit in October 2017, that when people come together, share resources, and turn our daring discussions into opportunities to grow and change, there’s nothing we can’t do.