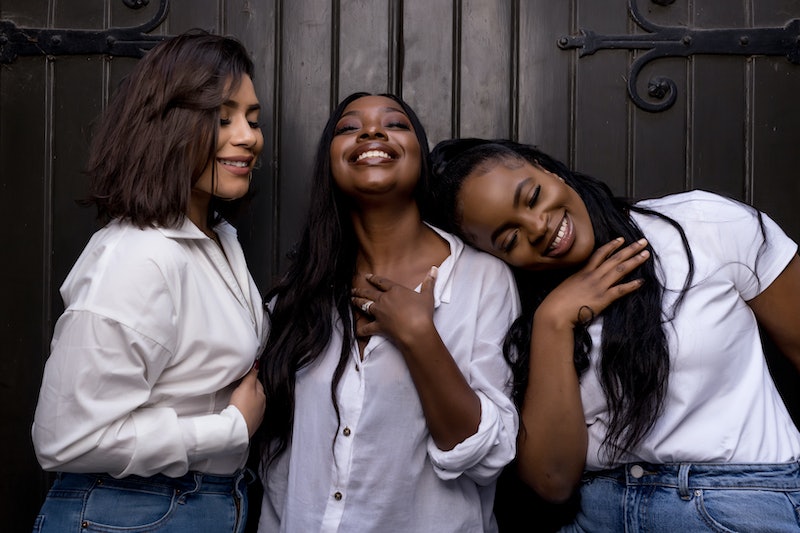 If you thought Tolani Shoneye doesn't hold back on her podcast, The Receipts Podcast, you should hear her in person. "Sometimes I just want to laugh and talk about dick," she tells me over the phone, and let's be frank, have truer words ever been spoken? When The Receipts Podcast first started it was like all our prayers had been answered. With everything from current affairs to chats about boys, I fell hook, line and sinker for this podcast from the moment I started listening to it.

Shoneye hosts the podcast together with friends Milena Sanchez and Audrey Akanda, and the trio are opinionated, unfiltered, and basically everything I want to be. The podcast has created space for women, especially women of colour, and thanks to their work, the sisterhood grows stronger. Following the podcast's move to Spotify, where it is now exclusively available to listen to, I spoke with Tolani Shoneye to find out how The Receipts Podcast came about, how she feels about the treatment of Meghan Markle, and the advice she'd give women hoping to break into media.

Lollie King: How did the podcast come about?

Tolani Shoneye: It was three years ago in September now, there was another podcast going called 3 Shots of Tequila and it was very laddy, and one of them tweeted that they didn't think a girl version of their show would work so I replied saying I know for a fact it would work, I've got the name I just need the girls. Loads of girls replied to the tweet and I dm'ed them, we made a WhatsApp group and it went from there. We didn't know each other at all but they've become my best friends. Sometimes I think "oh my god they'll be my bridesmaids."

LK: You guys have become friends for some many people, do you feel a responsibility to represent WoC?

TS: Initially it felt like a burden to represent so many people. I felt like I constantly needed to say the right thing. But then I realised that just being there and being in certain spaces in representation enough sometimes I think. When I think about the black women that I look up to, most of them are nothing like me, they're very smart, put together and not crude, but I still am inspired by them because they are in certain spaces and its amazing for them to be there.

LK: What are the biggest challenges you've encountered in the industry?

TS: I think for me it's not being taken seriously. So as a beauty journalist I used to feel that people wouldn't take my role seriously because people just think I'm talking about lipstick and lifestyle it's not deemed newsworthy. I find that with the podcast too, because we're a chatty podcast and we don't have this format, like a documentary style, I think sometimes it's seen as something that is not taken seriously. But as an audience member you don't want to listen to heavy stuff all the time. Life is hard and sometimes I just want to laugh and talk about dick and that's okay.

LK: If you could have one of your podcasts as required listening for all Britons, what would it be about?

TS: There is an episode we did about being a black woman in the workplace and I think that is such an interesting thing to talk about. At one point in your life you will encounter a black woman and there are certain things that people don't realise, like how many times will you have to ask people not to touch your hair. We talk about it and laugh about it but we had so many people write in with the same kind of experiences that it makes you think "wow, its 2019 and this is still happening".

LK: Do you have any thoughts on the way Meghan Markle is being vilified in the media?

TS: I have so much to say on this on this. I feel like it's so obvious, that the only reason people are being like this to her is because she is black. What I find even more crazy is that Meghan is white facing, so if she was really dark what would they've done to her? Britain is always really funny about racism, its always really undercover and it's not as overt, but we can see. From the headlines about how she's holding her baby, it's all ridiculous. Kate never got it nearly as bad as this. There's this need to paint her out as this sassy, angry person who isn't very nice, but there's no hiding what they're doing. I saw a headline and it was "Meghan's Favourite Snack Is Hurting The Environment" because she likes avocados, and the people who will believe these headlines are the ones who believe it already. Ultimately no one knows anything about her to not like her. There are so many contradictions to being a black woman, we are often silenced and not listened to, but told we're too loud.

LK: Is there anything you wish you knew when The Receipts Podcast first started?

TS: I think I wish I knew how powerful my voice is. There are certain things I would say because I felt like saying it, but then I'd realise "oh no that carries a lot of weight" and I didn't ever think my voice carried weight. So this is something that the podcast not only taught me but that I'm now most grateful for. I'm so thankful that the podcast made me see that my stories and experiences mean something. I had this idea of 'little old me', but this is something everything can have, everyone can realise their stories and experiences mean something. You're told to not say certain things, but talking about things, opened me up to so much more.

LK: What advice would you give to people trying to find their space?

TS: What worked for me was realising who I was and what space I wanted to take up. Sometimes we do things because everyone else is doing it or because we think it's cool. Once you believe in something then you can own that space or you can make you own. It's sounds cliche to say find out who you are, but it's so true. It's okay to change your mind, two years ago I would've been fixed on things that I'm not fixed on now.

LK: Do you have any advice for women in media?

TS: It's definitely a voice thing I think, that's what I've learnt my whole career, I've been in so many rooms where I have an idea and I don't say it because I don't think I'm important enough. There is nothing wrong in saying something. You don't have to be the loudest voice in the room but try and get your voice out there. I look back so many situations and regret not saying anything. So let your voice be heard.

You can listen to The Receipts Podcast exclusively on Spotify here.

More like this
Twitter Is Saying The Same Thing About Beyoncé's Renaissance World Tour
By Shahed Ezaydi
Charlotte Crosby’s Net Worth Shows How Far She’s Come Since 'Geordie Shore'
By Darshita Goyal
“I’m Not Here To Make Friends” Speaks To A New Sam Smith Era
By Maxine Harrison
How To Buy Tickets For Beyoncé’s UK Renaissance Tour Dates
By Shahed Ezaydi
Get The Very Best Of Bustle/UK
Sign up for Bustle UK's twice-weekly newsletter, featuring the latest must-watch TV, moving personal stories, and expert advice on the hottest viral buys.