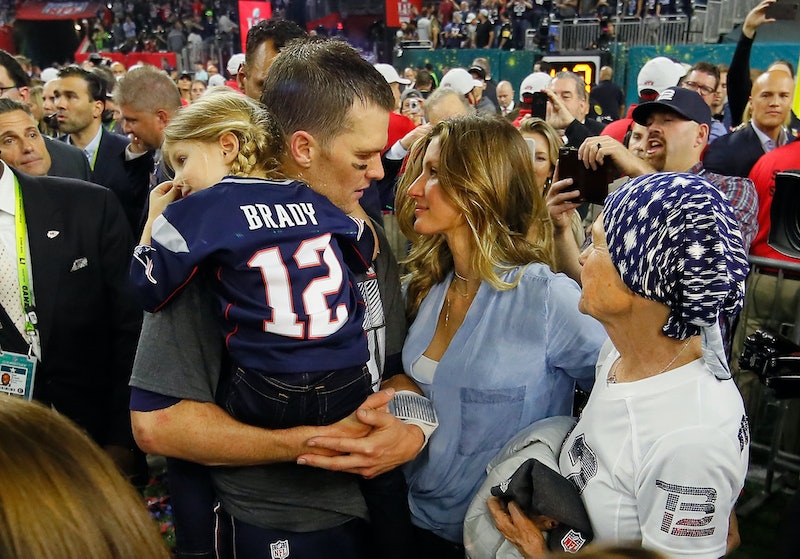 Brady and Bundchen have two children together, Benjamin Rein, born in 2009, and Vivian Lake, born in 2012, according to the Cheat Sheet. The Patriots quarterback also has a son, John "Jack" Edward Thomas, from a previous relationship with Bridget Moynihan. In an interview with People, Bundchen opened up about the couple's blended family. She told the publication, "I’m so grateful for [Bridget],” and continued, “I know this was hard, but I couldn’t imagine my life without [Jack]. I call him my bonus child.”

The model went on to say, "He opened my heart in ways I didn’t even know my heart could expand." And because of how much she loved being a stepmom to Jack, she wanted to "start a family" with her Brady, which they did shortly after exchanging vows in 2009, per People.

Brady and Bundchen have been pretty open about sharing updates about their family not only via interviews, but on social media, as well. And based on all of those photos and adorable anecdotes, it's clear that the blended Brady family is definitely a tight-knit group.

The quarterback celebrated Mother's Day by honoring his wife with a post featuring the whole family posing together during a Game Day, with all of Brady's kids donning his #12 jersey, of course.

Brady once again had his adorable cheering section behind him during another Game Day, as Bundchen's post showcases.

Taking A Page Out Of Dad's Playbook

Vivian may just be the family's next sports star, if Brady's cute clip featuring his daughter expertly throwing a football is any indication.

When the family isn't cheering Brady on during one of his games, they're taking some much-needed time for rest, relaxation, and a ton of fun.

Brady's daughter wore some truly amazing Game Day attire during the 2017 Super Bowl, as she donned a jersey that said, "Brady's Little Ladies."

In 2018, the athlete got to spend Father's Day surrounded by all of his loved ones. Bundchen posted a photo, which featured Brady getting some snuggles from his three children, and wrote, "Happy Father’s Day to the most loving dad in the world. We love you!"

Win or lose, Brady can always count on his family being there to support him during any of the Patriots' games. In one adorable photo featuring that cheering section, Vivian, Benjamin, and Jack posed together to cheer on their dad. The athlete wrote in his caption for the photo, "Now this makes my day!!! Go Pats! Great win boys! Let's go get another one! 😎💥💪🏼"