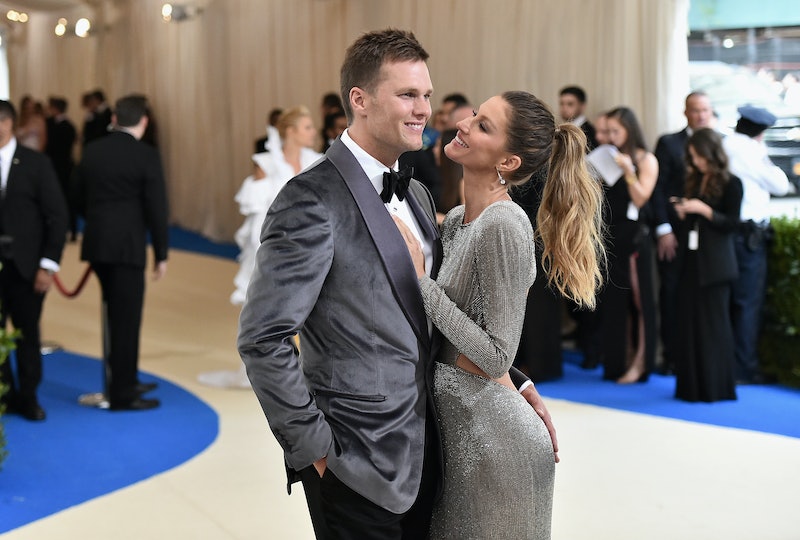 The Super Bowl might be a sporting event, but over the years it's also become a huge celebrity event. And, as with any celebrity event, the Super Bowl has its own first couple. The Grammys had JAY-Z and Beyoncé, the Super Bowl has Tom Brady and Gisele Bundchen. Brady, starting quarterback for the New England Patriots, and Bundchen, supermodel extraordinaire, have been together for over a decade. And, though the Brady and Bundchen relationship timeline shows that the couple has had their ups and downs, it would be foolish to think they're anything but the reigning couple of 2018's Super Bowl LII.

The 2018 Super Bowl will mark Brady's eighth time at the NFL championship, and Bundchen's fifth time cheering him on as a significant other. (Together, they've celebrated two wins.) The supermodel tends to keep a relatively low profile during the games, preferring to give Brady the spotlight, though she has been known to ask friends for their thoughts and prayers before the big game. Back in 2012, The New York Post published a leaked e-mail Bundchen sent family and friends asking for prayers for Brady. "I kindly ask all of you to join me on this positive chain and pray for him, so he can feel confident, healthy and strong," she wrote at the time. Though the e-mail was ridiculed in the press at the time, it certainly proves that Bundchen is nothing if not supportive. And, looking at the Brady-Bundchen relationship, it's really not that surprising at all.