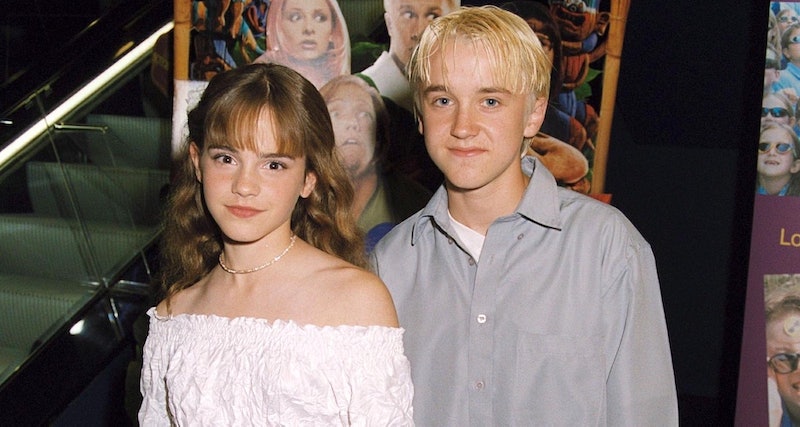 Harry Potter & The Deathly Hallows Part Two may have been released eight years ago but my heart still leaps with joy whenever any of the cast members are seen together. The adventures at Hogwarts massively shaped my childhood, like so many other people, so to know that the cast are friends to this day seriously warms my heart. If you feel the same, then learning that Tom Felton is on holiday with Emma Watson and has posted a picture of him at the beach with a t-shirt saying "Women Do It Better" will hit your right in the feminist feels. Since leaving the franchise, Watson has become a feminist icon so it’s no surprise that the pals she surrounds herself with support the cause. While Felton and Watson may have been sworn enemies in the magical world of Harry Potter, it’s clear they’re incredibly close IRL. And I'm living for it.

Harry Potter fans everywhere died a little bit this week when photos emerged on Tom Felton’s Instagram of him and Emma Watson on holiday in South Africa. Felton first posted a picture of the magical duo in their pyjamas as he was teaching Watson to play guitar with the caption “quick learner x”. If that wasn’t enough, on Aug. 19, Felton posted another picture of him sitting on the beach, looking super chilled, with a t-shirt on that reads “Women Do It Better” and the credit EW (surely Emma Watson.) For feminist Harry Potter stans everywhere, it might have been a little bit too much.

One of Felton’s followers commented on the picture saying, “Is this all real? Or is this just happening inside my head?” Another said, “emma took the photo they’re chilling together IM SCREAMING.” And one seriously excited fan wrote, "me after seeing all these adorable pictures : *in Draco's voice* 'It's killed me, it's killed me.'" The Watson/Felton fan base are not here to play.

It’s understandable that fans of Harry Potter, Watson, and Felton are going a little wild that the actors are hanging out and are on holiday together. It might be nearly a decade since the last film was released but I know I love it more than ever. In an interview with the Radio Times in 2018, Felton said, “I saw Daniel (Radcliffe) a few weeks ago in New York. I just see them when I can. I think Jessie Cave, who played Lavender Brown, is performing in London so I might go and see her show. Matt Lewis (Neville Longbottom) and Bonnie (Ginny Weasley), they live out in America right now, so I hang out with them quite a bit.” He added, “we love a Potter reunion” and fans definitely do too.

In Feb. 2019 Watson posted a picture of herself with the caption “friends capture you best” and tagged Felton as the photographer, proving that, despite the fact that they’ve grown up and are super busy, Watson and Felton are obviously incredibly close. It’s so nice to think that, while they made so many people's childhoods magical, they also got some great mates out of the Harry Potter franchise too. However, I think it's a fair warning that anymore cute and feminist friendship posts on Instagram from these two may lead to Potterheads around the world no longer being able to control their excitement.