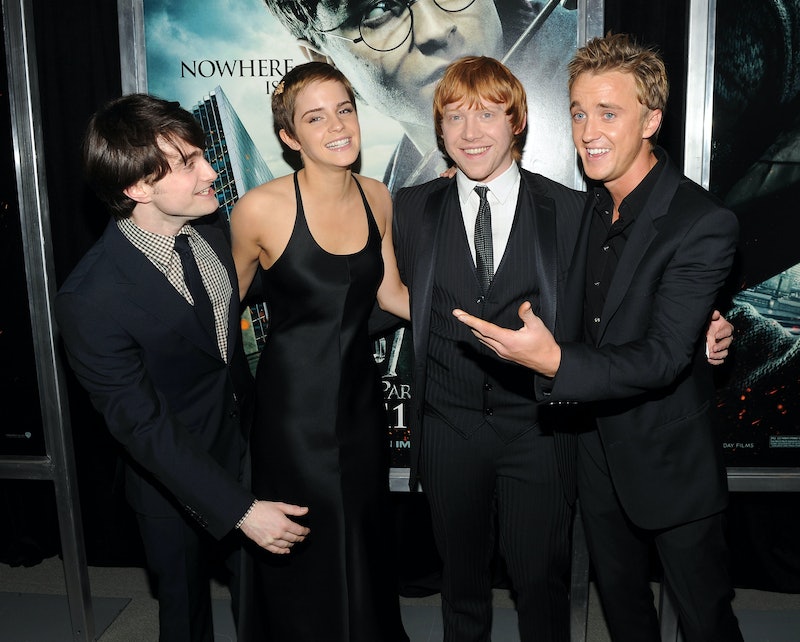 It's a mini Harry Potter reunion. On Monday, Aug. 19, Tom Felton posted a photo teaching Emma Watson guitar, sharing a moment from what looked like an impromptu lesson on Instagram. Watson is sitting on the couch and holding a guitar, while Felton looks on and gives her some pointers. Both stars are wearing pajamas, and the photo is tagged in South Africa. Watson and Felton's Harry Potter characters, Hermione Granger and Draco Malfoy, were nemeses, but these two actors are longtime BFFs off-screen.

Felton posted the photo of Watson on Instagram with the caption, "Quick learner x." In recent years, Felton has pursued music in addition to acting, and he often posts his songs and performances on social media. In early August, the Origin star posted a video performing at LeakyCon on Instagram. Back in July, Felton shared an original song with fans on his account as well. It seems that the actor and musician took advantage of the time spent with Watson abroad to teach her a new instrument. It's not clear if the two former costars were doing work in South Africa or simply on a vacation, but the photo shows for certain that these stars remain close pals.

The guitar lesson was not the first time the former Harry Potter stars have reunited in recent years. In November 2018, Watson shared a video skateboarding with Felton in Los Angeles on Instagram. In the clip, they shared a skateboard, while Felton attempted to teach Watson how to ride. "Easy with the wobbling," he joked. "Keep your feet still. You're dancing around on the board like a clown, hang on tight!"

Watson also shared a picture of the two sitting on the beach, and a supportive message for her friend in the caption. She wrote:

After their hangout in Los Angeles in November 2018, Felton said he caught up with Watson often in an interview with Us Weekly. "Lovely Emma. We do see each other quite a lot actually. We just don’t always post pictures about it," he said. "Everyone loves the reunion of it. We’re reuniting all the time we just don’t always post it on Instagram."

In February, Watson posted another photo taken by Felton on Instagram, captioning the picture, "Friends capture you best @T22felton" with a butterfly and camera emoji.

Harry Potter and the Sorcerers Stone premiered in 2001, while the final film in the series, Harry Potter and the Deathly Hallows Pt. 2, was released in 2011. After working on set for more than a decade, it's no wonder that many of the cast members are still close, even as their careers have taken them in different directions.

Watson and Felton have both remained busy in recent years. In December, Watson will appear in Little Women, alongside Saoirse Ronan, Meryl Streep, and Timothée Chalamet. In January of 2018, Felton appeared in Ophelia with Daisy Ridley, and had a starring role in the YouTube Premium series Origin.

No matter where life after Harry Potter takes them, Watson and Felton are clearly keeping in touch. Felton's new post is the latest reminder that he is not a Draco Malfoy off-screen, and he and Hermione seem to be getting along just fine.