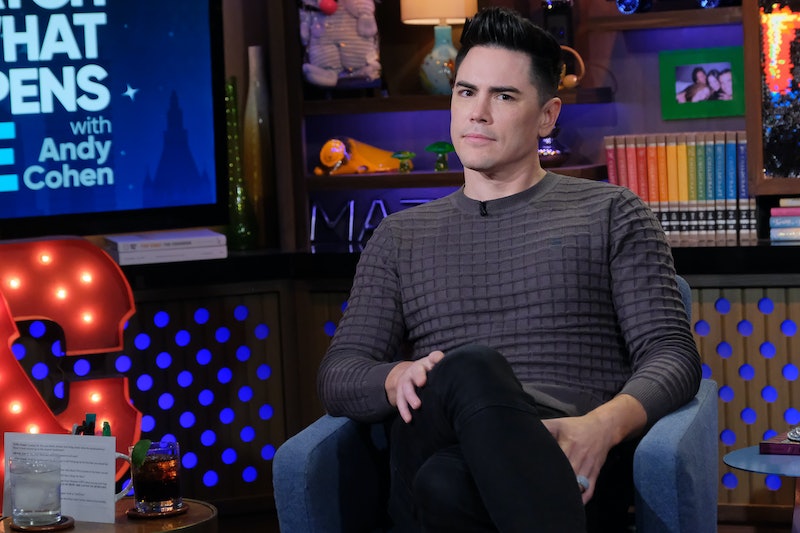 Vanderpump Rules fans have been left in suspense about why Tom Sandoval was arrested since the show's Season 8 trailer, in which the (partial) TomTom owner was shown being led to a police car in handcuffs as Ariana, Katie, and the rest of the gang watched in shock. Weeks later, the March 31 episode has finally solved the mystery: it was just an elaborate prank...pulled off by an unexpected party.

It all started when Sandoval and his TomTom minion Max TP'ed Jax's house for his 40th birthday. Sandoval managed to successfully deflect the blame before admitting to the deed later that night — by giving Jax toilet paper (hopefully Jax saved some, considering we're now in a global pandemic with toilet paper shortages).

From there, Jax vowed to get revenge. And he did...thanks to Lala's fiancé Randall, who has apparently pulled a huge prank on every movie he's ever worked on. As his birthday gift to Jax, Randall hired actors to fake-arrest Tom on charges of vandalism. It worked. He and everyone else (sans Jax and Lala) were totally freaked out. After Randall broke the truth, they all laughed it off — except for Katie, who felt the prank was offensive.

In Katie's defense (a true rarity), the idea of being arrested — or seeing a loved one get arrested — holds an emotional charge for a lot of people, and particularly for people of color, who have been historically discriminated against within the criminal justice system. As a white, privileged reality star, Sandoval didn't flinch...though as he admitted, it's also not the first time he's ended up in the back of a cop car. And given this group's history, it's likely not to be his last.

Was it the most tasteful prank? Certainly not. But this is Vanderpump Rules. What more would you expect?

More like this
‘RHOSLC’ Star Jen Shah’s Arrest & Legal Drama, Explained
By Brad Witter and Jake Viswanath
Kathy Hilton’s 'RHOBH' Controversy Wasn’t Entirely Caught On Camera
By Jake Viswanath
What Happened With Justin & Salley Pre-'BiP'? They Fueled Rumors At Stagecoach
By Grace Wehniainen
Here’s What Went Down Between Romeo, Jill, & Kira Before 'Bachelor In Paradise'
By Grace Wehniainen
Get Even More From Bustle — Sign Up For The Newsletter