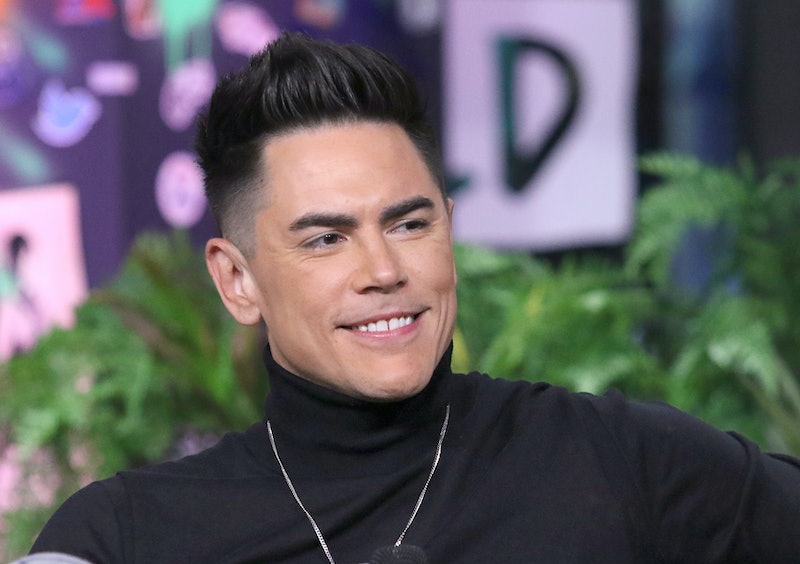 Fans who are turning into the Vanderpump Rules Season 8 premiere are getting their first dose of workplace drama and relationship woes from the SUR employees, past and present, on Tuesday night. But fans previously received a potentially shocking piece of information. Tom Sandoval apparently gets arrested on Vanderpump Rules Season 8, as teased in an early promo.

In the very brief clip, released in November, Tom is shown being escorted into a police car in handcuffs, with sirens blaring everywhere and those flashing red light alarms coming into focus on camera. A male voice, which somehow sounds like both Tom Schwartz and Jax Taylor at once, repeats Tom's name out loud, while his longtime girlfriend Ariana Madix is seen walking down the street, stressfully asking "What is this?" Bustle has reached out to a representative of Tom for comment, but did not recieve an immediate response.

So as Ariana wondered, what is this, exactly? Frankly, it's tough to find out. There's no record online of Tom getting arrested in 2019, when Season 8 was filmed. In fact, the only news stories that pop up on Google are articles about the footage of his arrest shown in an early teaser for the season. Since there's no public record to be found, it's very likely that this was a huge misunderstanding, or maybe even a cruel elaborate prank (which the cast is not above pulling). But to find out for sure, it looks like fans have no choice but to tune in this season.

If Tom was indeed arrested, it wouldn't be the first time. Documents uncovered by Radar Online reportedly show that he was arrested in 2008 for driving with a suspended license. When he was a no-show in court, a bench warrant was issued. However, Tom paid off his fine in the coming months, and the case was moot, so it's not likely that this incident has to do with the possible arrest fans saw onscreen.

Whether Tom actually got arrested or not, it's just one of the many dramatic incidents and potentially terrifying moments to come this season on Vanderpump Rules. Between Jax finally getting married to Brittany Cartwright, Stassi Schroeder's engagement to Beau Clark, and the new employees at SUR, who arrive with baggage of their own, Tom's arrest might actually just be a small blip on screen. These kids can never just chill, can they?