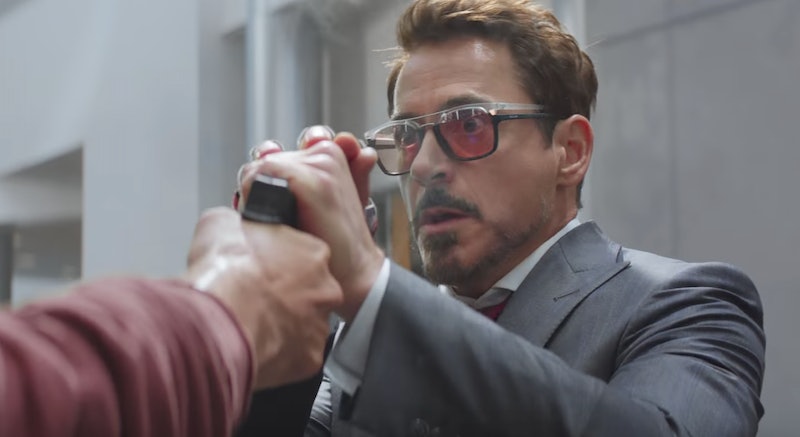 "I gotta get her back in these movies so I can make out with her onscreen again." That is what Robert Downey Jr. (Tony Stark) said on The Howard Stern Show, via People, last year about Gwyneth Paltrow. Paltrow, of course, plays Pepper Potts in the Marvel Cinematic Universe (MCU), but was noticeably absent form Captain America: Civil War. Well, it did not take long for Downey to follow through on his word — spoilers ahead. After a short breakup, Tony and Pepper are back together in Spider-Man: Homecoming, which means Downey and Paltrow could be hanging out on screens everywhere for the foreseeable future.

In Civil War, Tony told Cap that he and Pepper were on a "break" because she felt he was too obsessed with his work as Iron Man. He hoped that signing the Sokovia Accords would be a good compromise and help keep him in line for her. It's unclear whether or not Pepper is actually in favor of the Accords, though given the final act of Civil War, it would be surprising if Tony himself were still totally on board. Maybe fighting with Cap made Tony realize that his relationship with the Avengers was always going to be at the mercy of big bads and twisting loyalty. Or perhaps he just groveled until Pepper sighed, rolled her eyes, and took him back. (My money's on the later.)

Pepper and Tony's relationship status isn't confirmed until the end of Homecoming, when Pepper appears at the Avengers compound with Tony, and he jokes about possibly proposing to her in front of a gaggle of press. (Whether or not that proposal actually happened remains to be seen.) It's a short scene, but it 100 percent confirms what all fans have hoped for: Pepper and Tony are back together — for good this time. But, aside from giving one of MCU's iconic couples a happy ending, Pepper's cameo in Homecoming might also help explain why Tony wants to be more hands-off when it comes to actually training Spider-Man. In Homecoming, Tony delegated and made Happy Peter's point person at Stark Industries, which meant he wasn't really there to show Spidey the ropes. Could Tony finally be prioritizing Pepper over superhero duties?

Whatever he's doing, let's hope he keeps it up. I don't think Tony can face another Avengers-scale battle without Pepper by his side, and Avengers: Infinity War is right around the corner.