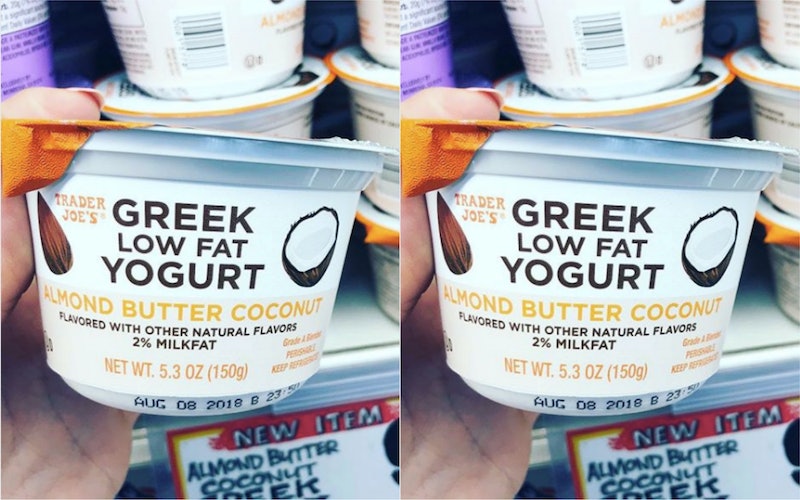 It's simple, delicious, and probably one of the first foods you ever tried: yogurt. What is arguably the most underrated dairy product, yogurt is the rare food that can be eaten by itself, or used as an ingredient in recipes for every meal. In place of milk with cereal? Of course. As part of a power smoothie for lunch? You bet. As a creaming agent in pasta sauces for dinner? Perfection. But since it's hard to improve on the classic, why not spice (or sweeten it up a bit?) Check out Trader Joe's Almond Butter Coconut Greek Yogurt.

Instagram user TraderJoesAnonymous spotted and snapped a photo of the single-serving cup at the store's Costa Mesa, California location. Posted on July 4, they captioned the photo saying "Almond Butter w/ Coconut! Summer essential 💯🇺🇸👌🏼" accompanied by an array of hashtags. User Coconutsfornyc left the first comment, which reads: "Currently the best item on the shelves!" Another user inquired about whether it does in fact taste like almond butter, to which another user responded, "I found it to taste way more like coconut could barely spot the almond butter taste." An editor at Bustle who tried it commented that it was "very satisfying" and paired well with a peanut butter granola.

Taste is subjective, though, so if you're hoping for something coconut-ty and almond-nutty, you're going to want to try it for yourself. Nuts not your thing? Fear not: TJ has tons of other different yogurts you can snag. Here are some others that will turn your head in the dairy aisle.