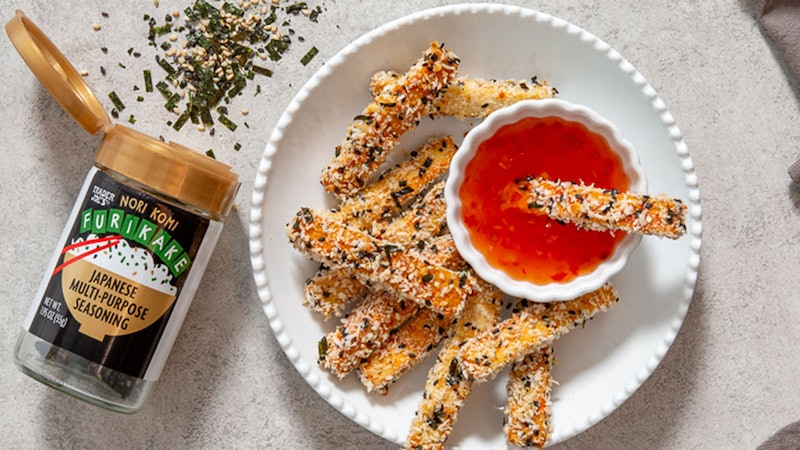 You may be more familiar with Furikake seasoning than you realize. It’s a poké bar staple used as a seasoning for fish and other protein. As Trader Joe’s describes in a blog post, Furikake seasoning is also added to rice dishes and udon noodle dishes. Basically, it’s a quick and easy way to add distinct flavor to your next dinner.

What exactly is Trader Joe’s Nori Komi Furikake made of? Pretty much what you’d expect if you’ve ever had a poké bowl. The seasoning is a blend of strips of dried nori seaweed, black sesame seeds, white sesame seeds, salt, and kelp powder. So, it’s savory, earthy, and ocean-based flavor make it ideal for seafood dishes. In addition to fish, Trader Joe’s recommends adding it to eggs, ramen, and even popcorn. You could try mixing it with some cream cheese as a dip for Trader Joe’s Tamari rice crackers. Sprinkle it atop your edamame as your next appetizer. Trader Joe’s also has a recipe for Sriracha Furikake Tofu Fries on their blog that you’re most likely going to crave the second you look at the picture.

In February 2019, Trader Joe’s added Multipurpose Umami Seasoning to the spice aisle. The mix of earthy porcini and white button mushrooms with salt, onion, mustard seed, red & black pepper, and thyme makes for a savory addition to any dish. Whether you want to give your veggie dishes a meaty heartiness (without actually adding any meat) or make your homemade french fries even more delicious, Trader Joe’s umami seasoning is a cure-all spice.

Time will tell whether Trader Joe’s new Nori Komi Furikake Japanese Seasoning will fare as well as its seasoning brethren. However, if it’s versatility, affordability, and deliciousness are any indication, it’s sure to become your new favorite Trader Joe’s find.