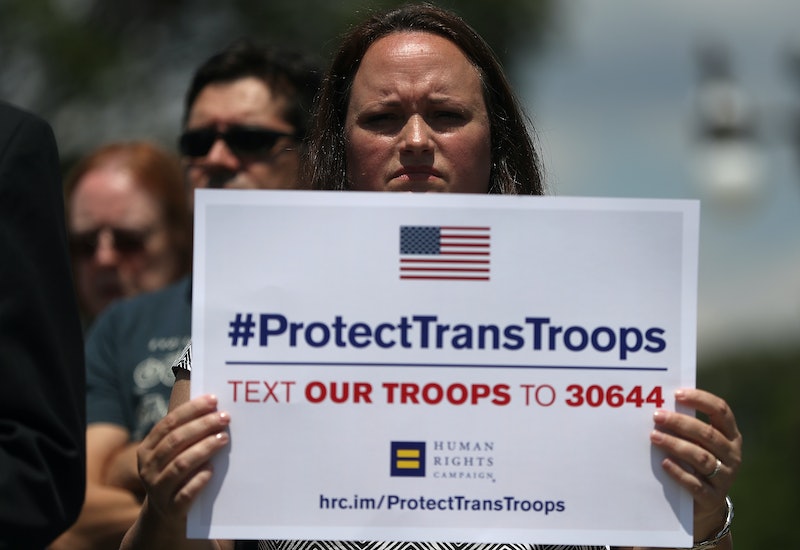 The symbolism of the yearly State of the Union address extends far past what the president decides to emphasize with his words. Each congressperson present gets to bring a guest, and these invitations are also often highly symbolic. In a perfect example of that, several congresspeople will bring transgender service members to the State of the Union as their guests, forcing President Donald Trump to speak directly to the members of the armed forces who he's attempted to ban from serving.

In one example, New York senator and declared Democratic presidential candidate Kirsten Gillibrand will bring a transgender Navy Lieutenant Commander to the State of the Union as her guest, according to the Huffington Post.

"Patriots like Lt. Commander Blake Dremann—the first openly transgender servicemember to be promoted in our military's history, and the president of @sparta_pride—make our armed forces and our country stronger," Gillibrand tweeted on Monday, announcing her guest. "I’m honored he’ll be joining me at the State of the Union."

"Last April, I asked Sec Mattis whether he would thought courageous trans servicemembers like AF Staff Sgt Ireland are a "burden" on our military," Speier tweeted, on her decision to invite Air Force Staff Sgt. Logan Ireland to the State of the Union address. "This year I'm proud to have Staff Sgt Ireland as my guest of honor at the #SOTU. He’s proof that our #trans troops make us stronger!"

According to Think Progress, Ireland served in Afghanistan and was one of the people who consulted with the Pentagon when President Barack Obama repealed the previous ban on transgender people serving in the military.

McEachin invited Navy Petty Officer 2nd Class Megan Winters to the State of the Union, according to Military.com. Winters is from McEachin's district, and she was a plaintiff in a case challenging the ban.

"As many as 15,000 transgender individuals currently serve in the U.S. military, and they deserve our utmost respect and gratitude," McEachin said in a statement, according to Military.com. "Unlike our current commander in chief, I will always support and defend the brave members of our military."

Pappas became New Hampshire's first openly gay congressperson after he was elected in 2018, according to WBUR, and he announced on Twitter that he had invited transgender Navy veteran Tavion Dignard to join him at the State of the Union.

"My guest for the #SOTU will be Tavion Dignard, a transgender Navy veteran. The Trump Admin’s transgender service ban makes America less safe and politicizes our military," Pappas tweeted on Sunday. "Everyone who is fit to serve should be treated equally. I’m proud to welcome to [sic] Tavion to the People’s House."

Democrats have expressed their disagreement with Trump's policy of banning transgender troops in numerous ways, as Vox wrote. By bringing transgender service members to watch Trump give his speech, though, they're making the statement personal.