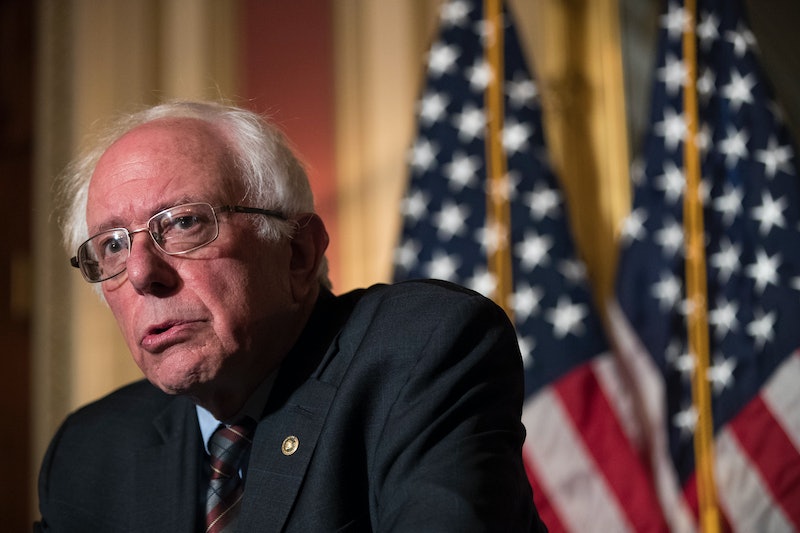 Onetime presidential candidate Sen. Bernie Sanders gave a rousing and highly political speech to a group of college graduates on Tuesday. The transcript of Bernie Sanders' Brooklyn College address touches on inequality and the current Republican leadership, and he used his own past as an example of why American belongs “to all of us.”

Calling the current American political system an "oligarchy," Sanders said, "The truth is that the only rational choice we have, the only real response we can make is to stand up and fight back, reclaim American democracy and create a government that works for all of us, not just the 1 percent. And for us to do that it is necessary that we fight for a vision of a new America. An America based on progressive, humane values, not the values of the oligarchy."

Sanders, who could run again in 2020, lost the 2016 Democratic primary to former Secretary of State Hillary Clinton. The speech sounded much like his campaign rallies, though there were fewer chants of "Bernie." But the Vermont senator did garner applause at times, especially when he mentioned taking on the student debt crisis.

Sanders also referenced his Brooklyn roots throughout the speech. Sanders, who spent a year studying at Brooklyn College before transferring to the University of Chicago, noted how financial hardship created "tension" among his family members. "My mom, dad and older brother, who graduated from Brooklyn College, lived in a three-and-a-half-room rent-controlled apartment," the Vermont senator recalled. "As with many of your families who don't have a lot of money, financial pressure caused friction and tension within our household."

Read the full transcript below.

You know and I know that these are tough times for our country. But I do want to say that standing up here and looking out at the beautiful people in front of me, I have enormous confidence in the future of our country. Let me begin by congratulating the graduating class of 2017. Today is an important lives in your lives, something that I know you have worked very hard to achieve. And I want to wish all of you the very best of luck in your future endeavors. May I not be strangled. [Takes off doctoral sash.] See, not only do I think you have a right to read on the grass, I think speakers have the right not to have that stuff around their throats. But I do want, on behalf of my wife Jan and myself, to see and pray that you all live happy and healthy lives, doing the work that you enjoy, surrounded in love by family and friends. And let me thank president Michelle Anderson, Nicole Haas, the Brooklyn College administration, faculty and staff, and all of you for inviting Jane and me back to Brooklyn, where we were both born and raised. And I am very honored by the honorary degree you have given me.

I grew up in Flatbush, and like Senator Schumer, graduated from James Madison High School. My wife Jane was also raised in Flatbush and Bedford-Stuyvesant and graduated from Saint Xavier's high school, a few miles away from here. In 1959, as a first-generation college student, I attended Brooklyn College for a year, a year that had a major impact on my life. After that year I left for the University of Chicago, where I eventually graduated. My mom had died the previous year and I felt it was time to leave the neighborhood, and see what the rest of the world looked like.

My childhood in Brooklyn was shaped by two profound realities. First, my mom, dad and older brother, who graduated from Brooklyn College, lived in a three-and-a-half-room rent-controlled apartment. As with many of your families who don't have a lot of money, financial pressure caused friction and tension within our household. From those experiences of growing up without a lot of money, I have never forgotten that there are millions of people throughout this country who struggle to put food on the table, pay the electric bill, try to save for their kids' education or for their retirement. People who against great odds are fighting today to live in dignity.

The second reality that impacted my life was that my father left Poland at the age of 17, from a community that was not only very poor, but from a country where anti-Semitism, pogroms, and attacks on Jews were not uncommon. While my father immigrated to the United States and escaped Hitler and the Holocaust, many in his family did not. For them, racism, right-wing extremism and ultra-nationalism were not political issues. They were issues of life and death. And some of them died horrific deaths. From that experience, what was indelibly stamped on my mind was the understanding that we must never allow demagogues to divide us up by race, by religion, by national origin, by gender, or sexual orientation. Black and whites, Latino, Asian-American, Native American, Christian, Jew, Muslim and every religion. Straight or gay. Male or female. We must stand together. This country belongs to all of us.

As the United States senator from Vermont, let me give you a very brief overview of the current crises we face. Crises which do not often get the attention they deserve. Just are not talked about. As a student at James Madison High School many years ago, I recall my social studies teacher talking about how there were small developing countries around the world that were oligarchic societies. Places where the economic and political life nation were controlled by a handful of very wealthy people. It never occurred to me as a kid in Brooklyn that the United States of America, our great nation, could move in that direction, but that is precisely in my view what is happening today.

Today in America, the top tenth of the 1 percent owns almost as wealth as the bottom 90 percent. Twenty Americans now own as much as the bottom half of America. And one family now owns as much wealth as the bottom 42 percent of our people. In the last 17 years, while the middle class continues to decline, we have seen a tenfold increase in the number of billionaires. Today in America are earning almost 300 times what the average worker makes. And in terms of income, while you and your parents are working in some cases two or three jobs, 52 percent of all new income generated today goes to the top 1 percent.

Meanwhile, at the same time as we have more income and wealth inequality than any other nation. Forty-three million Americans live in poverty. Half of older workers have nothing in the bank as they approach retirement. And in some inner cities and rural communities, youth unemployment is 20, 30, 40 percent. Unbelievably in our country today as a result of hopelessness and despair, we are seeing a decline in life expectancy. People are giving up and they're turning to drugs and alcohol. And even to suicide. And because of poverty and racism, today in a broken criminal justice system, we have more people in jail than any other country on earth. And those people are disproportionately black, Latino and Native American.

Directly related to the oligarchic community we currently have is a corrupt political system which is undermining American democracy. And it's important we talk about and understand that. As a result of the disastrous Citizens United Supreme Court decision, corporations and billionaires are able to spend unlimited sums of money on elections and the result is today that a handful, a small number of billionaires are spending hundreds of millions of dollars every single year, often on ugly 30-second ads, helping to elect candidates who represent the wealthy and the powerful.

We are seeing how the results of how oligarchy functions right now, right now in Congress, where the Republican leadership wants to throw 23 million off of medical insurance, cut Medicaid by $800 billion, defund Planned Parenthood, cut food stamps and other nutrition programs by over $200 billion, cut Headstart and after-school programs. And by the way, make drastic in Pell grants and other programs that help working-class kids be able to go to college. And unbelievably, at exactly the same time as they are throwing people off of healthcare, making it harder for kids to go to college, they have the chutzpah to provide $300 billion in tax breaks to the top 1 percent. In other words, the very very rich are getting richer and they get tax breaks. The working class and middle class are struggling and they are seeing drastic cuts in life and death programs that could mean survival or not survival for those families.

Now in response to these very serious crises it seems to me we have two choices. First, we can throw up our hands in despair. We can say the system is rigged, I am not going to get involved. That is understandable, but it is wrong. Because the issues that we deal with today — the economic issues, the social issues, the racial issues, the environmental issues, not only impact your lives they impact the lives of future generations. And you do not have the moral right to turn your back on saving this planet and saving this future generations.

The truth is is that the only rational choice we have, the only real response we can make is to stand up and fight back, reclaim American democracy and create a government that works for all of us, not just the 1 percent. And for us to do that it is necessary that we fight for a vision of a new America. An America based on progressive, humane values, not the values of the oligarchy.

And what does that mean? Briefly, in concrete terms: It means that no we aren't going to throw 23 million Americans off the healthcare they have. We are going to bring about healthcare for all as a right not a privilege. It means that no we are not, as the current administration does, the reality of climate change. No we are going to take on the fossil fuel industry, transform our energy system from fossil fuel to energy efficiency and sustainable energy. It means no we're not going to cut Pell grants and other student assistance. We are going to do what Germany, what Scandinavia, what countries all over the world do. And that is: to make certain that public colleges are tuition free. And we're going to significantly lower student debt because we believe that anyone in America who has the ability and the desire should be able to a get a higher education regardless of his or her income. And no we're not going to do what the attorney general of the United States now wants. We're not going to put more people in jail. We're going to fix a broken criminal justice system and invest in more jobs and education for our young people, not more jails and incarceration. No, we're not going to defund Planned Parenthood. We're going to vigorously defend a woman's right to choose.

My friends, let me conclude by saying this: We live in the wealthiest country in the history of the world. We are seeing an exploding technology which if used well has extraordinary potential to improve life. We are an intelligent and hardworking people. If we are prepared to stand together. If we take on greed and selfishness. If we refuse to allow demagogues to divide us up. There is no end to what the great people of our nation can accomplish.

So today, as you graduate from Brooklyn College, my message to you is very simple: think big not small and help us create the nation we all know we can become.

Thank you all very much.