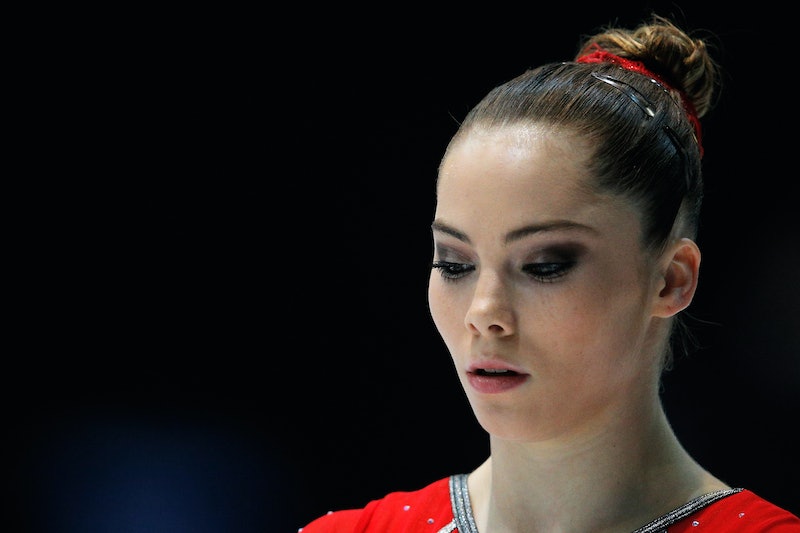 In a statement read aloud in court Tuesday, Olympian McKayla Maroney said that her former coach Larry Nassar, who pleaded guilty in November to sexually assaulting children, is "a monster of a human being" who "deserves to spend the rest of his life in prison." Nassar was Maroney's coach when she was on the national team and, later, the U.S. gymnastics team at the Olympics; the gold medalist says that Nassar molested her for years during that time, beginning when she was 13 years old.

"Dr. Nassar was not a doctor," Maroney's statement read in part. "He in fact is, was, and forever shall be, a child molester, and a monster of a human being. End of story! He abused my trust, he abused my body, and he left scars on my psyche that may never go away."

Nassar has been accused of molesting more than 130 of his former patients. In November, he pleaded guilty to 10 sexual assault charges, including assaulting two girls younger than 13. The next month, he pleaded guilty to three counts of possessing child pornography in a separate criminal case. The latter plea means that he'll spend 60 years in prison, effectively a life sentence for the 54-year-old former physician.

Sentencing for Nassar's sexual assault plea is taking place over the course of several days to allow his alleged victims — over 100 of them — to tell their stories. Although Maroney's statement was read by a third party, many of Nassar's survivors have shown up in person in court to confront him, and one testimony in particular drew significant attention for its gut-wrenching bluntness.

In December 2016, USA Gymnastics paid Maroney $1.25 million as part of a confidential settlement; in exchange, she signed a non-disclosure agreement forbidding her from going public with her accusations against Nassar. However, she accused Nassar publicly over Twitter in October, and later filed a lawsuit against him. USA Gymnastics announced on Wednesday that it will waive the $100,000 fine Maroney had agreed to pay if she ever broke her NDA.

For as long as I can remember, gymnastics was my life. As a child, my mom said, “I need to put this child in gymnastics, to tire her out.” You could say I was in gymnastics since the age of 18 months. I’ve always felt comfortable in the gym, sort of my home away from home.

I was 7 years old for my first competition. I remember getting ready for the meet. I got my hair braided with a cool bow, and some sparkles. I got to wear this really awesome leo, and wore a matching warm-up. Life was good, I looked good… and I was pretty certain that one day I’d be heading off to the Olympics!

The Olympics is something that brings people hope and joy. It inspires people to fight for their dreams, because anything is possible with hard work and dedication. I remember watching the 2004 Olympics. I was 8 years old, and I told myself that one day I would wear that red, white, and blue leotard, and compete for my country. Sure, from the outside looking in, it’s a remarkable and amazing story. I did it. I got there, but not without a price.

I made the U.S. National Team at the age of 14, and began to compete throughout the world for my country. When I first met Larry Nassar, he was the doctor for our national team and our Olympic team. I was told to trust him, that he would treat my injuries and make it possible for me to achieve my Olympic dreams. Dr. Nassar told me that I was receiving “medically necessary treatment that he had been performing on patients for over 30 years.”

As it turns out, much to my demise, Dr Nassar was not a doctor. He in fact is, was, and forever shall be, a child molester, and a monster of a human being. End of story! He abused my trust, he abused my body, and he left scars on my psyche that may never go away.

It all started when I was 13 or 14 years old, at one of my first national team training camps, in Texas, and it didn’t end until I left the sport. It seemed whenever and wherever this man could find the chance, I was “treated.” It happened in London before my team and I won the gold medal, and it happened before I won my silver medal. For me, the scariest night of my life happened when I was 15 years old. I had flown all day and night with the team to get to Tokyo. He’d given me a sleeping pill for the flight, and the next thing I know, I was all alone with him in his hotel room getting a “treatment.” I thought I was going to die that night.

Because the national team training camps did not allow parents to be present, my mom and dad were unable to observe what Nassar was doing, and this has imposed a terrible and undeserved burden of guilt on my loving family.

Larry Nassar deserves to spend the rest of his life in prison. Not only because of what he did to me, my teammates, and so many other little girls — he needs to be behind bars so he will never prey upon another child. I urge you to impose the maximum sentence upon him.

Ever since I went public with my story, I have been inspired and uplifted by the love and support of my former teammates, fans, and many other good people.

People should know that sexual abuse of children is not just happening in Hollywood, in the media, or in the halls of Congress. This is happening everywhere. Wherever there is a position of power, there seems to be potential for abuse. I had a dream to go to the Olympics, and the things that I had to endure to get there were unnecessary and disgusting.

I was deeply saddened by the stories of my fellow Olympic teammates that suffered as I did at the hands of Larry Nassar. More than 140 women and girls had to say, “#MeToo” to Nassar’s sexual assaults and hundreds more were victimized to create the pornographic images that fueled his evil desires.

A question that has been asked over and over is: How could have Larry Nassar been allowed to assault so many women and girls for more than two decades?

The answer to that question lies in the failure of not one, but three major institutions to stop him — Michigan State University, USA Gymnastics, and the United States Olympic Committee.

When my story became public, the U.S. Olympic Committee said, “Each doctor working with our athletes undergoes background checks including an evaluation of medical licensure actions. Unfortunately, this predator was not identified by any organization during the time in question.” Reports in the nation’s leading newspaper and media outlets document credible claims that Michigan State University trainers and coaches received complaints about Nassar going back to the late 1990s. These complaints were ignored.

Nassar was not even licensed to practice medicine in Texas, yet he “treated” and abused girls at the Karolyi Ranch Olympic Training Center in Huntsville, Texas, for more than 15 years.

When other Olympic and national team athletes complained to USA Gymnastics about Larry Nassar in 2015, he was allowed to retire as the Olympic Team doctor and Michigan State University was never informed of the complaints against him.

He returned to Michigan State University and allegedly continued to molest young girls until he was finally arrested nearly a year later.

It is my hope that federal and state law enforcement agencies will not close the book on the Larry Nassar scandal after he receives his just punishment. It is time to hold the leadership of Michigan State University, USA Gymnastics and the United States Olympic Committee accountable for allowing, and in some cases enabling, his crimes.

Our silence has given the wrong people power for too long, and it’s time to take our power back.