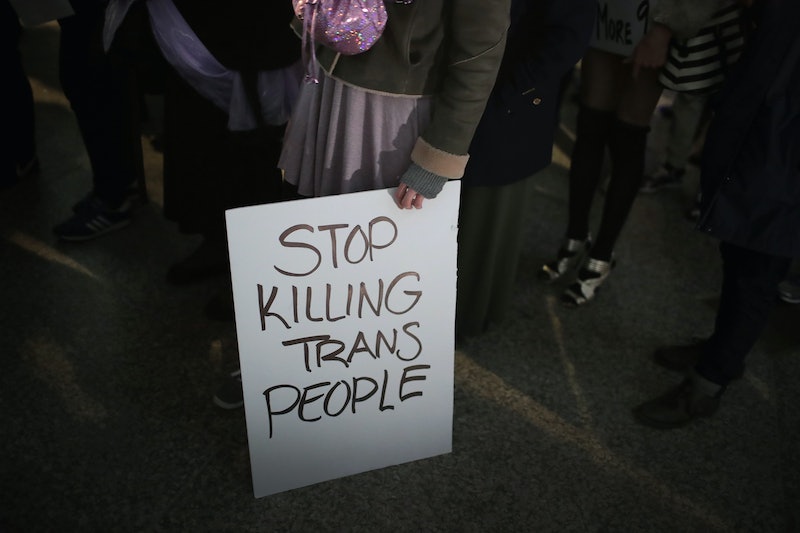 A recent FBI report showed that the number of hate crimes in America, including against transgender people, rose in 2016 for the second year in a row. And we now know, according to the Human Rights Campaign (HRC), that 2017 is the deadliest year on record for transgender individuals. At least 25 transgender individuals have been killed in the U.S. this year, by HRC's count.

“Unfortunately, it’s not a terrible surprise to us," says Raffi Freedman-Gurspan, Director of External Affairs at the National Center for Transgender Equality (NCTE). She tells Bustle "this is something that has been happening unfortunately for many, many years.”

The FBI's report had found there were a total of 111 hate crimes committed against transgender individuals in 2016, up from 76 in 2015. Freedman-Gurspan notes that the lack of long-term data collection on these crimes makes it difficult to draw solid conclusions from that report. Is violence against transgender individuals really going up, or is the nation as a whole just making more of an effort to accurately report those hate crimes? "It's hard to see a correlation without having a basis for the past," Freedman-Gurspan says.

Sarah McBride, HRC's national press secretary, sees the lack of consistent, reliable data collection on anti-transgender violence as a serious problem in need of a policy solution. She tells Bustle that at the federal level, "it is still voluntary for local and state law enforcement agencies to report their hate crime data as it relates to anti-LGBTQ people.” There are certain localities that routinely report the number of hate crimes motivated by someone's gender identity or sexual orientation as zero; McBride says that defies belief.

That's why she tells Bustle it's crucial that data collection on such crimes be made mandatory. "If we don’t have a clear picture” of where and what types of violence transgender people are suffering, then it becomes “more difficult to craft policy solutions," McBride says.

"When transphobia mixes with misogyny and racism, it can have oftentimes fatal consequences."

The data we do have shows that the South is seeing a higher rate of deadly violence against transgender people than any other area of the country, however. Sixteen of the 25 deaths that HRC attributed to anti-transgender violence this year occurred in the South, with four in the state of Georgia alone.

McBride also says particular demographic factors in the South may contribute to the higher rate of deadly hate crimes against transgender people living below the Mason-Dixon line. Of the 25 transgender individuals killed in 2017, 21 were women of color. As McBride points out, much of the violence against transgender people targets "particularly trans women of color;" since the South has a larger minority population than many other parts of the country, the demographics suggest it would also see higher rates of anti-transgender violence. The South's particular history with racism is also a likely contributing factor, according to McBride, who tells Bustle, "when transphobia mixes with misogyny and racism, it can have oftentimes fatal consequences."

Both Freedman-Gurspan and McBride say public servants and politicians have a clear role to play in slowing this rise in anti-transgender violence. For Freedman-Gurspan, training and accountability for law enforcement is critical. Transgender advocates must "make sure we have law enforcement on our side,” she tells Bustle, particularly when it comes to reporting and prosecuting cases of anti-transgender violence.

McBride also argues that politicians' behavior and rhetoric can — and does — influence how the general population responds to transgender individuals. And she says she's not satisfied with the attitude the U.S. government currently has toward the transgender community. "We need our political leaders to conduct themselves in a way that makes abundantly clear that every person is worthy of dignity and respect, that violence is never appropriate,” McBride says.

That's in contrast to some of the language from politicians that she says is used to “foster bigotry and pass blame” on minorities for America’s problems. With violence against transgender individuals on the rise, a united political message of dignity and respect for all Americans certainly couldn't hurt.