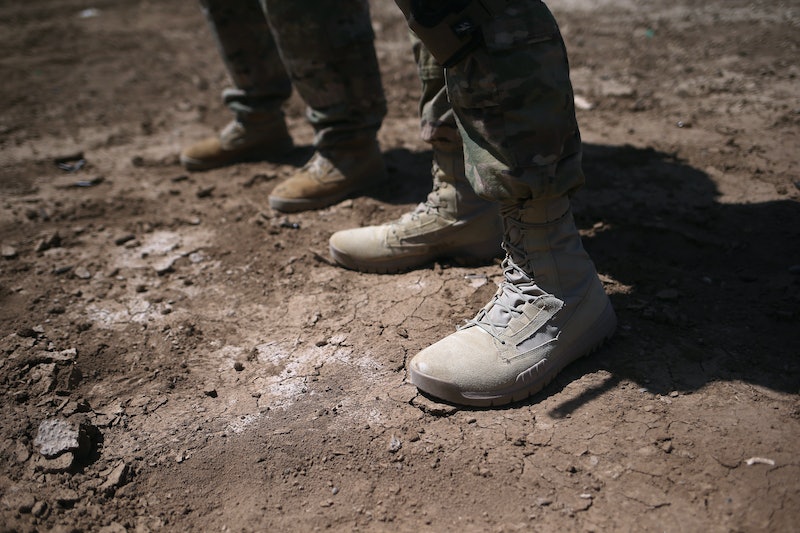 A federal court ruling earlier this month ordered the military to accept openly transgender recruits beginning Jan. 1, and the Pentagon confirmed that it would comply. A Pentagon memo issued Dec. 8 stated that all applicants will be evaluated equally, and certain aspects of military life will be determined based on the applicant's preferred gender. At the same time, though, one such rule dictates that transgender military recruits must wear underwear designated for their birth sex.

The memo said, "As always, every applicant will be treated with dignity and respect," stating that room assignments, height and weight standards, and chaperone and bathroom assignments will be made based on the recruits' preferred gender. Transgender recruits will also be called by their preferred names.

However, the memo differentiated between trans recruits who have and haven't had gender confirmation surgery or hormone therapy. Transgender men who have not had either medical treatment will still wear female underwear, while transgender women who have not had surgery or hormone therapy will wear male undergarments. The same rule will apply to non-binary recruits, requiring them to wear underwear correlating with their sex at birth. The memo does not state the reason for the underwear rule, but it also says trans recruits who haven't had surgery will undergo medical exams tailored to their sex at birth.

As far as how transgender recruits will apply for service, the memo dictates that they must provide a birth certificate, court order, or U.S. passport reflecting their preferred gender. This could prove challenging for some trans folks, as the policies differ state by state. 10 states and the District of Columbia allow people to change their gender on identifying documents if they provide a notarized note from their doctor. However, 37 states require the person to prove they've had surgery — and Idaho, Ohio and Tennessee don't permit anyone to change the gender on their birth certificate.

Because most states that allow birth certificate changes demand gender confirmation surgery, the majority of trans recruits with adequate documentation to join under their preferred gender will be allowed to wear underwear corresponding with their identifying gender. But for those from states that don't require surgery, the rule will force them to wear garments that don't match their gender.

The Trump administration is still fighting to completely ban transgender folks from the military after the president tweeted about the ban in July and subsequently signed an executive order in August. Though the Pentagon said it will comply with court orders to allow trans recruits while the court battle presses on, White House press secretary Sarah Huckabee Sanders said the Justice Department is "reviewing the legal options to ensure that the president's directive can be implemented."

The memo detailing rules around trans recruits was used by lawyers opposing the ban to prove the military is able to admit transgender soldiers. "On Dec. 8, 2017 — prior to the district court’s denial of a stay and prior to the government’s stay motion before this Court — the Department of Defense issued interim policy guidance for processing transgender applicants for military service beginning on January 1, 2018," the plaintiffs' lawyers wrote in a court filing, according to The Hill.

The administration responded in another court filing, writing that "all that this memorandum shows is that the military is scrambling to comply with the injunction," adding that the rules are "no substitute for the training necessary" to ensure the policy admitting transgender recruits is enforced properly.

Despite the administration's appeals, transgender recruits will be allowed to serve at the beginning of 2018. And as it stands now, they'll have to follow the Pentagon's rules on what underwear to wear while navigating military life as the first openly transgender recruits.