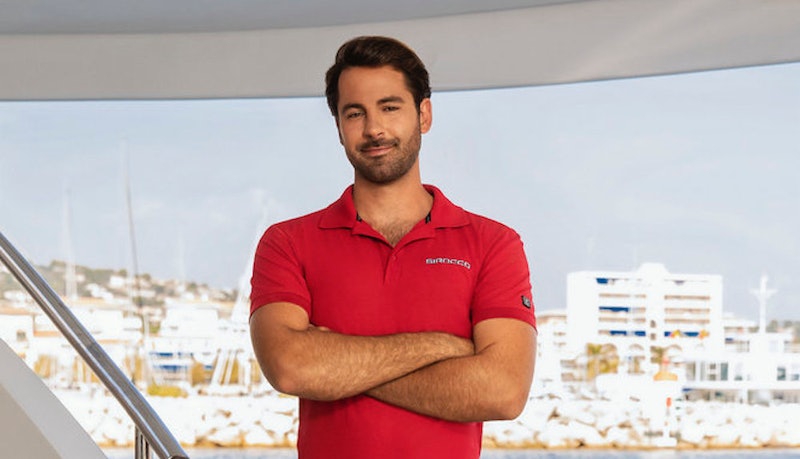 Below Deck Mediterranean is in the south of France this season, but one of its new crew members comes all the way from Down Under. Below Deck Mediterranean star Travis grew up in Perth, Australia, according to his Bravo bio. He then dropped out of high school to find "true happiness," working odd jobs along the way. Eventually he found work as a deckhand, which he's been doing for the last eight years. But just because he has a job doesn't mean he doesn't also party hard. His bio says he's a "jokester, party boy 'yachtie' with a work hard, play harder attitude."

Even with that reputation, Travis said in the premiere that he's working hard to change people's opinions of him. "Because of the stupid sh*t that I do, people think that I'm a complete idiot. But I like to prove those people wrong," he said. And he may have already proved one person wrong: Captain Sandy Yawn. She can be seen in the premiere calling Travis the "best tender driver I've ever met in my life." (Tenders are the smaller boats used to ferry people and goods from yachts to land and vice versa.)

Indeed, Travis' bio says "he appreciates good work ethic paired with strong communication skills." Speaking of communication, he had some serious words for chef Mila when she said something extremely offensive. The series trailer previously depicted Mila saying, "I don't want my son to see two men kissing each other." Travis was clearly upset by what she said and answered, "Sit on the opposite end of this f*cking table from me." It wasn't clear at the time what the context was, but a sneak peek on Bravo shows more of the conversation.

In the clip, Mila observes that Travis has a nose ring, and says that the piece of jewelry would make her question his sexuality. It's then that she goes on her homophobic tirade.

"I don't want to see a man kissing a man in front of me ... In your home, you guys can do whatever you want. I don't want my son to be growing up and seeing two men kissing each other and thinking this is normal because this is not f*cking normal."

It's clear from the trailers and clips that this conversation will be an issue between Mila and Travis this season. But it's not Travis' fault that Mila is close-minded. So, enough about her. Here's what else you need to know about Travis.

Gingzilla is a comedian who recently auditioned on this season of AGT. Gingzilla is from Sydney, Australia so it actually makes sense that the two of them could have run into each other.

Travis Posed In Front Of The Sydney Opera House In Costume

In Fact, He's In Costume A Lot

He Also Posed With These Two Cute Dogs

Or, as Travis called them, "bloody beautiful fluffbuckets."

Is Travis enough of a hard worker to overrule his party-all-the-time reputation? Fans will just have to keep watching Below Deck Mediterranean to find out.

More like this
Here's The Full List Of Zach's Confirmed & Potential 'Bachelor' Contestants
By Kadin Burnett and Grace Wehniainen
Clayton & Susie Broke Up, Citing "A Significant Amount Of Pain" After 'The Bachelor'
By Jordyn Tilchen
What Is 'Pretty Wild' Star Tess Taylor Up To Now?
By Morgan Leigh Davies
How To Stream 'Pretty Wild'
By Arya Roshanian
Get Even More From Bustle — Sign Up For The Newsletter