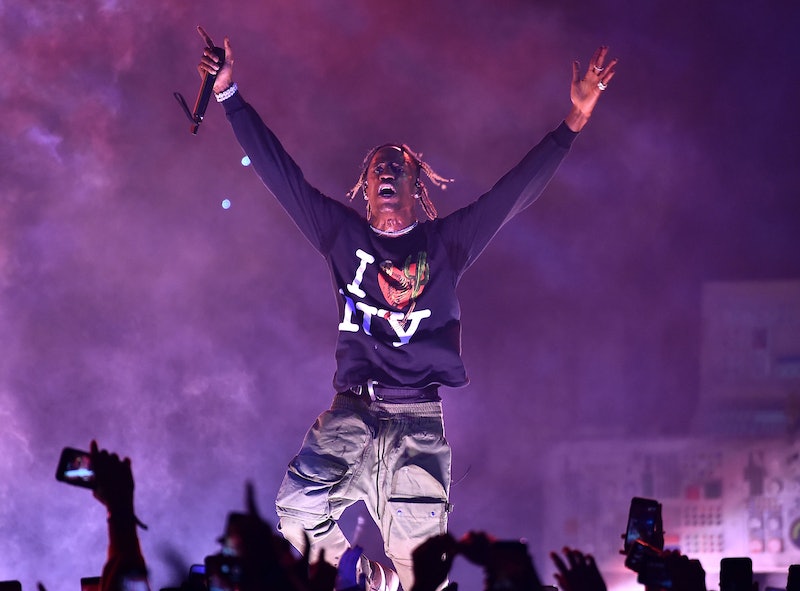 After facing backlash to his appearance at the Super Bowl, Travis Scott is using the occasion to raise money for a good cause. Travis Scott and the NFL are donating $500,000 to Dream Corps, Variety reported on Sunday, and the rapper issued a statement about why the donation is so important to him. Bustle reached out to a representative for Scott about the nature of the partnership and donation, but did had not heard back at time of publication.

Artists at the Super Bowl halftime show aren't paid for their performances, Variety had previously reported. So the money that Scott and the NFL are giving the non-profit is separate from the performance itself. It's unclear whether the donation money is coming from Scott or the NFL, or some combination thereof.

"I back anyone who takes a stand for what they believe in," Scott said in a statement provided to Variety. "I know being an artist that it's in my power to inspire. So before confirming the Super Bowl Halftime performance, I made sure to partner with the NFL on this important donation. I am proud to support Dream Corps and the work they do that will hopefully inspire and promote change."

Billboard echoed Variety's report, citing an unnamed source who claimed that Scott made sure the NFL would partner with him on the donation before signing on to perform at the February show.

When the news first broke last month that Scott would be joining Maroon 5 at the Feb. 3 show, there was a good amount of backlash, despite the fact that nothing was confirmed until recently. As Variety noted, a majority of the pushback was due to the NFL's history with Colin Kaepernick, former quarterback for the San Francisco 49ers. Kaepernick, of course, started the "take a knee" movement to protest police brutality when he began to kneel during the National Anthem at games, a silent protest that the player believes led to his alleged blacklisting from the professional league. Kaepernick has since filed a lawsuit against the NFL, alleging that he lost his job in the league because of the protest. He hasn't been on an NFL team in almost two years.

And some fans, including Michael B. Jordan, have expressed their opinion that performing at the halftime show is siding with the NFL over Kaepernick. Jordan spoke to TMZ about Scott's Super Bowl performance in December, saying, "We're still trying to stand behind something right now." He added that he hoped Scott wouldn't perform at the show. Rev. Al Sharpton also criticized Scott for participating in the halftime show, calling the "Goosebumps" rapper a hypocrite during an interview with TMZ. And other artists have reportedly turned down offers for Super Bowl performances.

Still, it does sound like Scott has given a lot of thought to the issue. And there's no doubt that his donation will help plenty of people. As Variety explained, Dream Corps was started by CNN commentator Van Jones, and its mission is to change the criminal justice system and "support economic, environmental, and criminal justice innovators," according to the organization's website. This may not be Scott's only donation, either — Variety reported that the rapper might also give money to other social justice causes.

It looks like Scott knew that not everyone would be happy with his decision to perform at the show, and he's trying to make the most of the immense platform the NFL is giving him. Regardless of anything else, Scott will be doing a lot of good with this donation. And, who knows, maybe it will help steer the NFL in the right direction.