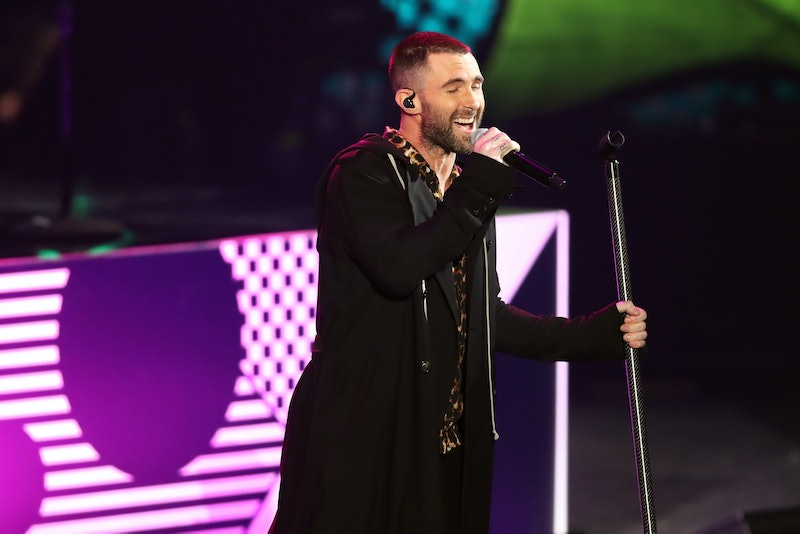 On Sunday, Jan. 13, the NFL officially confirmed rappers Big Boi and Travis Scott will perform at the Super Bowl LIII Halftime Show alongside Maroon 5, as reported by The Wrap. This marks the first time that any of the announced performers have played at the Super Bowl. However, the confirmation comes at a time when controversy is surrounding the 2019 Halftime Show. Critics, including comedian Amy Schumer, have urged musicians to turn down offers to perform at the game in protest of the NFL's treatment of San Francisco 49ers quarterback Colin Kaepernick.

The controversy seems to have prompted Scott to announce he's partnering with the NFL to donate $500,000 to the non-profit organization Dream Corps, according to Variety. Shortly before the lineup was confirmed, Scott issued a statement about his potential involvement in the show. "I back anyone who takes a stand for what they believe in," his statement reads. "I know being an artist that it's in my power to inspire. So before confirming the Super Bowl Halftime performance, I made sure to partner with the NFL on this important donation. I am proud to support Dream Corps and the work they do that will hopefully inspire and promote change."

Founded by CNN's Van Jones, Dream Corps' mission is to "inspire action, serve justice, and improve people's lives," according to their website. The non-profit's primary focus appears to be backing social justice movements.

Scott is coming off a major year for his career. Not only did he recently announce more dates for his Astroworld tour, the rapper is also nominated for three Grammys at the 2019 awards which are scheduled to air Sunday, Feb. 10 on CBS — just one week after the artist's Feb. 3 halftime performance. On Dec. 8, Scott responded to his nominations with tweet of him carrying a Grammys duffel bag. "Thank u record academy it's took a whole 24hrs for it to really hit me. Plus this has Also been my duffle all year," he wrote.

Although he may not be as well-known as Travis is, having Big Boi play at the Halftime Show is a coup for the NFL. With the big game taking place in Atlanta this year, it's important that the rapper is a Georgia native, but he's also incredibly accomplished. Formerly a member of the rap duo OutKast, Big Boi has won six Grammys over the course of his career so far.

Prior to the confirmation that the Adam Levine-led band Maroon 5, Scott, and Big Boi will be playing the 2019 Halftime Show, it was rumored that a number of musicians turned the NFL down. A source told Entertainment Tonight that Rihanna was one of the first singers to be offered the gig, but she reportedly turned it down in support of Kaepernick. Other artists who were rumored to have said no to the job include JAY-Z and Cardi B. It should be noted that Cardi B sings on Maroon 5's hit 2018 track "Girls Like You."

Despite the controversy surrounding this year's show, the impact that performing at the Super Bowl can have on an artist's career remains huge. As Variety points out, the Halftime Show is reportedly an unpaid gig, but it's still a coveted one, even during a year when accepting the offer was less straightforward than it has been in the past. It's unclear how fans will respond to Maroon 5, Scott, and Big Boi performing at the 2019 Super Bowl Halftime Show, but there's no denying that the NFL has put together a strong lineup of artists.

More like this
Twitter Is Freaking Out Over Rihanna’s 2023 Super Bowl Halftime Show Announcement
By Stephanie Topacio Long
Everything To Know About Taylor Swift’s 10th Studio Album, 'Midnights'
By Grace Wehniainen and Jake Viswanath
Is Dua Lipa Dating Trevor Noah? New Photos Show Them Kissing & Hugging
By Brian Anthony Hernandez and Martha Sorren
Lizzo Twerks While Playing James Madison's 200-Year-Old Crystal Flute Onstage
By Radhika Menon
Get Even More From Bustle — Sign Up For The Newsletter