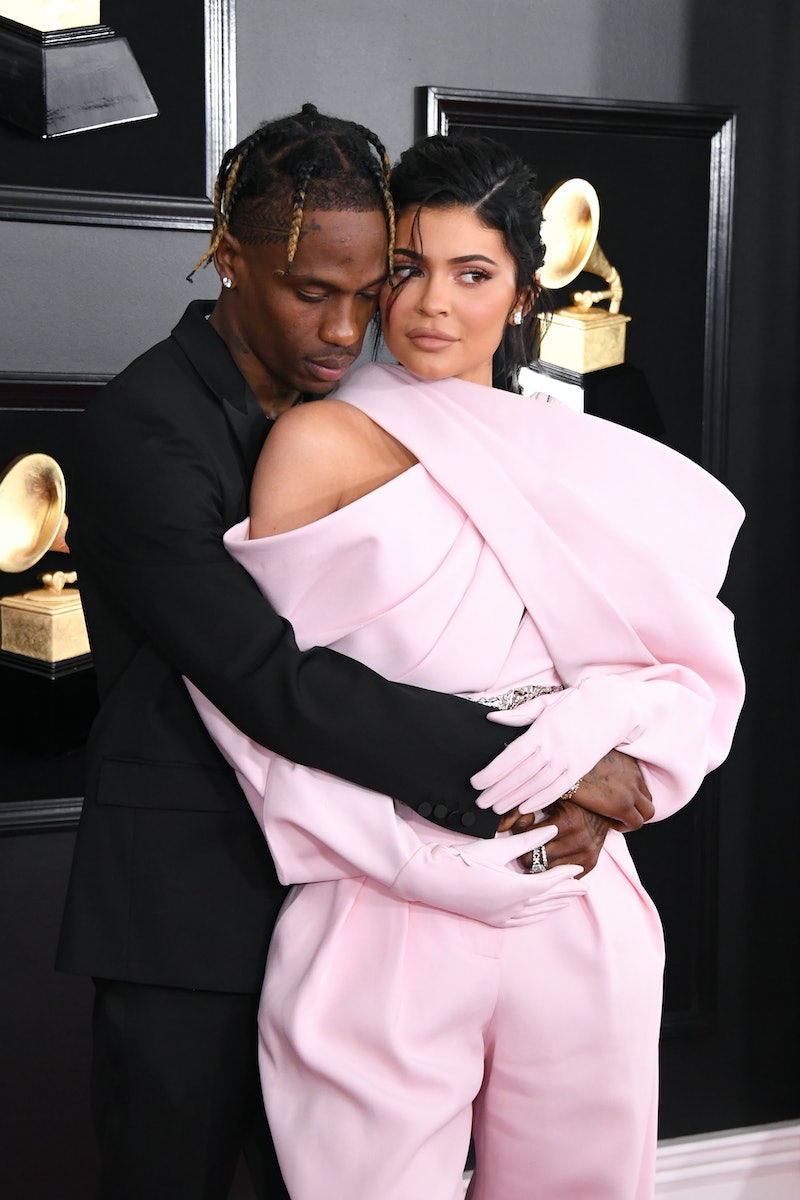 There's already enough Kardashian/Jenner news to follow, based on updates the family shares themselves. Add in the gossip, and there is truly too much to keep up with. Recently, rumors started to circulate that Travis Scott cheated on Kylie Jenner. However, Scott's concert shoutout to Jenner on Saturday, March 2 officially shut down the notion that there's any drama going on, which his rep had already previously denied. On Feb. 28, Scott's rep told Entertainment Tonight, "Travis Scott vehemently denies he cheated on Kylie. It is not true. He did not cheat."

Over the weekend, TMZ posted a video from the rapper's concert at Madison Square Garden. After finishing his song "Sicko Mode," he told the crowd, "I love ya’ll, NYC. I love ya’ll! Thank y'all for coming out." And he finished with, "I love you, wifey!" Just in case anyone has been living under a rock, that "wifey" is none other than the Kylie Cosmetics founder. Complex reported that Scott advised concertgoers to "keep family first" that same night, further showing where his priorities are right now.

Unfortunately, this gossip stemmed from Scott's cancellation of his show in Buffalo, New York last week. TMZ initially claimed that the "Butterfly Effect" rapper postponed the show, because Jenner accused him of cheating. But in the aforementioned statement to Entertainment Tonight, Scott's rep emphasized, "He canceled one show tonight because he is under the weather."

Aside from the official statement and the mid-concert announcements, the rapper made another interesting move. It appears that Scott deleted his Instagram account, or he at least deactivated it. At the time of reporting, the page does not exist.

This isn't the first time that Stormi's parents have faced cheating rumors, though. In December 2018, a video of a Scott lookalike getting cozy with a woman hit the internet. This was a fake video that was later revealed to be a "prank." However, before the truth came out, some people assumed that it actually was the rapper and he adamantly denied the story.

"Sh*t cap assss f*kkkk TMZ ain't post this sh*t. Trolls working hard today. I don't be on balcony wit no thots. That sh*t lame. Try again u trollssss. Me and my wife sturdy. Back to [celebrating]!!!"

He actually denied the cheating two different times on the same post. He also commented, "Only got love for my wife. No time to be wasting. Try again."

Just to be clear, Scott denied those December 2018 cheating claims for a third time with a post in his Instagram Story. He told his followers,

"Trolls always wanna create some fake sh*t to destroy real love. GOING OVER BOARD TO MAKE SH*T LOOK LIKE [IT] IS NOT IS EVIL. I hate acknowledging sh*t. But quit try to take joy from sh*t that's good. I pray to god block out all evil. BACK TO CELEBRATING!!!"

Back in December 2018, Jenner chimed in herself with an Instagram Story. The makeup mogul shared a screenshot of the prank video and wrote,

"Idk if this is really a social experiment to some people but you're messing with real people, real relationships, real family. I'm happy my relationship is strong because this is getting out of hand. the internet scares me sometimes for real"

There are so many true stories about the Kardashian/Jenner family to keep up with that come straight from the family members. It would be much easier to just focus on those, instead of circulating every single (often unproven) rumor. Nevertheless, no one can blame Scott for shooting down the cheating accusations — multiple times. Hopefully, this will be the last time he has to do so.