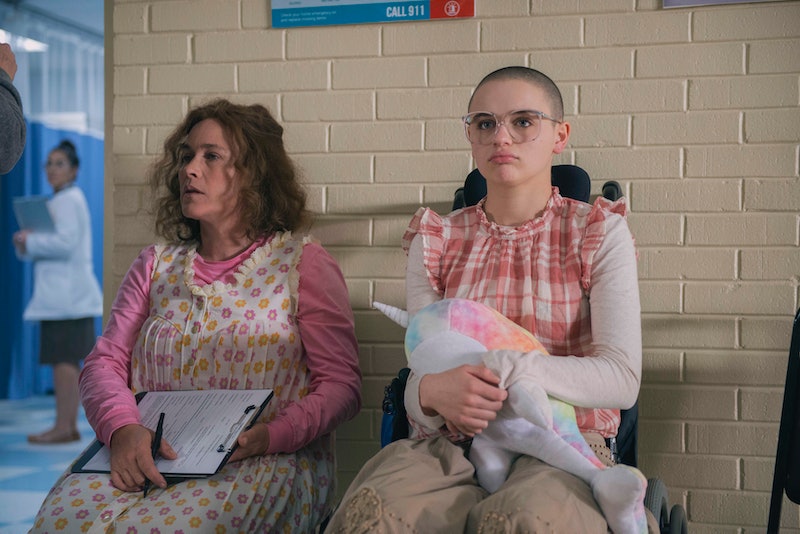 The first season of Hulu’s new show The Act details the true story of Gypsy Rose Blanchard and her mother Dee Dee Blanchard, who raised her healthy daughter as if she was terminally ill. The series, along with last summer’s HBO adaptation Sharp Objects, put a spotlight on the controversial condition Factitious Disorder Imposed on Another, more commonly known as Munchausen Syndrome by proxy (MBP).

The Cleveland Clinic defines the condition as “a mental illness in which a person acts as if an individual he or she is caring for has a physical or mental illness when the person is not really sick,” typically for sympathy or other benefits. According to the Clinic, the rare condition affects an estimated two out of 100,000 children, with roughly 1,000 of the annual 2.5 million reported cases of child abuse being linked to MBP. Considering the abusive nature of the illness, child protective services, law enforcement, and doctors are all often involved in dealing with its impact on both the victim and the perpetrator. But when it comes to actually treating caregivers with Munchausen by proxy, experts agree that the task can present many unique, and often insurmountable, challenges.

“There is no consensus among experts on what kind of treatment is best for people who engage in Munchausen by proxy," Dr. Marc D. Feldman, an expert in Munchausen by proxy and the author of Dying to be Ill: True Stories of Medical Deception, tells Bustle. "Some would even say that it isn't a mental disorder, but simply a form of abuse like physical abuse or sexual abuse.”

Dr. Feldman says that if treatment is attempted, it will start out by figuring out if the perpetrator has any underlying, untreated mental illness. If the perpetrator does have other underlying mental disorders, Dr. Feldman says this improves the person’s prognosis, since these conditions are generally treatable with medications and therapies like cognitive behavioral therapy. “If not, the patient probably has a serious personality disorder for which medication generally won't help,” he says. “The focus instead will be on teaching the patient to use words instead of harmful actions to get needs met.”

Even so, Dr. Feldman says that it may be years before the caregiver exhibits enough progress to even consider reunification with their child. In many cases, reunification may never become possible. He adds that most perpetrators will never actually admit to the MBP, complicating any potential avenues for treatment as “there is little basis for trying to establish a truly helpful therapeutic alliance.”

Dr. Brenda Bursch, a clinician, forensic expert, and consultant on the topic of Munchausen by proxy, tells Bustle that in cases of MBP child abuse, the condition is “often considered ‘untreatable’ due to denial of abuse, high risk to the child, and personality disorders in abusers that are difficult to treat.”

Based on Dr. Bursch’s clinical experience treating the condition and the scientific literature on the topic, she says the key treatment goal is for the perpetrator to acknowledge and take responsibility for their behaviors that harmed or could have harmed the victim. She adds that perpetrators who are likely to have the “best outcomes” with treatment have characteristics like engaging in lower severity of abuse, acknowledging the abuse, having remorse and empathy for the victim, and displaying a motivation to improve. Cases where the perpetrator engaged in severe abuse, has a history of significant abuse in their own childhood, has a severe personality disorder, or maintains persistent denial of their abusive behavior are much more difficult to treat.

“For those abusers on the severe end of the spectrum (which include most of the cases that are reported in the media), treatment is rarely successful. In fact, very few abusers admit to the abuse, which is the first step that is needed for successful therapy,” Dr. Bursch says. “Successful reunification has occurred with milder cases in which the parent completes successful therapy."

Though there are many challenges when it comes to treating perpetrators, the primary focus when dealing with MBP needs to be on the victim. Their protection in both the short-term and the long-term is paramount, as is treating the after-effects of abuse.

More like this
Ashamed Of Your Screen Time Stats? Here's How To Change That
By Alexis Morillo
11 Exercises For Dowager's Hump That'll Help Your Neck Posture
By Carolyn Steber
Kourtney Kardashian’s Wellness Guru Shares Her #1 Tip For Better Health
By Taylor Jean Stephan
Here’s Where The NHS Nurses’ Strike Currently Stands
By Sophie McEvoy
Get Even More From Bustle — Sign Up For The Newsletter
From hair trends to relationship advice, our daily newsletter has everything you need to sound like a person who’s on TikTok, even if you aren’t.