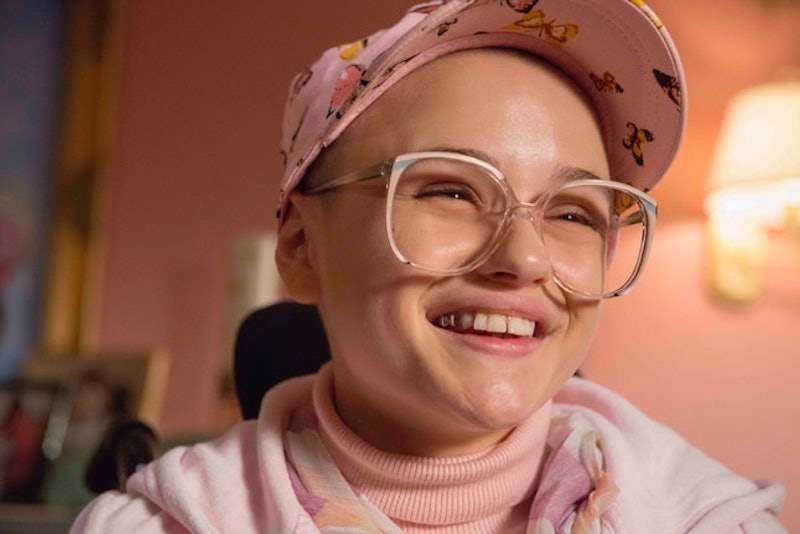 If you've been keeping up with The Act on Hulu, the dramatization of Gypsy Rose Blanchard's alleged abuse at the hands of her mother Dee Dee, you're probably curious about what drives a caregiver to purposefully make a child seem sick. The act of intentionally making a dependent person seem ill for attention or other gains is called Munchausen syndrome by proxy. While the alleged abuse portrayed in The Act is horrifying, it's not known how common Munchausen by proxy actually is because it's so hard to detect.

The recent rash of exposure thanks to The Act, and HBO productions Mommy Dead & Dearest (also about Blanchard and Dee Dee) and Sharp Objects, are bringing this rare disorder to light. According to the Cleveland Clinic, Munchausen by proxy is now more commonly referred to as factitious disorder imposed on another (FDIA). It's not to be confused with the factitious disorder Munchausen syndrome, which is when a person intentionally makes themselves sick for attention.

The Cleveland Clinic reported that about 1 percent of people have Munchausen syndrome and two in 100,000 children are thought to be the victims of Munchausen by proxy. However, because caregivers go to great lengths to manipulate family, friends, and doctors, it's not known how many cases go undetected.

"People with FDIA are even willing to have the child or patient undergo painful or risky tests and operations in order to get the sympathy and special attention given to people who are truly ill and their families," the Cleveland Clinic explained.

If a death results from Munchausen by proxy, it's is typically the victim, not the perpetrator, who dies. Marc Feldman, clinical professor of psychiatry at the University of Alabama and author of the book Playing Sick?, told the Springfield News-Leader that Blanchard's case — she is currently serving 10 years in prison for her involvement in her mother's murder — is unprecedented. He said that in his 25 years studying the disorder, this is the first case he's come across where a child retaliated and caused the death of a caregiver in order to escape the abuse.

He also noted that Blanchard's road to recovery may not be an easy one. "Adult survivors of Munchausen by proxy, they almost invariably have post-traumatic stress disorder. If not the full-blown disorder, at least symptoms like flashbacks." While Blanchard was in her early 20s when she participated in an alleged plot to kill her mother with her then-boyfriend, Nicholas Godejohn, she had been told by her mother that she was still a teenager.

In an interview with Dr. Phil, Blanchard claimed that if she didn't comply with her mother's wishes, she was beaten with coat hangers and berated. Some of the things Blanchard was allegedly subjected to include a forced feeding tube, the unnecessary removal of her salivary glands, myriad medications she didn't need (including one that made her teeth rot), and the use of a wheelchair even though she could walk without assistance.

Blanchard's is not the only high-profile story of Munchausen syndrome by proxy. A Dallas-Forth Worth CBS News affiliate reported in 2017 that an 8-year-old boy named Christopher Bowen was subjected to 323 hospital and doctor visits and 13 unnecessary surgeries despite being perfectly healthy. The boy's father reportedly tried to gain custody of his son to stop the alleged abuse, but like in many cases of Munchausen by proxy, sympathy was given to the caregiver of the "sick" child.

"The judge looked at myself and my attorney and said I can’t believe you’d even bring her back to court with your child about to die," Bowen's father Ryan Crawford told CBS News. A child protective services investigation ultimately found that the caregiver likely had Munchausen syndrome by proxy.

Because the disorder is rare and the perpetrators are so skilled at hiding the truth, Munchausen by proxy can be difficult to identify. Symptoms to look out for, according to the Cleveland Clinic, include an extensive history of hospitalizations, often with a strange set of symptoms; worsening of symptoms when the child is alone with the caregiver; symptoms that are at odds with diagnostic tests (like Dee Dee insisting Blanchard had muscular dystrophy despite the tests being negative); an unusual illness or death of a child; and signs of unexplained chemicals in the child's body.

"[Caregivers] might simply lie about symptoms, alter diagnostic tests (such as contaminating a urine sample), falsify medical records, or induce symptoms through various means, such as poisoning, suffocating, starving, and causing infection," the Cleveland Clinic explained.

If you suspect someone you know is a victim of Munchausen syndrome by proxy, the American Academy of Family Physicians said on its website that you can report it confidentially by calling Childhelp National Child Abuse Hotline at 1-800-4-A-CHILD (1-800-422-4453).