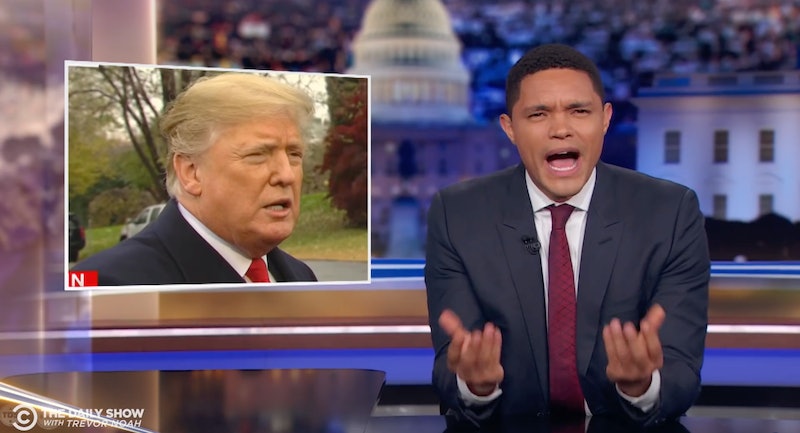 President Donald Trump's words often offer up material for late night TV, and Monday was no different. One presidential comment in particular had The Daily Show host scratching his head — and telling jokes. Trevor Noah said Trump's climate change views show he possesses "all the stupidity of mankind."

The U.S. government released a huge study on climate change over the holiday weekend, and the results weren't good. Climate change could kill thousands and shrink the economy, the report written by thousands of scientists found.

Noah pointed out that the report came from the Trump administration. "Surely the Trump of the administration will finally come on board," Noah says, setting up the jokes to come. On Monday, President Trump countered the government scientists and told reporters, "I don't believe it."

Noah had several takeaways on the matter in the five-minute segment on The Daily Show Monday night. He showed a video of Trump speaking to reporters about the report on his way to a campaign rally in Mississippi. Trump first said, "I’ve seen it. I’ve read some of it. It’s fine."

It was when Trump was asked about the economic impact portion of the report that he said he doesn't believe it. After showing a clip of that moment, Noah starts in, saying, "You 'don't believe it'? How? 'Fine'? How? How can one man possess all the stupidity of mankind?" Noah has a theory:

It’s like they edited his genes to give him superhuman stupidity. The scientists in the lab were like, "Well, what should we give him, superhuman strength?" "No, that’s dangerous to society, no, no, no. Let’s make him really stupid, what’s the worst that could happen?"

But Noah didn't critique just Trump. He also criticized how much the focus of the report has focused on the economic cost of climate change — not the potential harm to people. "I love how America always thinks about everything in economic terms," Noah says. "Like even when they talk about the end of the world, they say, 'Climate change is going to kill everybody — and that’s going to cost us like a billion dollars!'"

He added out that the report didn't just talk about the danger of climate in the future, but that "its effects are already here." "It's like when someone in the movie screams, 'Close the door, we're all going to die!' And then the friend turns and they're bleeding, and they're like, 'We're already dead.'"

Trevor also attacked climate change deniers who make arguments when they're not even scientists. He likened it first to having someone giving out cancer results and then adding, "But I’m not a doctor, I think you’re fine, trust me."

Then Noah made another comparison using daytime TV as an example. "Think of it this way: When Maury Povich brings someone on, if the DNA test says you are the father, then that’s it. The science has spoken," Noah jokes. "He doesn’t go, 'All right, we’ve done the DNA test, but in your opinion, Lavar, why are you not the father?'"

Noah's jokes on climate change — and about Trump — are much in line with his usual comedy fair. The serious findings of the government report, however, are not.