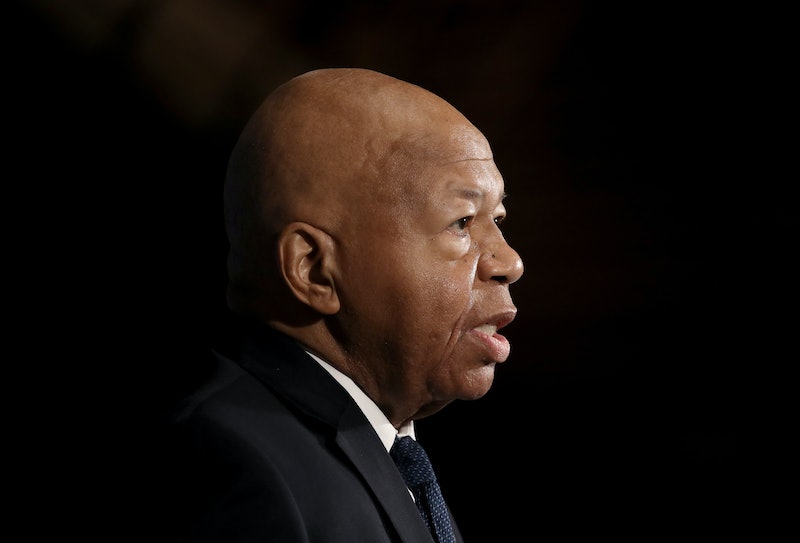 On Thursday, Oct. 17, esteemed Democrat Elijah E. Cummings died at 68 in his native city of Baltimore, due to undisclosed health problems. Tributes to Representative Cummings, who was currently serving his thirteenth term in Congress, are pouring in from both sides of the aisle.

Rep. Cummings had been a fixture of Congress for more than two decades, since he was first elected to the U.S. House of Representatives in 1996. Throughout the years, he built a reputation for being a protector of voting rights, advocating for lowering the prices of prescription drugs, and, of course, equality for all Americans. Recently, as chairman of the House Committee on Oversight, Cummings was a key figure in the impeachment inquiry of President Trump. And even before the inquiry became official, Cummings was a frequent target of Trump's social media ire. After Trump tweeted that Cummings' Baltimore district was "rat and rodent infested" in July, Cummings responded by inviting him to visit Baltimore. "I want President Trump to come to my district — oh God, I want him to come," Cummings said in a National Press Club speech in August, as reported by The Baltimore Sun. "Those in the highest levels of the government must stop invoking fear, using racist language, and encouraging reprehensible behavior."

Among the tributes released on Thursday was a statement from his wife, Maryland Democratic Party Chair Dr. Maya Rockeymoore Cummings, who wrote in part, "He worked until his last breath because he believed our democracy was the highest and best expression of our collective humanity." The words of his colleagues and admirers are, at the very least, a reflection of his influence in calling for humanity in the volatile world of American politics.

Sen. Kamala Harris honored Cummings as a "fearless leader, a protector of democracy, and a fighter for the people of Maryland."

In a series of tweets, Sen. Elizabeth Warren offered her condolences to Cummings' family. She added, "Good people everywhere will miss his rumbling voice, his kind heart, and his deep conviction that every human being has worth."

Sen. Cory Booker wrote an impassioned tribute to his fellow Democrat on Twitter, mourning the loss of "a true leader."

Queer Eye star Jonathan Van Ness also paid tribute to Cummings, promising to "honor his legacy with every once of the best of who we are."

Despite his past comments, Trump also tweeted out his "warmest condolences" to Cummings' family and friends. "His work and voice on so many fronts will be very hard, if not impossible, to replace!" he wrote, before retweeting a few of his older tweets, insulting Democrats and dismissing impeachment as "The Greatest Witch Hunt in American History!"

In his own twitter reaction, presidential candidate Beto O'Rourke recognized Cummings as a man who "always led with love."

Stacey Abrams, who is currently leading the fight to end voter suppression through her organization Fair Fight, remembered Cummings as "a mighty fighter for democracy, accountability, equity and justice."

Rep. Ayanna Pressley remembered Cummings in a tweet featuring a quote from his wife's statement. She added that she felt "deep gratitude to have spent these early months in Congress guided by his wisdom." Her colleague and friend Rep. Alexandra Ocasio-Cortez retweeted Pressley's message, adding in part, "Chairman Cummings was a giant: a universally respected leader who brought profound insight, commitment, and moral fortitude to Congress."

Actor and activist George Takei commended Cummings for being able to see the bigger picture, beyond the politics of Washington D.C. "I pray our leaders take heed," he wrote.

Former Rep. Jason Chaffetz was previously the head of the Oversight Committee, and would frequently be at odds with Cummings. Political disagreements aside, however, Chaffetz remembered Cummings as "an exceptional man" and added, "I will miss him and always cherish our friendship."

Sen. Bernie Sanders fondly remembered working with Cummings in Congress, writing, "His integrity and moral vision for his community and the country were extraordinary. He will be sorely missed."

Actor Yvette Nicole Brown was clearly shaken by the news, sending a series of tweets honoring Cummings, noting that he embodied "decency" and represented everything "missing in this current, evil regime."

Former Vice President Joe Biden shared a statement about the late representative on Twitter, sending his condolences to Cummings' family and "the entire city of Baltimore."

Lin-Manuel Miranda shared his own simple tribute, writing, "A giant has passed." No one could have said it better.