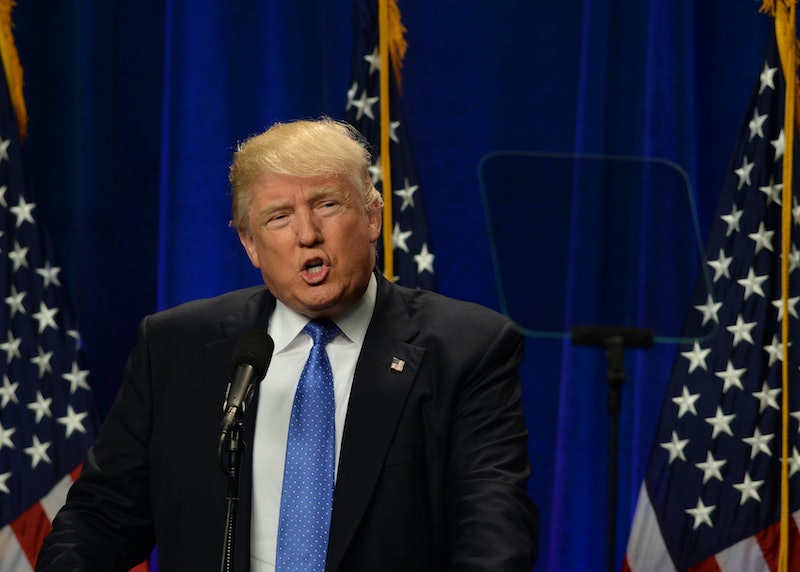 In a tweet on Friday, President Trump acknowledged LGBTQ Pride Month for the first time ever in his presidency. According to BuzzFeed News, he's also the first Republican president to ever acknowledge Pride. But his sentiment meant very little to people on Twitter, who pointed out that the Trump administration's policies have harmed LGBTQ people.

As we celebrate LGBT Pride Month and recognize the outstanding contributions LGBT people have made to our great Nation, let us also stand in solidarity with the many LGBT people who live in dozens of countries worldwide that punish, imprison, or even execute individuals on the basis of their sexual orientation. My Administration has launched a global campaign to decriminalize homosexuality and invite all nations to join us in this effort!

Daily Beast reporter Michelangelo Signorile was one of many to call out Trump's tweets as "fraudulent" and "an attempt to portray himself as supportive of LGBTQ people as he gears up for the 2020 re-election campaign." Signorile noted that Trump started rolling back protections for LGBTQ people early on in his presidency, when he tweeted in July 2017 that he would ban transgender people from serving in the military.

Trump's tweet also comes a week after his administration revealed a plan to remove discrimination protections for transgender people under the Affordable Care Act. According to the National Center for Transgender Equality, other anti-LGBTQ Trump administration policies include:

Trump has also reportedly nominated judges aligned with anti-LGBTQ hate groups, according to NBC News. (To see a complete list of Trump administration policies that directly affect or could affect the LGBTQ community, you can visit the Center's website.)

Trump's tweet drew criticism from advocates and lawmakers across Twitter. Rep. David Cicilline of Rhode Island wrote to Trump, "Nice Tweet. Now, how about telling Mitch McConnell to bring up the Equality Act?" The Equality Act, a bill that would include sex, sexual orientation, and gender identity to the list of protected classes under federal law, passed the House Friday, and many think it's unlikely it will pass in the Republican-controlled Senate, according to Roll Call.

Chad Griffin, president of the Human Rights Campaign, wrote in response to Trump:

You can't celebrate Pride and constantly undermine our rights -- including attacking #TransHealth, discharging #TransTroops, refusing to protect LGBTQ youth, and cozying up to dictators who brutalize & marginalize LGBTQ people. This is gross hypocrisy, with an emphasis on gross.

Pride Month was first created by President Bill Clinton in 1999, but was then called "Gay and Lesbian Pride Month," according to NBC News. President George W. Bush never recognized Pride Month during his eight years in office, but President Barack Obama recognized it every year.

Though Trump has finally joined in on the tradition, the people he's recognizing clearly have a message for him: Actions speak louder than words.