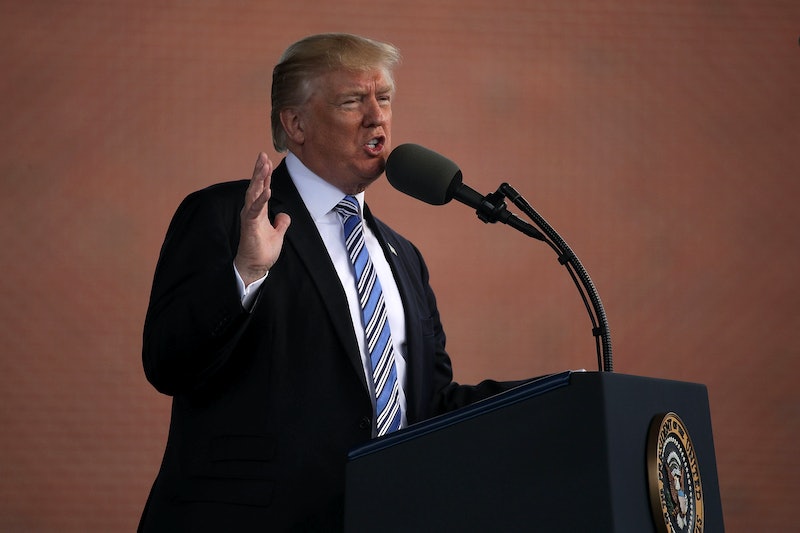 On Tuesday morning, U.S. President Donald Trump reacted to the Manchester explosions by referring to the culprit as an evil loser. At the time, Trump was visiting Palestinian Authority President Mahmoud Abbas and made the statement from Bethlehem. Though Trump expressed his sympathies and offered support, he did so in a rather bizarre way. Notice the end of his statement:

I extend my deepest condolences to those so terribly injured ... and to the so many families of the victims. We stand in absolute solidarity with the people of the United Kingdom. Young, beautiful, innocent lives ... [taken] by evil losers.

Trump's statement seems respectful and similar to former presidents' responses to such tragedies. That is, until you read the last two words: "evil losers." On one hand, terrorism contains the root word "terror" for a reason. Terrorists' goal is to instill fear that death can strike where its least expected. It's why they attack concertgoers or public transportation systems or markets. These are all places most of us frequent without thinking twice. So, it could be argued that to beat terrorism, people must refuse to allow it to change the way they live their every day life. Well, calling terrorists "evil losers" certainly makes them seem less threatening. But Trump's terminology also neglects the fine balance that must be preserved to maintain respect for those whose lives terrorism undeniably destroys.

The families and friends who lost loved ones at Monday's Ariana Grande's concert are grieving. Calling the suspect responsible for those deaths an "evil loser," to a certain degree, delegitimizes that grief, as well as the fact that life is fragile and can be taken at the snap of your fingers. Sure, a terrorist might be an "evil loser," as Trump says, but that terrorist is still capable of destroying lives or being a murderer. Though I see what Trump might have been trying to accomplish here, it didn't work. Then again, maybe those words just came out of his mouth with little thought.

Aside from Trump's word usage, it's important to remember that although the Greater Manchester Police have said they believe a suicide bomber in responsible for the attack, authorities have not yet mentioned ISIS or any other terrorist network. However, British authorities have made it clear they are investigating the attack as terrorism until further notice convinces them otherwise. “The attacker, I can confirm, died at the arena," chief constable Ian Hopkins said. "We believe the attacker was carrying an improvised explosive device, which he detonated, causing this atrocity.” Maybe in the future, Trump will choose his words more carefully when dealing with such a tragedy.