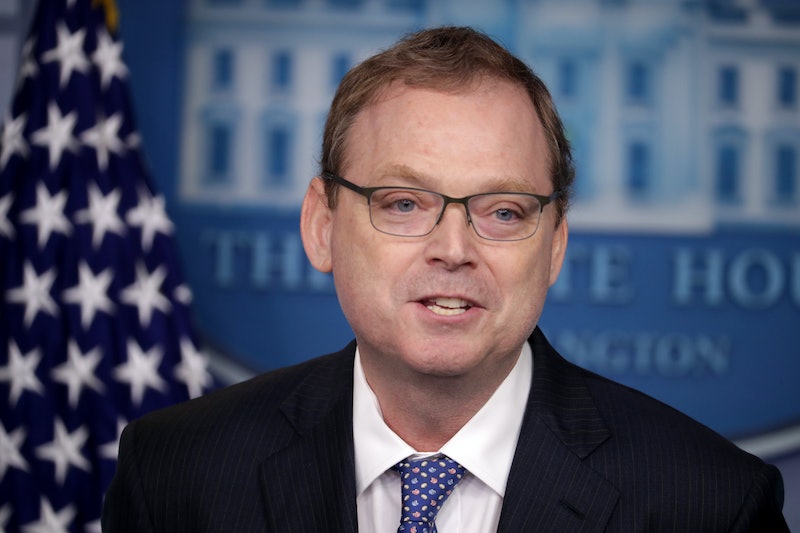 As the ongoing partial government shutdown moves into its fourth week, thousands of furloughed and unpaid federal employees across the country have reportedly been forced to seek assistance from unemployment benefits, crowdfunding campaigns, and food banks as they struggle to make ends meet without a paycheck. Yet, one Trump adviser has equated the shutdown to a vacation for furloughed federal employees, claiming they're "better off" because of it. But a number of folks disagree and have accused the Trump administration official of being heartless and out of touch.

"Huge share of government workers were going to take vacation days, say between Christmas and New Year's," White House economic adviser Kevin Hassett said in a recent interview with PBS' NewsHour. "And then we have a shutdown and so they can't go to work, and so then they have the vacation but they don't have to use their vacation days."

But Hassett took his evaluation of the shutdown's impact one step further, alleging that furloughed workers might be "better off" because of the shutdown. "Then they come back and then they get their back pay, then, in some sense, they're better off," he said.

Hassett's remarks kicked off a storm of criticism on social media from those who condemned the administration as reckless and out of touch. "That Kevin Hassett would be stupid enough to say this should shock no one," attorney and national security and federal employment litigation expert Bradley P. Moss tweeted.

Senate Minority Leader Chuck Schumer accused Hassett of being "out of touch" and dared him to repeat his claims "to the parents who need to pay their bills, pay off loans, feed their families" without a paycheck during the shutdown.

Another Twitter user called Hassett's remarks not only "insulting" to federal workers but "alarming" given that they come from an economist. "It's also just alarming that a top GOP economist like Kevin Hassett doesn't know what daily economic struggles are like for regular workers around the country," they wrote.

What's more, there's likely a number of furloughed and unpaid federal workers who'd disagree with Hassett's claim that they're "better off" and that the shutdown is a vacation without the vacation days. Workers like Mallory Lorge, who told NBC News she's having to ration the insulin she uses to treat her Type 1 diabetes as she can't afford her $300 copay without a paycheck coming in.

"I can't afford to go to the ER," Lorge told NBC News of an evening last week when her blood sugar rose too high. "I can't afford anything. I just went to bed and hoped I'd wake up."

Lorge also told the news outlet that she was taking a look at which of her personal possessions she could sell in order to pay her bills until the shutdown ended and she was allowed to return to work.

Lorge isn't the only furloughed federal worker struggling to pay bills during the shutdown. Last week, the Department of Labor reported that more than 4,500 federal employees had applied for unemployment benefits in the last week of December, as negotiations to end the shutdown stalled significantly.