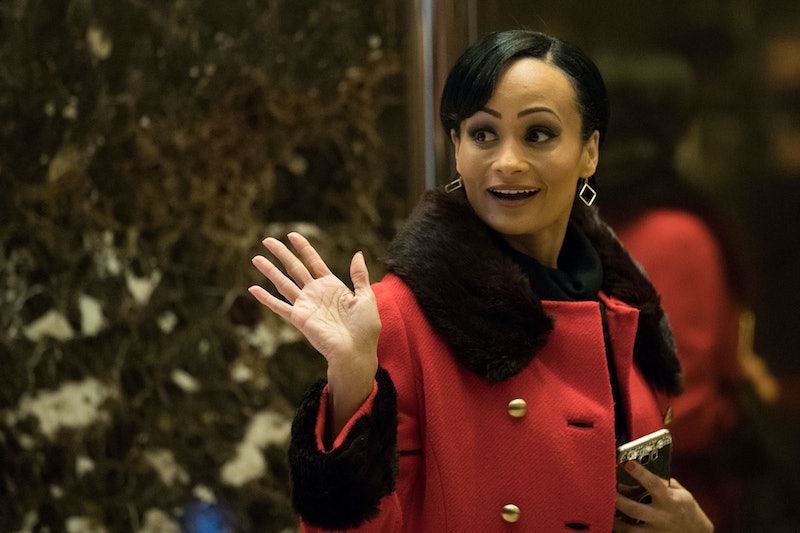 In an interview on MSNBC, a Trump 2020 campaign advisor deflected a question about diversity with an awkward answer about Lincoln's administration. Senior advisor for Donald Trump's 2020 campaign Katrina Pierson challenged a question regarding the president's lack of African American hires with her own question about the number of black people working in the Lincoln administration.

"I'm not going to participate in the attempt to make this all about race," Pierson said when asked by MSNBC host Rev. Al Sharpton to name the African Americans working in the West Wing of Trump's White House. "It's ridiculous. How many black people were in Abraham Lincoln's West Wing?"

Earlier in the interview, Sharpton had questioned the diversity of Trump's White House, arguing that he'd failed to maintain the historical precedence of employing "major figures of the black community" set by both Republican and Democratic presidents. "Who are the blacks in the West Wing under President Trump?" he asked.

"You mean those who took the job or those who were offered? Because those are two entirely different questions," Pierson, who is African American, shot back. She then claimed that she had been offered the job of White House press secretary before Sarah Huckabee Sanders.

When pressed by Sharpton to name names, Pierson refused. "I'm not going to participate in the attempts to continue to paint this president as racist," she said.

"There's plenty of black people working in the West Wing," Pierson said after Sharpton claimed her inability to name even one staffer was indicative of "a striking absence."

But diversity has been reported to be an issue in Trump's White House. In August, CNN found that black people made up exactly zero of Trump's senior White House officials. At the time, Omarosa Manigault Newman, who'd resigned eight months prior over Trump's handling of a violent white supremacist rally in Charlottesville, Virginia, was reported to be the only African-American to have ever served in a senior role. In fact, Vox has reported that Trump's Cabinet is "the whitest, most male-dominated group" seen in the White House since Ronald Regan's presidency.

Newman commented on the lack of diversity in Trump's White House in an August interview on NBC's Meet the Press, alleging that decisions were being made without the voices of African Americans. "I was the only African-American at the table," she said. "[Since] I left, there has been no new appointment of an African-American assistant to the president, which means that people are making decisions about us, without us."

What's more, this isn't the first time someone close to President Trump has found themselves unable to name even one black person working in a high-level position within the West Wing. In August, White House counselor Kellyanne Conway fumbled the question during an interview on ABC's This Week. Neither Housing and Urban Development Secretary Ben Carson nor Special Assistant to the President for Domestic Policy Ja'Ron Smith, both of whom Conway named, work in the West Wing.