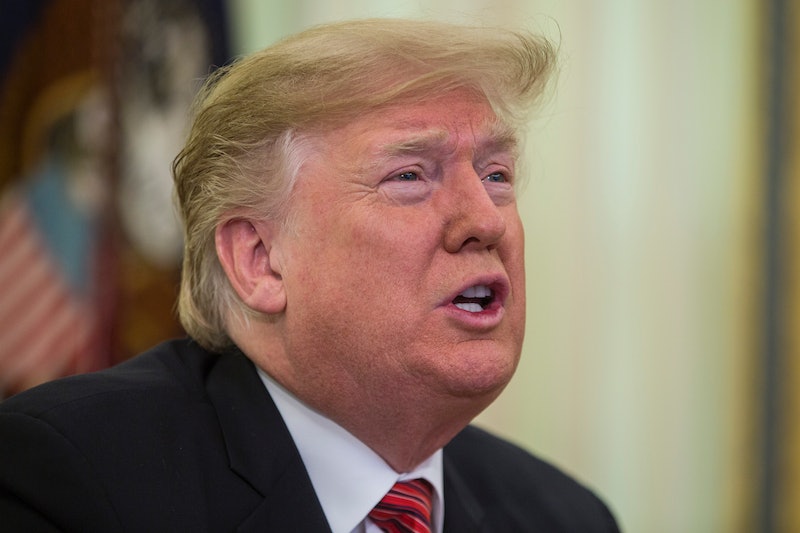 The late Sen. John McCain may be the most prominent person to question President Trump's Vietnam draft deferments — albeit implicitly — but he was not the first. Now, a report in The New York Times covers allegations from the family of the doctor who said he diagnosed Trump with bone spurs. The doctor's daughters say their dad allegedly faked it as a favor to Fred Trump, and that Trump avoided the Vietnam draft with the diagnosis.

The doctor in question, Dr. Larry Braunstein, died in 2007, but his daughters told the paper that he often told the story of how he helped Trump as a favor to his father. The elder Trump owned the Edgerton Apartments building in Jamaica, Queens, where Braunstein ran his podiatry office. Bustle has reached out to the White House for comment.

"I know it was a favor,” one daughter, Dr. Elysa Braunstein, told The New York Times. The paper approached the family based on an anonymous tip that it was a person who rented from Fred Trump who wrote the medical documentation for the deferment. Times reporters then tracked down the Braunsteins using old city directories and through interviews.

Braunstein's daughters claim their dad benefited in return. "What he got was access to Fred Trump," Elysa Braunstein told The Times. "If there was anything wrong in the building, my dad would call and Trump would take care of it immediately. That was the small favor that he got."

The elder Trump may have also given him a break on rent as a result. Another doctor, Dr. Alec Hochstein, who worked with Braunstein in the '90s, told The Times that Braunstein mentioned over dinner once that he didn't have to worry about rent increases. "He spoke very highly of the Trumps, and they were very open to negotiating with him and letting him stay in the space at a rent he was comfortable with," Hochstein told the paper.

No paper evidence was provided to The Times, and medical records were not saved with the country's draft documents in the National Archives. The family, though, said that another podiatrist, Dr. Manny Weinstein, was involved in the Trump draft deferment.

The Times was able to find that Weinstein, who died in 1995 and had no children, moved into a Fred Trump-owned apartment the year that Donald was given the medical deferment. He later moved into another Trump building.

Trump's feet have come up before, including in an interview with his biographer. Michael D’Antonio, who wrote the 2015 release Never Enough: Donald Trump and the Pursuit of Success, claims Trump took off a shoe to show bumps on his heel (which D’Antonio says he couldn't see) when he asked about the deferment.

"It would have been very difficult to march long distances," Trump said in the interview. "Very healthy, but in the back, in fact it is here. You can see it on both feet. I have spurs."

Trump has also claimed incorrectly that he benefited more from a high draft number — not the bone spurs. "I was going to the Wharton School of Finance, and I was watching as they did the draft numbers, and I got a very, very high number," Trump told Fox 5 New York in an interview in 2011.

But The Times, in an earlier report, showed that the lottery didn't start until December 1969. Trump graduated from Wharton in the spring of 1968, and he received his medical deferment that same fall.