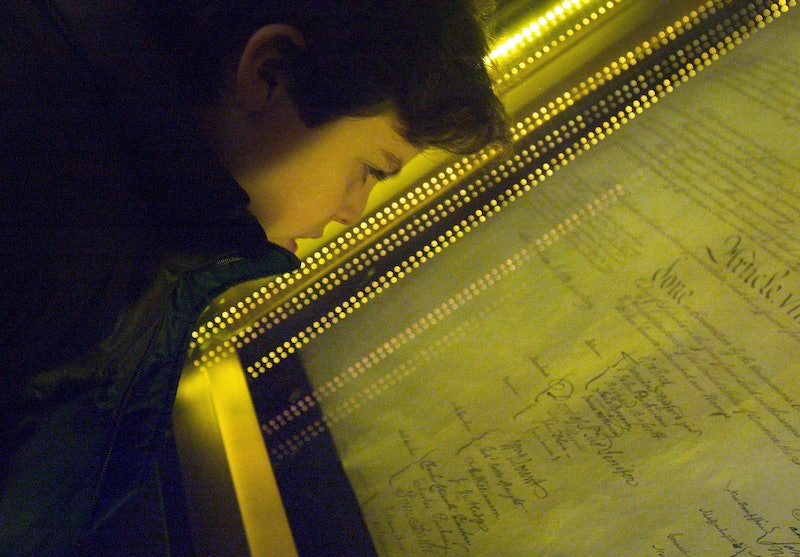 The revelations from Donald Trump's "First 100 Days" interview with Fox News just keep on coming. One of the more recent headlines regarding the interview centers on President Trump lamenting that checks and balances are "archaic," and the implications of those comments on the constitution are both scary and far-reaching.

Of the many controversial soundbites from Trump's Fox interview, his comments about the apparently "archaic" nature of many checks and balances on presidential power are among the most startling. From Congress' ability to override presidential vetoes to federal courts' power to declare laws (and presidential orders) unconstitutional, the separation of our branches of government and their ability to check each other are the cornerstones of American democracy, a system enshrined in the Constitution. Despite these fairly universally-approved systems, however, The Washington Post pointed out that Trump used the term "archaic" to describe his view on Congressional rules (and three other times in references to aspects of checks and balances):

His comments about the Senate were within the context of complaints about the slow-moving nature of Congress, but rather than understanding the pace of legislation, Trump overtly said that he wants to change the rules.

The systems of checks and balances Trump believes are "archaic" (a word he is clearly misusing — the country is only 241 years old, and the constitution is 229) are in place to deter the sort of authoritarianism many fear from this administration. Our checks and balances system was regularly deployed during Barack Obama's administration as Congressional Republicans accused the former president of "constitutional overreach" on so many occasions. Those same systems are necessary — and should be utilized more often today — to act as a check on Trump's allegedly authoritarian tendencies.

Evidence that Trump appears to be dissatisfied with his inability to consolidate power abound in the Fox News interview: after criticizing various "archaic" aspects of our system of governance, Trump made clear his opinion on one of the greatest tools available to check presidential power:

I think, you know, the filibuster concept is not a good concept to start off with.

As usual, Trump's supporters are likely to hear his multiple accusations of the so-called "archaic" aspects of American government and parrot them, potentially building up his foundation for any attacks he may make on the systems of checks and balances he appears to loathe. Our president, whose job is to uphold both the will of the people and the constitution, may have only just begun verbally attacking one of the primary foundations of our government — and what's worse, his many allies in Congress have not publicly addressed how concerning that is.

More like this
'The Capture' Is Finally Back – & S2 Looks Tense AF
By Sophie McEvoy and El Hunt
Christina Aguilera Took A Powerful Stand At Brighton Pride
By Sam Ramsden
Are John Legend & Kanye West Still Friends? The Singer’s Latest Update Is Candid
By Brad Witter
'Scream’s Courteney Cox Has Broken A Major Horror Record
By Sophie McEvoy
Get Even More From Bustle — Sign Up For The Newsletter