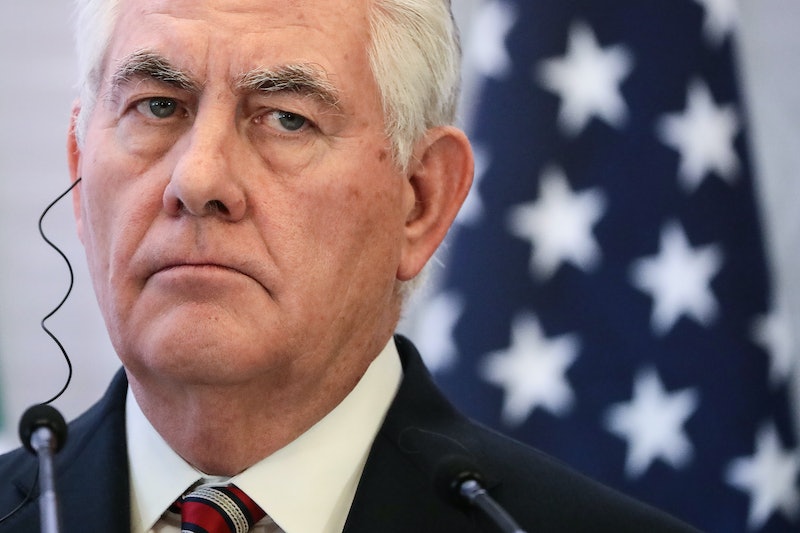 The latest shakeup in the Trump administration involves one of the government's highest positions. The Washington Post is now reporting that Trump has fired Rex Tillerson as Secretary of State after Tillerson broke with the White House about the news that Russia had allegedly poisoned an ex-spy and Russian citizen in the U.K.

"I want to thank Rex Tillerson for his service," Trump wrote in a statement to The Washington Post. "A great deal has been accomplished over the last fourteen months, and I wish him and his family well."

Trump and Tillerson repeatedly clashed over the short time that Tillerson served as the top American diplomat, and reports emerged in late November 2017 that the White House was planning to oust Tillerson. Trump did not explicitly deny those reports, saying at the time that "He's here. Rex is here," when asked if he was planning to fire the Secretary of State.

Trump's initial choice of Tillerson as Secretary of State raised eyebrows for several reasons. Most notable among those were the facts that Tillerson, the former CEO of Exxon/Mobil, had no experience in politics or diplomacy outside of his work as the CEO of an international company, and that he had worked closely with Russia in his previous life as a CEO and even received the Russian Order of Friendship award. Critics then quickly had material to jump on after Tillerson began his tenure, as he was very slow to fill key State Department positions and he suggested cutting the department's budget by a third. The New York Times reported that Tillerson felt offended by the reports that he was "hollowing out" the State Department, but hard data showed that foreign affairs officers and other high ranking foreign service officials had left the State Department in droves during Tillerson's time in the position.

While Trump and Tillerson never made it clear if their plans for the State Department actually did align, they publicly clashed both personally and on numerous foreign policy topics. Most famously, NBC News reported in early October that Tillerson had nearly resigned in the summer of 2017 before Vice President Mike Pence stepped in to prevent that, and that Tillerson had called Trump a "moron" in a meeting with other national security officials. Tillerson then held a press conference affirming his commitment to the position and his support for the president, but he did not explicitly deny that he had insulted Trump. Tillerson also made his disagreement with the president clear over Trump's equivocating response to the white supremacist rally in Charlottesville in August.

The two also publicly disagreed on the right course of action with North Korea, when Trump said in October that Tillerson was "wasting his time trying to negotiate with Little Rocket Man." He added a personal comment to the Secretary of State: "Save your energy Rex." More recently, however, Trump agreed to meet with North Korean leader Kim Jong Un — just after Tillerson said that diplomatic negotiations were still a long way away.

The Washington Post reported that Tillerson had not spoken to the president and was unaware of the exact reasoning behind his firing.

"The secretary did not speak to the president, and is unaware of the reason," said Steve Goldstein, undersecretary of public diplomacy for the State Department, in a statement as reported by the Post. "He is grateful for the opportunity to serve, and believes strongly that public service is a noble calling."