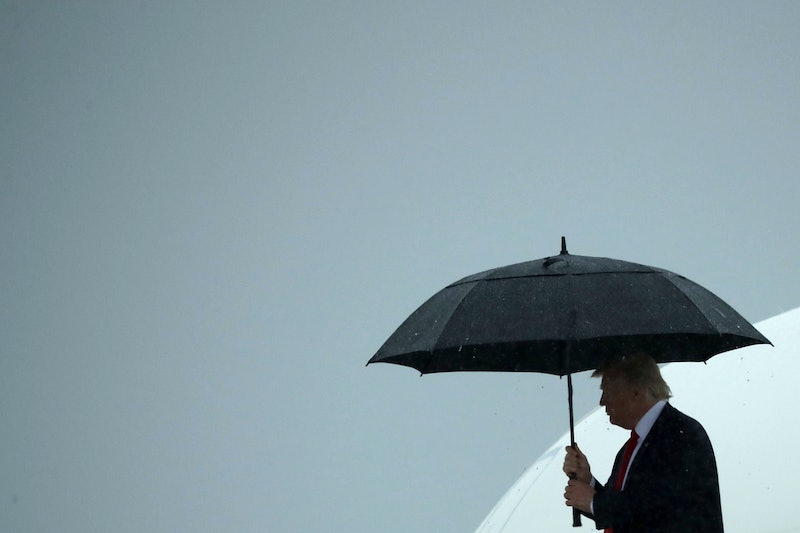 It's raining... Barack Obama? President Donald Trump may have skipped out on a visit to a U.S. military cemetery in an effort to avoid the rain but, boy, he sure stirred up a storm online. In response to news that Trump had begged off of an activity meant to honor fallen World War I soldiers on Saturday, a number of social media users showered Trump with pictures of Obama standing in the rain.

While other world leaders braved the rain to pay tribute to veterans at various sites outside of Paris on Saturday, Trump opted to stay in his hotel, citing "scheduling and logistical difficulties caused by the weather." Instead, The Washington Post reported Trump sent a delegation lead by Chief of Staff John Kelly to Aisne-Marne American Cemetery in his place. But Trump's rain check didn't sit well with many on Twitter.

In fact, a number of Twitter users rained a storm of pictures featuring Obama speaking at or attending events in wet weather down on Trump via the social media network. There were photos of Obama under umbrellas or sharing umbrellas with others and photos of him, shirt soaked through, delivering a speech in the rain sans umbrella.

It's not immediately clear why Trump may have felt the rain would make his visit impossible. In a statement released Saturday, the White House failed to go into detail but mentioned the weather had created difficulties with scheduling and logistics. "The President and First Lady's trip to Aisne-Marne American Cemetery and Memorial has been canceled due to scheduling and logistical difficulties caused by the weather," NBC News reported the White House wrote.

According to NBC News, the president was supposed to arrive at Aisne-Marne American Cemetery and Memorial in Belleau, France by helicopter and that the rainy weather likely grounded the rotorcraft. It was not clear why a motorcade could not have been arranged to take Trump and first lady Melania Trump to the cemetery.

While a number of people sent Trump photos of Obama working in the rain, others recalled the times Trump has appeared to golf in the rain. In October 2017, for example, the president played a round of golf with Sen. Lindsey Graham in conditions Graham described as being "wet and windy."

Others pointed out that former U.S. presidents and other world leaders have often braved the rain to give speeches at a variety of events. One Twitter user, for example, compared Trump's cancelation at Belleau to a speech Canadian Prime Minister Justin Trudeau gave in 2017 on the 75th anniversary of the Dieppe raid, calling it a "mic drop" moment.

"As we sit here in the rain, thinking how uncomfortable we must be these minutes as our suits get wet, and our hair gets wet," Trudeau said in that speech. "It's all the more fitting that we remember on that day in Dieppe the rain wasn't rain, it was bullets."

On Sunday, the White House reported that Trump attended an American commemoration ceremony at Suresnes American Cemetery in Suresnes, France.