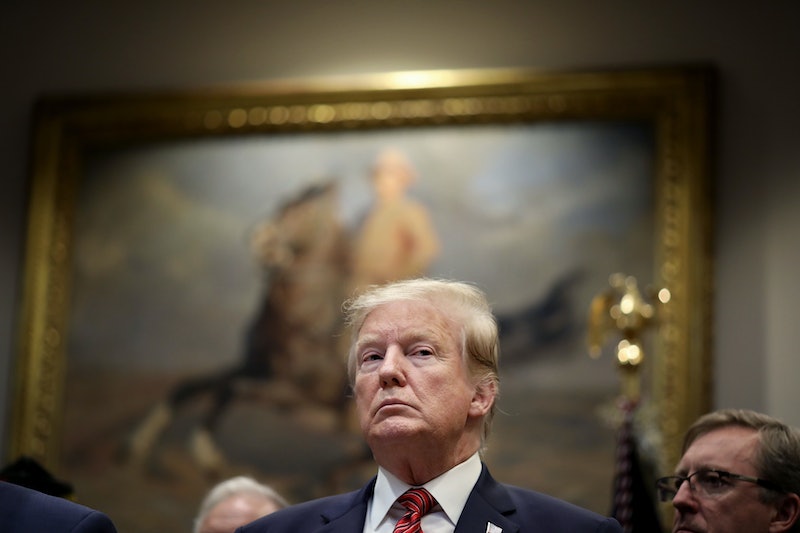 The president marked International Women's Day on Friday by issuing a special presidential message. But while the global holiday is traditionally known as a time for celebrating women's myriad of achievements and contributions while advocating for equality, Donald Trump's International Women's Day message focused largely on himself and his administration's achievements.

"On International Women's Day, we honor women worldwide for their vital role in shaping and strengthening our communities, families, governments, and businesses," Trump's message read. "We celebrate their vision, leadership, and courage, and we reaffirm our commitment to promoting equal opportunity for women everywhere."

But Trump's presidential message fell short of actually honoring or, indeed, even mentioning any specific woman's achievements. Instead, he touted what he called his administration's championing of "initiatives to promote women’s global economic empowerment through business, technology, and increased access to capital."

Among the initiatives Trump applauded in his message was the Women Entrepreneurs Finance Initiative, which seeks to promote and fund female entrepreneurs in developing countries. According to The Atlantic, the initiative has commonly become known as "the Ivanka Fund" due to the role Trump's daughter, Ivanka Trump, played in launching it. The president also highlighted the Overseas Private Investment Corporation’s 2X Women's Initiative, the United States Agency for International Development's WomenConnect Challenge, and the Canada–United States Council for Advancement of Women Entrepreneurs and Business Leaders as part of his administration's efforts to promote women's global economic empowerment.

The president also hailed his decision to launch the Women's Global Development and Prosperity (W-GDP) Initiative through a National Security Presidential Memorandum. He claimed the initiative was made to help "at least 50 million women in developing countries" participate fully and freely in their local economies by the year 2025 and argued that, "Women's participation in the workforce, free of discrimination and injustice, results in safer, stronger, and freer nations."

Trump then noted that his administration wasn't just working to champion women in other countries. "As my Administration continues to support women around the globe, it is also fighting for women in the United States," his presidential message read.

According to Trump, these efforts included passing the Tax Cuts and Jobs Act, which he claimed was "providing tax relief to parents" doubling the child tax credit available to them and preserving the child and dependent care credit. The president then credited his administration's economic policies with enabling women's unemployment in the United States to reach "the lowest level in 65 years."

But as Daniel Dale of The Toronto Star pointed out, that's an outdated statistic. Women's unemployment fell to 3.6 percent — it's lowest level since 1953 — in both May and September of 2018, according to data put out by the Bureau of Labor Statistics. It has since risen, hitting 3.9 percent in January and 3.8 percent in February.

What's more, while Trump promised his administration would "remain vigilant" in its "pursuit of equality," he has long been criticized for his rhetoric on women. Along with facing a series of sexual misconduct and assault allegations — all of which the White House has denied — Trump was once caught on tape bragging about using his power and fame to grab women by their genitals without their consent.