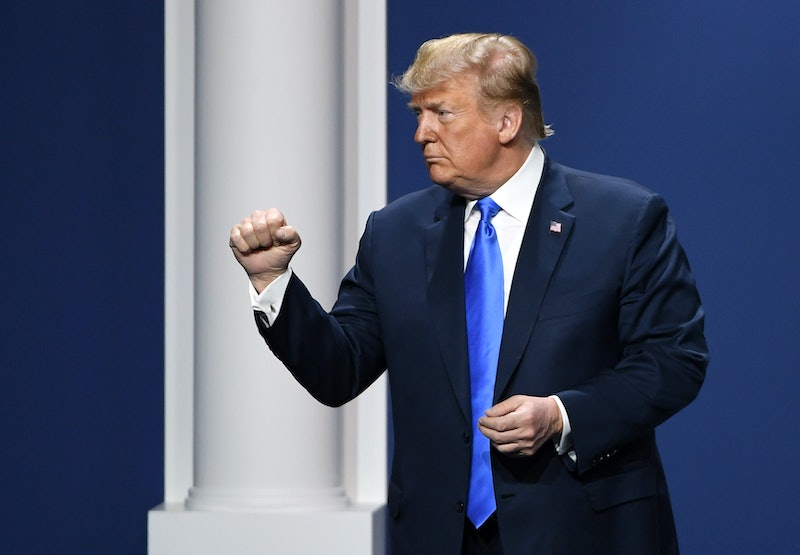 President Trump may have backed down from shutting the border with Mexico last week, but he isn't letting the migration issue go, either. The attacks on migrants and asylum seekers continued at the Republican Jewish Coalition in Las Vegas on Saturday, where Trump said asylum seekers are like UFC fighters.

Trump called the asylum process a "scam" and implied that many don't need to seek refuge in the United States from violence and persecution in their own country. "Some of the roughest people you’ve ever seen, people that look like they should be fighting for the UFC," Trump said, describing asylum seekers. Ultimate Fighting Championship is a company that puts on mixed martial arts fights around the world.

"They read a little page given by lawyers that are all over the place — you know lawyers, they tell them what to say," Trump continued. "You look at this guy, you say, wow, 'that’s a tough cookie.'"

Then the president pretended to be an asylum seeker, mocking them with a deep, monotone voice. "'I am very fearful for my life,'" he said. "'I am very worried that I will be accosted if I am sent back home.'"

"No, no. He’ll do the accosting," Trump said, responding as himself with a normal voice.

Trump also told the crowd some of the things he has done, including declaring a national emergency — at which point the Republican crowd cheered. He also explained his decision to block all development funds to the Northern Triangle countries where most migrants and asylum seekers headed to the United States are coming from.

"The Democrats say, 'how dare you do that, that money is used for all this good!'" Trump said. "But no it's not, it's largely stolen." The money was used to help eliminate the root causes of violence in the area, according to the State Department.

And the rhetoric from Friday, that "our country's full," was also repeated. "It’s a colossal surge and it’s overwhelming our immigration system, and we can’t let that happen," Trump had said while on a tour of a border area in Southern California. "I’m sorry, we’re full."

As for the border, Trump didn't say he would shut it. But he left open the possibility, saying that it would stem the flow of drugs to the country. Most drugs do actually enter the country through official border crossings, something he ignored while pushing for the wall.

Trump used strong language about the situation throughout his speech, promising to do "whatever is necessary" to stop asylum seekers and migrants from entering the country and calling them an "invasion." His UFC comment was just the tip of the iceberg.

More like this
The Most Powerful Photos From The Weekend’s Abortion Rights Protests
By Melanie Mignucci
How 5 People Upended Their Lives To Fight For Abortion Rights
By Hannah Smothers
Boris Johnson’s Leadership Is In Question – Again
By Bustle UK
17 Powerful Photos From March For Our Lives Protests Across The U.S.
By Michelle Toglia
Get Even More From Bustle — Sign Up For The Newsletter