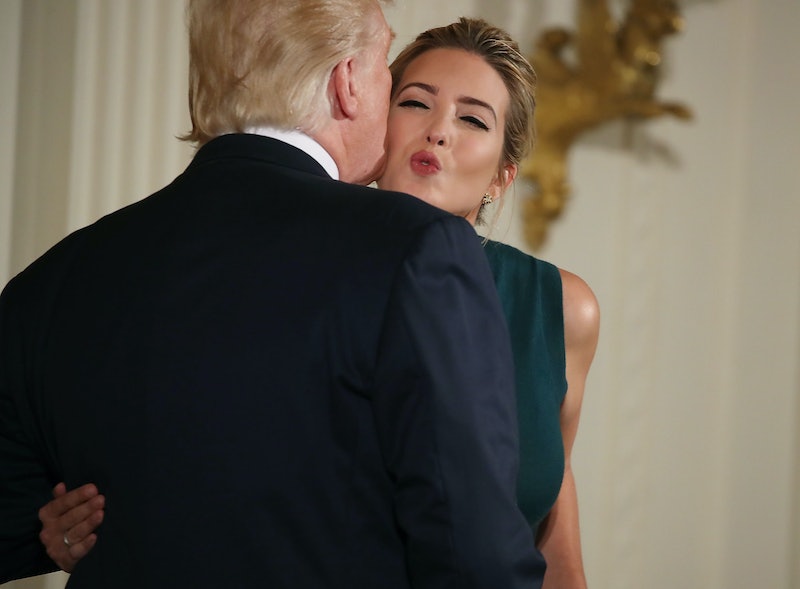 A lot has been written about the relationship President Donald Trump has with his daughter, Ivanka Trump. He's repeatedly gushed about her to the press, and it's clear he thinks pretty highly of her — he did, after all, name her one of his senior advisers. But the president apparently thinks his daughter is the right person for, well, a lot of jobs. In fact, according to a recent profile in The Atlantic, Trump even considered nominating Ivanka as World Bank president.

"I even thought of Ivanka for the World Bank," Trump told Elaina Plott of The Atlantic. "She would've been great at that because she's very good with numbers." Bustle has reached out to the White House for confirmation.

The president went on to say he thought his daughter exhibited "a tremendous presence when she walks into the room." He also credited Ivanka with having "a great calmness" — something she retains even when under pressure. "She reacts very well," Trump told the magazine, adding that trait was "usually a genetic thing."

But World Bank head isn't the only role Trump has reportedly thought his daughter would do well in. According to Plott, Ivanka is often among the first candidates to come to Trump's mind when a position opens up within his administration. "She's a natural diplomat," Trump said, per The Atlantic. "She would've been great at the United Nations, as an example."

Of course, despite dropping a few hints about how "incredible" he thought she'd be in the role on Twitter, Trump ultimately didn't name his daughter as then-U.S. Ambassador to the United Nations Nikki Haley's replacement last fall. "If I did, they'd say nepotism, when it would've had nothing to do with nepotism," he told Plott. "But she would've been incredible."

At the time, a Treasury Department spokesperson declined to comment to The Financial Times on whether Ivanka was in the running for the job, saying only that the institution had received "a significant number of recommendations for good candidates." In the end, Trump opted to nominate David Malpass, then the Treasury Department's under secretary of international affairs, to the head the World Bank. According to Time magazine, Malpass was unanimously elected to a five-year term in early April by the World Bank's executive board.

But the president reportedly thinks Ivanka may be suited to more than just positions within his administration. In fact, according to Trump, Ivanka may be the child best able to follow in his political footsteps. "If she ever wanted to run for president, I think she'd be very, very hard to beat," Trump told Plott, noting that Ivanka has so far not expressed a desire to run for president.