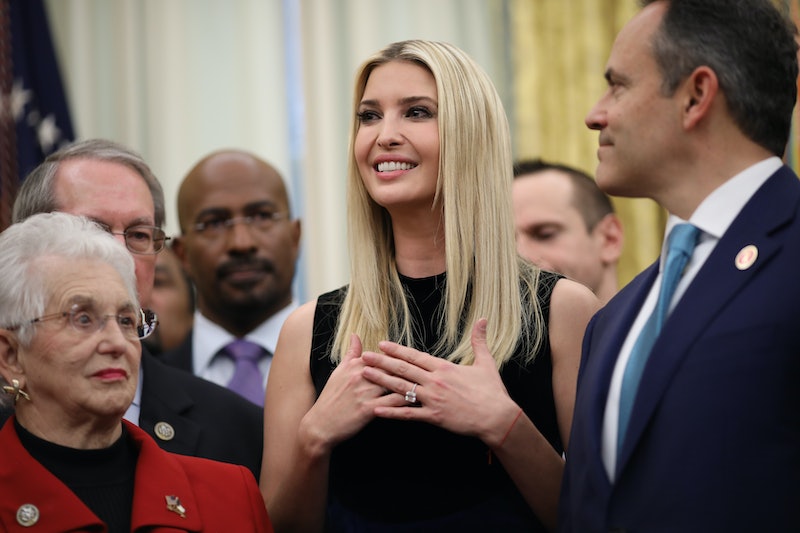 News that World Bank head Jim Yong Kim would leave the institution earlier than initially planned in order to take a job at a Wall Street firm has launched a flurry of speculation over who will be named to take over. Among the names reportedly being tossed around to replace the outgoing Kim is that of someone very close to President Donald Trump. According to the Financial Times, Ivanka Trump is being considered as World Bank head.

A number of names have already been tossed about in the days following Kim's surprise announcement of his impending departure, the Financial Times has reported. But perhaps the most surprising of those names was that of the president's eldest daughter and senior adviser. According to the financial news outlet, Ivanka's name is one of at least four currently "floating around Washington" as potential replacements for Kim.

In a statement to the Financial Times, a spokesperson from the Treasury Department declined to comment on whether Ivanka was in the running for the job. Instead they said only that the institution had received "a significant number of recommendations for good candidates" and was "beginning the internal review process."

While Ivanka's previous experience heading her own fashion brand, exploring the world of reality television beside her father, and serving as executive vice president of the Trump Organization has made her a rather surprising candidate, she isn't a complete stranger to those at the World Bank. In 2017, the World Bank announced plans to launch the Women Entrepreneurs Finance Initiative, a fund developed to finance female entrepreneurs around the globe that was heavily championed by Ivanka.

Around the time of its launch, Ivanka's involvement in the fund was reportedly so heavy that the Women Entrepreneurs Finance Initiative quickly earned the nickname the "Ivanka Fund," according to the Atlantic. What's more, The New York Times has claimed that Ivanka and World Bank head Kim had developed "a close working relationship" in 2017.

Some months prior to the launch of the World Bank's Women Entrepreneurs Finance Initiative, Ivanka took to her official Facebook page to publicly thank Kim for his "ongoing leadership in support of women's economic empowerment" as well as his participation in "a meaningful discussion" she'd had "with Saudi Arabian women entrepreneurs and elected officials."

But this isn't the first time reports have surfaced claiming that Ivanka might be headed toward a new gig. In October, the president's daughter was quick to deny reports that claimed she was reported to be in the running to replace Haley as U.S. ambassador to the United Nations. "It is an honor to serve in the White House alongside so many great colleagues and I know that the President will nominate a formidable replacement for Ambassador Haley," she tweeted. "That replacement will not be me."

Ivanka has not yet commented of reports that she's being considered to head the World Bank.