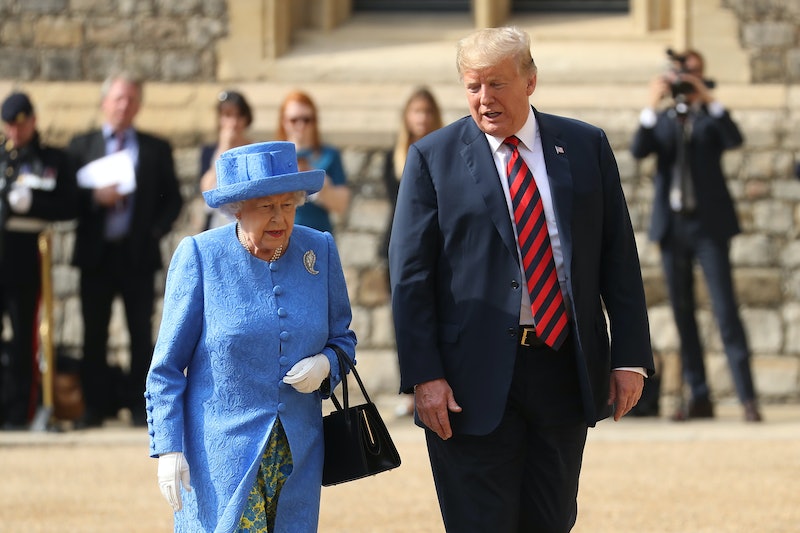 Queen Elizabeth II was left to greet the president and first lady of the United States alone on Friday at Windsor Castle after both Prince Charles and Prince William refused to meet Donald Trump, according to a report in The Sunday Times of London. The two men were reportedly quite upfront about their unwillingness to mingle with the president during his visit to the United Kingdom when informal talks about the trip first cropped up. The paper characterized the pair's refusal as a "snub" of the U.S. president by the royal family.

"This business of Prince Charles and Prince William not being there for the Trump visit was a snub," an insider told the Times. "They simply refused to attend. It's a very, very unusual thing for the queen to be there on her own. Usually she is accompanied by somebody."

Trump and First Lady Melania Trump capped off the official portion of their visit to the United Kingdom on Friday by joining the queen for tea at Windsor Castle. Their time at Windsor lasted just under an hour and included a short inspection with the queen of the Guard of Honour. But according to the Daily Mail, Prince Charles and Prince William may not have been the only members of the Royal Family who were less than keen on hosting Trump. A Whitehall official involved in planning the president's visit told the paper that even the Trumps' time with the queen was "kept to the bare minimum."

After arriving on the Windsor Castle grounds via helicopter, Trump and Melania were whisked to Windsor's Quadrangle by car, where they met the queen at the dais at roughly 5 p.m. local time. Although it's unclear if the Trumps were late to their meeting with Queen Elizabeth, she was at one point caught checking her watch while standing, alone, on the dais waiting for the president and the fist lady to arrive.

After shaking hands with the queen, Trump and Melania stood solemnly with their hands placed over their hearts as the Coldstream Guard of Honour band played the U.S. national anthem. The queen, stood respectfully between them with her hands clasped in front of her. The president and the queen then stepped down from the dais to inspect some of the troops that comprise the Guard of Honour and observe them march, something Sky News said a visiting foreign leader would have traditionally done with Prince Philip, who was also not present.

In 2016, Prince Philip not only joined the queen to greet former President Barack Obama and then-First Lady Michelle, but also personally drove them around the grounds of Windsor Castle. Although the queen's 97-year-old husband officially retired from his public duties last year, he has on occasion appeared with the queen at public events since then. It's unclear, however, if his absence on Friday stemmed from an unwillingness to meet President Trump.

According to the Daily Mail, Prince Charles has been seen accompanying the queen at various official and public events more and more since Prince Philip's retirement. "He goes to what he wants to go to, and if he had wanted to be there he could have been," a source told the paper about Prince Charles' absence at Windsor on Friday. President Trump and Prince Charles' differing views on climate change — Trump has called climate change a hoax while Prince Charles is a vocal environmentalist — has reportedly caused some tension when the idea of a potential meeting between the two men was first raised in the past.

Although a Whitehall official told the Times that members of the royal family "were not as enthusiastic" about Trump's visit "as they were when Obama came over," Downing Street has maintained Friday's tea with the Trumps "was always going to be just the queen."