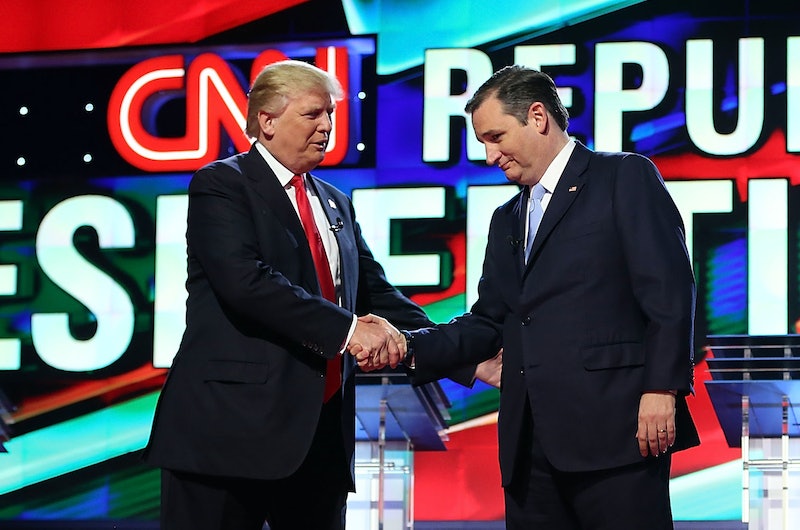 Donald Trump is no stranger to insulting members of his own political party. In fact, in 2016, one of the main targets of Trump's mockery was Sen. Ted Cruz. Trump's nickname for the Texas senator now, however, has changed, according to The Hill. On Monday, Trump told the press at the White House, "He’s not Lyin’ Ted anymore. He’s Beautiful Ted. I call him Texas Ted."

The president's remarks came shortly before he headed to Houston, Texas, where he will speak at a campaign rally for Cruz. The Texas senator will face off against Democratic candidate Beto O'Rourke, who has raised a whopping $38 million from over 800,000 contributions in the third quarter of the year, on Nov. 6. Seemingly unimpressed with O'Rourke, Trump said, "I think Beto O'Rourke is highly overrated. When I heard about him, I thought he must be something special — he's not."

The president's comments regarding Cruz strike a far different tone from his jabs at the Texas senator during the presidential election. For instance, in 2016, Trump said that Cruz was "worse than Hillary Clinton" at a rally in Norwalk, Iowa. That same year, Trump also questioned Cruz's honesty and tweeted, "How can Ted Cruz be an evangelical Christian when he lies so much and is so dishonest?"

The "Lyin' Ted" nickname came amid that bitter Republican presidential primary. A political advertisement uploaded to Facebook by PAC Make America Awesome in March 2016, with no apparent connection to Cruz, showed Melania Trump posing nude. At the time, Trump tweeted, "Lyin' Ted Cruz just used a picture of Melania from a G.Q. shoot in his ad. Be careful, Lyin' Ted, or I will spill the beans on your wife!"

In response, Cruz disputed Trump's accusation and said, "Pic of your wife not from us. Donald, if you try to attack Heidi, you're more of a coward than I thought. #classless"

Doing a reversal on Monday, Trump showered Cruz with praise. "Ted Cruz and I had a very, very nasty and tough campaign," Trump said. "It was a very tough campaign. ... By the way, very late into the campaign, people were shocked. ... Ultimately what happened, we voted out.

"The outcome was obvious," Trump told reporters. "And we have worked together very closely. ... I like him a lot. ... He's a very smart guy, he loves the people of Texas, which I do."

Some people may find it hard to believe the president and Cruz have come together this way. In the past, after all, Cruz described Trump as "consistently disgraceful." The Republican also once said, "Nominating Donald Trump would be a train wreck. It would be handing the White House over to Hillary Clinton." In another example, Cruz tweeted, "This race is simple. Donald Trump and Hillary Clinton are both big government liberals." And those are just a few of Cruz's insults for Trump.

But it seems like both Republicans have put past differences aside and teamed up to face O'Rourke — the Democrat who's won hearts all over the Lone Star State.