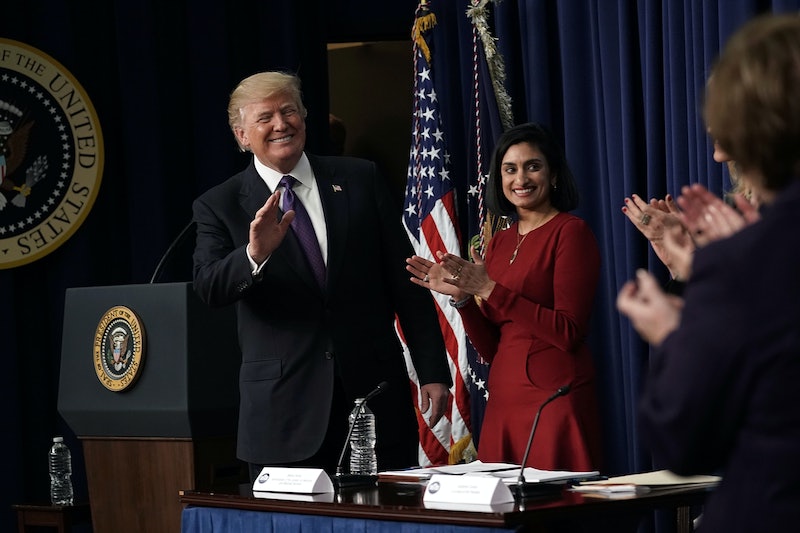 Less than two weeks before delivering his first State of the Union address, Donald Trump made a surprise appearance at a White House gathering with over 200 women from across the country. Although he was not slated to attend the "Conversation with the Women of America," he decided to make an appearance — and during his time there, Trump criticized Hillary Clinton.

Trump claimed that if Clinton had won the November 2016 election, the stock market "would have gone down 50 percent from where it was." He did not attempt to justify this figure, but instead told the women assembled at the event to remember that the market was "stagnant" and "going down" by the time he took office. Trump also took some time to gloat about beating Clinton in Arkansas, where she once served as First Lady.

"Arkansas, great state," Trump said. "How did I win Arkansas by so much when she came from Arkansas?"

The event had a focus on national security, the economy, and health care — especially regarding the opioid crisis. Deputy Press Secretary Lindsay Walters told reporters that the women attending the event were there to meet with Trump administration officials in order to discuss "what has been accomplished to date to advance women at home and in the workplace." Trump told the crowd gathered at the event that he "ran across the street" when he heard the gathering was taking place.

Trump's appearance at the "Conversation with the Women of America" event comes amid a global discussion of sexual assault. The #MeToo movement, which resurfaced in the wake of the Harvey Weinstein scandal after first being launched by Tarana Burke a decade ago, has created space for survivors in a number of different industries to share their experiences with sexual violence.

Nearly 20 women have come forward to make sexual misconduct allegations against Trump; he has denied all of them. However, Congressional Democrats are nonetheless bringing the #MeToo movement to Capitol Hill by inviting survivors of sexual assault to attend Trump's first-ever SOTU address.

The #MeToo movement was not a focus of the Women of America event, however, and Trump did not comment on or reference it. Instead, there was a panel for "women from various backgrounds and experiences" to "speak with high-level women within the Trump administration." According to CNN, these women included Ivanka Trump, Kellyanne Conway, White House press secretary Sarah Huckabee Sanders, DHS Secretary Kirstjen Nielsen, White House communications director Hope Hicks, and Secretary of Transportation Elaine Chao.

Trump appears to have deviated from the event's focus by bragging about his victory over Clinton, but Clinton herself has also recently expressed her own criticism of the president. The former Secretary of State has not kept how she feels about the current administration a secret. Shortly after Trump reportedly described Haiti and African nations as "sh*thole countries," Clinton denounced as views as ignorant and racist.

In addition to slamming Clinton, Trump also discussed the economy and immigration policy with the women present at the gathering. Last week, Trump held a bipartisan meeting on immigration in which he appeared to waffle between many different positions. But during Tuesday's gathering, Trump blamed Democrats for failing to reach a deal that satisfied both parties.

We're working on immigration and immigration reform, and hopefully at some point we'll be able to solve that problem. If the Democrats really wanted to, they could, but they really sometimes don't want to. But we're working on it and we'll get it done one way or the other, I hope.

The possibility of a government shutdown is looming; with just a few days remaining before government funding runs out, Democrats and Republicans have been unable to reach an agreement on the Deferred Action for Childhood Arrivals program. Despite bringing the subject up at the event, Trump did not seem overly concerned. Instead, he spent most of his eight-minute speech touting the "tremendous amount of progress" he said his administration has made.