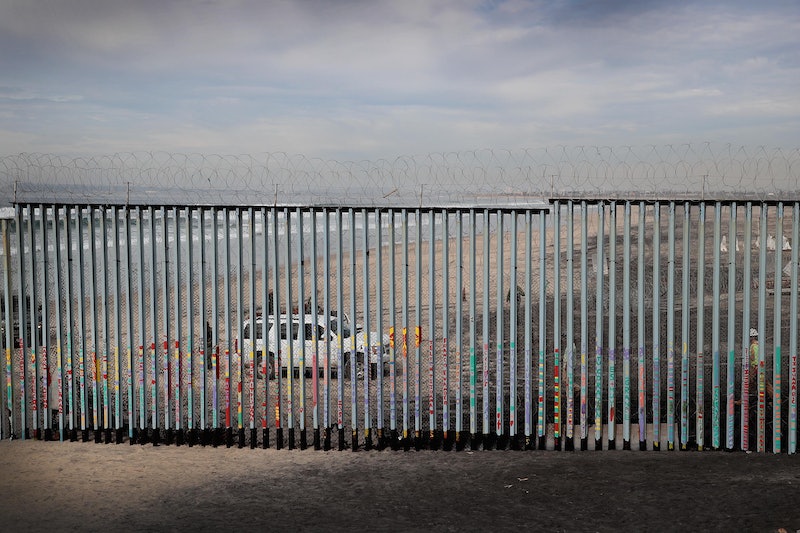 Before he delivered his State of the Union address on Feb. 5, President Donald Trump vowed for the umpteenth time that he would have his border wall between the U.S. and Mexico, even if it meant building a "human wall." On Saturday, some of Trump's supporters took his words to their hearts and attempted to make a "human wall" as part of a demonstration in support of his border wall, according to The Washington Post.

The publication reported that dozens of Trump followers stood between between El Paso, Texas, and Ciudad Juarez, Mexico, carrying and waving American and Confederate flags. Some wore "Make America Great Again" hats while others brought along signs that read "Stop the drugs that destroy our youth!" and "Stop child trafficking!"

The Post uploaded a photo taken by Reuters photojournalist Jose Luis Gonzalez, in which a Trump supporter held a Texas flag depicting an assault rifle and the words: "Come and take it." Supporters created the apparent "human wall" just two days before Trump is scheduled to hold a rally in El Paso on Monday evening.

The way the protest played out on Saturday may not come as a total surprise. Just hours before he gave his SOTU address, Trump tweeted, "Tremendous numbers of people are coming up through Mexico in the hopes of flooding our Southern Border. We have sent additional military. We will build a Human Wall if necessary. If we had a real Wall, this would be a non-event!"

During his SOTU speech, Trump made an unsubstantiated claim about El Paso's crime rate. "The border city of El Paso, Texas, used to have extremely high rates of violent crime — one of the highest in the country, and considered one of our nation’s most dangerous cities," Trump said in his address. "Now, with a powerful barrier in place, El Paso is one of our safest cities."

But The El Paso Times reviewed both FBI and El Paso law enforcement data and showed that El Paso's crime rate actually fell before the border construction began. Between 1993 and 2006, the city's crime rate decreased by 34 percent, according to the publication's analysis. The reviewed data showed that crime went up by 17 percent between 2006 and 2011. For what it's worth, border construction in the city began in 2008 and wrapped up in 2009.

While dozens of Trump's supporters have taken the president's words about a "human wall" to heart, some lawmakers have criticized Trump for misleading his audience about El Paso. One of them, Democratic Rep. Veronica Escobar, who represents El Paso, asked Trump to apologize for his false claims about the city in his SOTU speech.

In her letter to the president, Escobar wrote, "These distortions about our vibrant community are harmful to our reputation and degrade our spirit."

"I urge you to treat this visit as your opportunity not only to correct the record and ensure that the misinformation you stated on the national stage is retracted," Escobar added, "but also an opportunity to apologize to El Pasoans for the disparagement of our community."