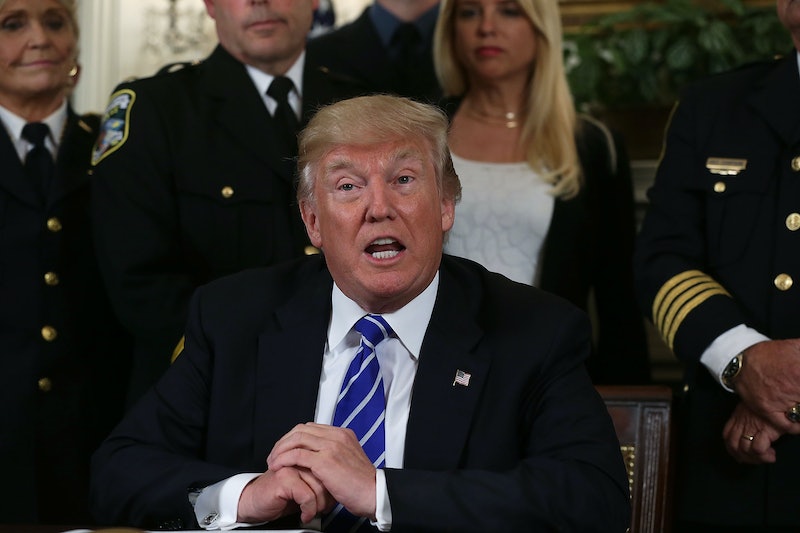 June is Pride Month, but unlike his predecessor, President Trump didn't issue a proclamation to honor the occasion. He did bestow several other official distinctions upon the fifth month of 2017, proclaiming June to be National Homeowners Month, National Ocean Month, African-American Appreciation Month, Great Outdoors Month and National Caribbean-American Heritage month. But Trump didn't acknowledge LGBTQ pride month, and given his abysmal record on gay rights, that's not the slightest bit shocking.

Despite claiming to be "the friend of women and the LGBT community," waving a pride flag at a rally once and uttering the phrase "LGBTQ" during his acceptance speech at the Republican National Convention, Trump hasn't enacted any pro-LGBTQ policies during his time as president. In fact, he's taken several steps to roll back federal protections for LGBT Americans.

In February, Trump withdrew a crucial directive from the Obama administration intended to protect the bathroom rights of trans students in public schools, and rescinded a 2014 executive order that banned LGBTQ discrimination amongst federal contractors. In addition, his administration won't include questions about sexual orientation or gender identity in federal demographic surveys, which could have a disastrous longterm effect on efforts to expand LGBTQ rights, and he's appointed several virulently anti-gay politicians to powerful posts in his administration.

For a while, there was hope amongst some that Trump's daughter Ivanka would be a voice for LGBTQ rights in the administration. But to date, there's no evidence that she's affected any change on that front. Unlike her father, she did tweet in recognition of pride month; however, many LGBTQ activists criticized her for doing so, citing the lack of substantive steps she's taken to advance LGBTQ rights from her post as an assistant to the president.

To be sure, proclamations are mostly symbolic gestures, and the Trump administration's refusal to honor Pride Month isn't going to affect federal policy in any way. But given how many times Trump has actually enacted LGBTQ policies, it's difficult not to see this latest snub in that context. It's sad, but it's not a surprise.