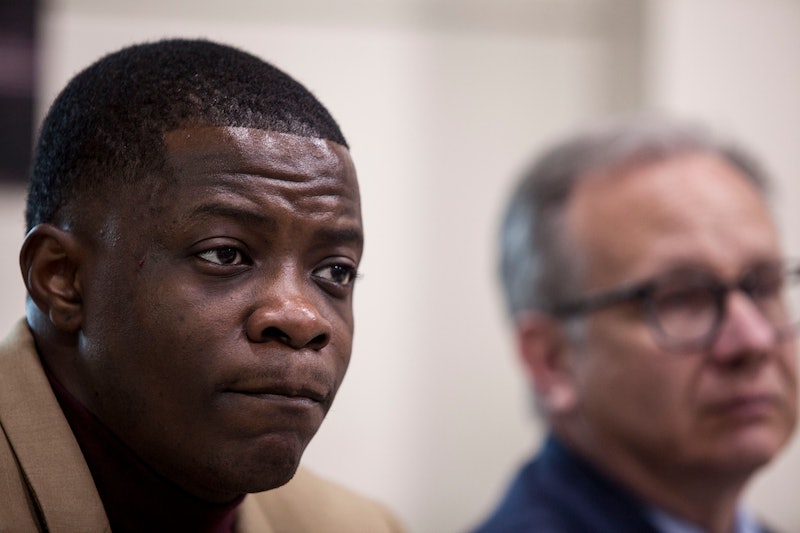 James Shaw Jr. saved numerous lives when he tackled a shooter at a Waffle House in April, but he's not taking on the mantle of a hero. Plenty of other people have pinned that label onto him — but one notable person apparently has not. Speaking with CNN's Van Jones on The Van Jones Show, the Waffle House hero said Donald Trump hasn't contacted him — but it doesn't seem to be bothering him.

"You touched the whole world, all you have to say is 'Waffle House hero,' everybody knows who you are," Jones said to a smiling Shaw. "Have you heard yet from President Trump?"

"At this time, I haven't heard anything," Shaw told Jones, shaking his head. "But that's not to say he didn't try to contact me, or not." Bustle has reached out to the White House for comment on this story.

Jones attempted to push the issue. "He gave a shoutout to Kanye ... no shoutout to you," Jones said. "How do you feel when the president of the United States misses an opportunity to hold up somebody who's trying to do good stuff?"

"I know he has a busy agenda, a busy schedule," Shaw responded. "Maybe he just hasn't got around to me, maybe my time is coming. It's not for me to judge really what he does. I did what I did, and I didn't really do it for recognition, I did it just to save my life."

In the interview, Shaw echoed what he had previously said about his heroic actions. Soon after the shooting, he told The New York Times that he was "just trying to live."

“I know I saved other people," he told The Times. "I have a 4-year-old daughter: I didn’t even think about her. In the midst of it, I was just trying to save myself.”

None of his many admirers across the country seem to see it the same way as he does, however. In early May, he went on The Ellen DeGeneres Show, and she surprised Shaw with a special visitor. He got to meet his idol, basketball star Dwayne Wade, who told Shaw, "I know you don't want to be called a hero, but I look at you as an American hero."

"When I sit down with my kids, and I sit down and talk to them about role models, who I want them to look up to, I would tell them to go look up James Shaw Jr.," Wade said, eliciting an appreciative "Wow" from Shaw.

Shaw also went on Steve Harvey's show, The Tennessean reported, and Harvey had another couple of surprises to add to the meeting with Wade and the sizable donations that Wade and DeGeneres made to the GoFundMe that had been set up for Shaw and his daughter, Brooklyn. Harvey brought a fellow Waffle House shooting survivor, Kayla Shaw (the two are unrelated), onto the show, and she was able to tell him in person how much his act meant to her.

"To you, what you did was not heroic, but to me, it was a difference between life and death," Kayla said. "Because of you, I got to go home and be a parent to my 5-month-old. And I am so thankful."

The Tennessean also reported that Harvey surprised Shaw with a first-class trip for him and his daughter to go to Barbados. "Thanks to his fearlessness and courage, James was able to help put an end to the nightmare for those who were there," Harvey said on his show.

The only recognition that Shaw has received from the White House, though, took the form of a tweet from Vice President Mike Pence calling him "an American HERO." At the beginning of May, the White House press secretary told press corps members that Shaw might get an invitation to the White House — but according to what Shaw told Van Jones, that invitation has not come yet.