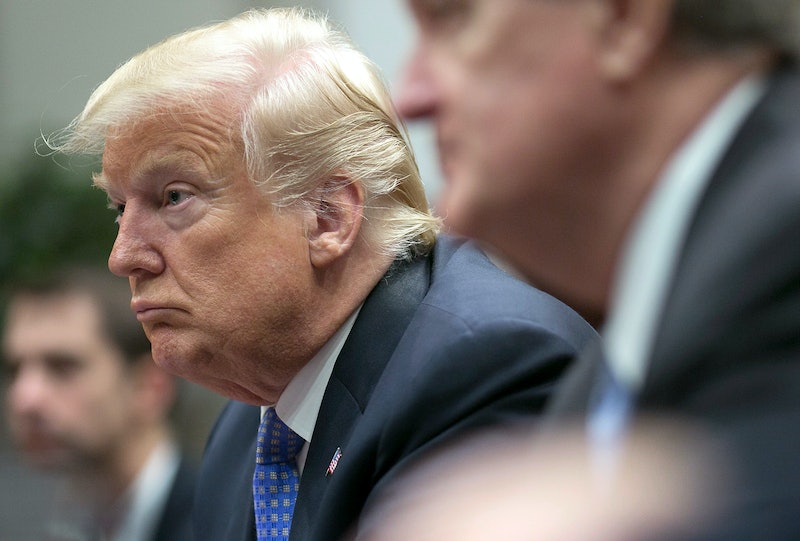 One glaring pattern to have emerged in the Trump era is that the president's tweets make news on a weekly — or even daily — basis. However, sometimes the topics President Donald Trump chooses not to tweet about are even more noteworthy. This was the case when Trump didn't tweet about the Jacksonville shooting at all — and instead made up an inflated approval rating for himself on Twitter, among other things.

On Sunday afternoon, Aug. 27, the Jacksonville Sheriff's Office tweeted a warning to its followers about the shooting, warning them to stay away. Two men were fatally shot on Sunday at the Madden 19 Tournament, and many others were wounded, according to CNN. In the time since then, most of the media immediately jumped onto the story, and Twitter was inundated with expressions of solidarity and calls for gun violence prevention. The Parkland survivors asked their peers to make change at the ballot box, and even Ivanka Trump offered her sympathy (which, as Yahoo New noted, was roundly met with criticism for her failure to effect change on the issue of gun safety).

In the hours after the shooting, though, President Trump didn't bring it up at all on Twitter — but he did tweet several times. Each missive that he sent out boosted his own image, and none of them expressed any sympathy or solidarity — not even a vague mention of "thoughts and prayers."

Trump's first tweet came on Sunday after the shooting, when he quoted a Washington Times article talking about how the "economy is booming" during his administration and he doesn't get enough credit for it. His second tweet came late on Sunday night, and the fact that it ignored the shooting wasn't the only problem — it also seemed to completely fabricate favorable poll numbers.

"Over 90% approval rating for your all time favorite (I hope) President within the Republican Party and 52% overall," he wrote. "This despite all of the made up stories by the Fake News Media trying endlessly to make me look as bad and evil as possible. Look at the real villains please!"

News organizations struggling to decipher that tweet, though, have failed to find the poll Trump was referring to, as The Hill noted. A poll conducted by The Wall Street Journal and NBC News did find some similar numbers — except 52 percent of voters disapproved of the president, unlike what he said.

Trump's next tweet, which came on Monday morning, thanked football legend Jim Brown for his support and repeated the claim that "African-American unemployment has reached the lowest level in history." His next tweet, an hour later, somewhat mysteriously praised golfer Tiger Woods. However, it makes sense once you know that Woods, when an interviewer gave him the chance to take a stand against the president, instead elected not to do so.

"We all must respect the office," Woods said after finishing a golf tournament, as Yahoo News reported.

Only minutes after that, Trump tweeted again — but instead of mentioning the shooting, he wrote, "A big deal looking good with Mexico!" This is apparently in reference to the reports that Mexico and the United States have reached an agreement about how to change NAFTA. This could end up being good news — but it's not the expression of sympathy that the families of the victims in Jacksonville have gotten from myriad other sources.