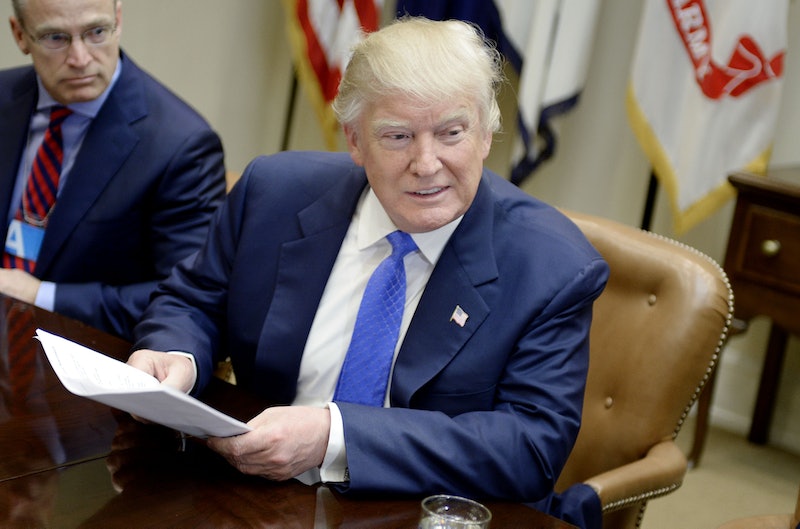 When Barack Obama was president, he directed public schools to allow transgender students access to whichever bathroom with which they identified. On Wednesday, the Trump administration reversed that order, thus eliminating one of the few federal protections for trans Americans. It was a cruel and vindictive decision — Trump is no better than students who bully transgender students around the world.

At Obama's behest, the Department of Justice sent a letter to public schools in May 2016 informing them that if they didn't allow transgender students to use the bathrooms of their choice, they wouldn't be eligible for federal funding under Title IX. That's the part of the 1972 Education Amendments Act that prohibits discrimination in public school "on the basis of sex." That directive was the center of a court battle, as several states had sued to block its implementation.

But on Wednesday, Attorney General Jeff Sessions and Education Secretary Betsy DeVos rescinded the Obama directive in its entirety. In a jointly-signed letter, the two agency chiefs told public schools that they aren't required to offer trans students access to restrooms that conform with their gender identity, adding that "there must be due regard for the primary role of the States and local school districts in establishing education policy."

This is basically a 180 degree reversal for Trump, who depicted himself as an ally of LGBTQ Americans both during and after his campaign. In his convention speech in July, Trump pledged to "do everything in my power to protect our LGBTQ citizens," and in January, the White House claimed that Trump was "determined to protect the rights of all Americans, including the LGBTQ community."

Making matters worse, the estimated 1.4 million transgender Americans are amongst the most vulnerable and marginalized groups in America: According to a 2011 survey, around 20 percent of trans Americans are homeless, 41 percent have attempted suicide (roughly 40 times the national average), and most pertinently, 61 percent reported experiencing "considerable abuse" at school due to their gender identity.

In other words: If there's any group of people who could desperately use protection from discrimination, it's trans children. The Trump administration has decided to revoke one of the few federal protections for trans Americans that existed, violating both the White House's past statements on trans rights and basic, common decency.

According to the New York Times, DeVos initially refused to sign off on the change, and expressed concern that it could cause harm to transgender children. But reportedly, she dropped her objections after Trump told her not to oppose it, and signed the letter authorizing the change. To say the least, this doesn't reflect well on the administration.