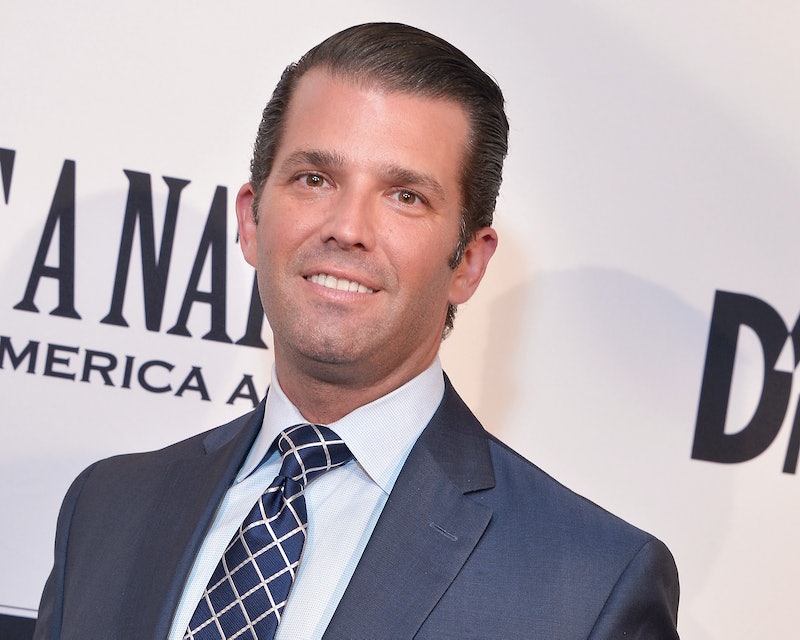 The Trump family has stayed a lot quieter than its patriarch when it comes to the allegations against Judge Brett Kavanaugh (which he denies) and the ongoing confirmation process. But one family member who has been joining the president in addressing the story is Donald Trump Jr. In an interview released on Monday, Trump Jr. said the Kavanaugh hearings make him more worried for his sons than his daughters. He implied his sons were vulnerable to false claims, which angered many, Twitter reactions show.

Trump was speaking to DailyMailTV while out on the campaign trail with his girlfriend Kimberly Guilfoyle, a TV anchor who used to co-host Fox News' The Five. He was in Montana, speaking in support of Republican U.S. Senate candidate Matt Rosendale, when he gave the interview.

"I’ve got boys, and I’ve got girls. And when I see what’s going on right now, it’s scary," Trump Jr. told the interviewer. Then, he was stopped to ask who he was scared for most — sons or daughters. "I mean, right now, I’d say my sons," he said.

The interview is spliced together, but at another point, Trump Jr. said, "For the people who are real victims of these things, when it is so obviously political in cases like this, it really diminishes the real claims." The clip uploaded Monday morning was just a portion — the full interview will be aired on Monday and Tuesday.

Guilfoyle also shared her opinion. "I think it's important, in terms of doing an investigation, to get the facts out there and find out," Guilfoyle told DailyMailTV. "It’s very tough 35 years later, but it doesn't mean it should be ignored, but people need to be careful to understand the politics involved as well, and what motivations people may have."

Twitter was full of users criticizing Trump Jr. for what he said. "If you fear your sons will be credibly accused of sexual assault you need to do a better job of raising your sons," user Chris Jackson wrote.

"If @DonaldJTrumpJr raised both his sons and daughters correctly he wouldn’t have to worry," wrote user @MauiWheaten.

"Donald Trump Jr, is more afraid of his sons getting accused of sexual assault then his daughters being sexually assaulted, and I think that speaks a great deal to what this family teaches their males," added user Katie Noel.

Others pointed out that just 2 to 8 percent of sexual assault allegations are thought to be false, whereas some two-thirds of sexual assaults are never even reported. Bustle reached out to Trump Jr. through the Trump Organization for comment.

Trump Jr. is not alone in focusing on the allegations against Kavanaugh as being more of a problem for the accused, rather than those who are doing the accusing. "Judge Kavanaugh showed America exactly why I nominated him," his father, President Donald Trump, wrote on Twitter after the hearings last week. "His testimony was powerful, honest, and riveting. Democrats’ search and destroy strategy is disgraceful and this process has been a total sham and effort to delay, obstruct, and resist. The Senate must vote!"

Before Ford and Kavanaugh testified, Trump was even more blatant. "The Democrats are working hard to destroy a wonderful man, and a man who has the potential to be one of our greatest Supreme Court Justices ever, with an array of False Accusations the likes of which have never been seen before!" Trump posted late last Monday.

Trump Jr. may very well worry more about his sons, but it also fits into the Republican and White House narrative of false accusations.